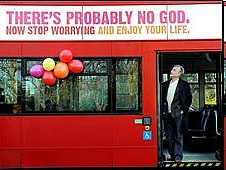 Yes, I know this is old news. But now you can’t go two steps in Oxford without being greeted by this merry little message on the side of basically every bus that zooms past – and every time I see it I just get extensively cracked up!

I mean, seriously. “There probably is no God.” What kind of gung-ho message is that?! Honestly – they’re practically begging every resident of the UK to seriously consider Pascal’s Wager . . . which you know they never would have done in a million years otherwise.

What kind of atheism is this anyways? I think they need to get out more and read a bit more Nietzsche. Nietzsche would never have settled for a peppy little message in pink that contained the word “probably”. And that little word “probably” is no doubt unsettling numerous middle aged women across the nation who had never given it a thought up until now, and are suddenly wondering every five minutes if they’re willing to bet their soul on that very uncertain message.

They’re also selling t-shirts by the way. It’s quite hilarious that now there’s a category of atheist kitsch. It must mean that all those Christian billboards and John 3:16 shirts are working far more than I suspected they were. The atheists have finally had it up to here, and are now copying the pop evangelical methods of getting the message out there! It’s kinda fun to have it go that direction for once. It used to be that across from every music store in every mall there was the Christian answer to it – full of knock-offs and almost-as-good-as paraphernalia. But it’s quite hilarious to think of the atheists then having to put up their own little kiosk with their not-quite-as-powerful answer to the evangelicals . . . tacky little key chains with humanist slogans and “I’m pretty sure there’s no Hell” bookmarks and inspirational posters that say things like, “I don’t think that Final Judgments are very nice to think about.”