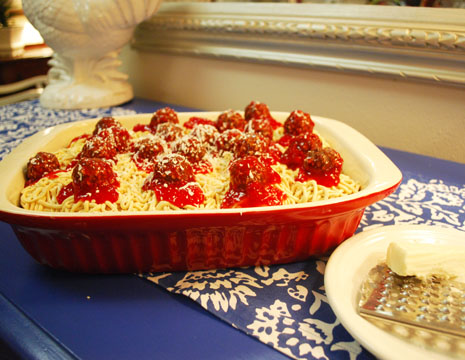 (They’re not spaghetti and meatballs at all. They’re Jemima’s birthday cupcakes.)

You all are getting a little foretaste of the “joke” that Jemima is going to play on her class today at lunch. Are you making sure to notice the grated “parmesan” that’s actually white chocolate? Huh? Huh? Are ya? I have to say, these are turning out a great deal more spaghetti-like than I first imagined they would. The meatballs are those hazelnut chocolate what-nots, rolled in low-sugar strawberry preserves. (The low sugar preserves give the best color apparently.) The frosting is very wildly squirted out of a ziploc bag with the tip snipped off. Not bad, I have to say.

Jemima has always really reveled in the fact that her birthday is on April Fools, and she’s always dying to try to trick somebody. The absolute rudest one on record so far was entirely my husband’s fault. This was before we moved to England, so Jemima must have been turning 6. That meant that Knox was 7. Are you with me? There were five children, and the oldest was 7 and the youngest was 1. Ben got Jemima to call both of her grandmas in turn, and he had prepped her with this little message: “Hi this is Jemima. Um . . . Mom and Dad left to go get a mocha and they said they would be right back, but that was a really, really long time ago and they’re not home yet and the toilet is clogged and now it’s overflowing and everyone is crying.”

Now, come on. Is that rude, or is that rude? Granny, Ben’s mom, was in town visiting . . . and she was over at Ben’s sister’s house when she received that pitiful little call. She was at our front door in about 45 seconds flat – at which point she was very rightfully peeved at her badly behaved son. When Nana got the call she instantly flew into action with lots of “Stay right where you are, don’t move, I’ll be right there . . . don’t get off the phone, hang on, just a minute while I call Papa on the other line . . . . ” Somewhere in there Ben finally had Jemima say, “April Fools!” and then Nana was very rightfully peeved at her badly behaved son-in-law. I, meanwhile, was very rightfully peeved that anyone actually believed that I would have left my 5 utterly incompetent children unattended while I went off to get a mocha!

34 thoughts on “Spaghetti and Meatballs Anyone?”