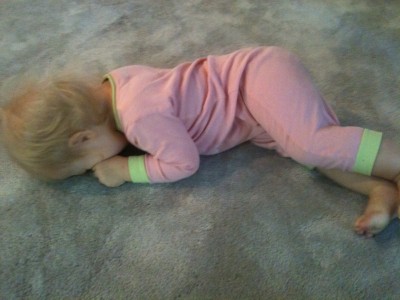 This is Blaire, captured via iPhone throwing her first drama queen tantrum. She was full of angst about not getting to eat the wormy pear she snagged outside.  The good news is that Blaire has a Daddy who loves her, so she won’t be doing much more of this. Limited time release and all that. Of course she will be doing a great many more things for years to come, but sufficient unto the day is the trouble thereof!

Many of us come from backgrounds of rigid discipline and high expectations. Others of us may not have ever experienced house rule, and have no idea how to set them up for our children. It is easy for us to be in one ditch or the other – either all law and no grace, or all “grace” and no law. But the point is really to be somewhere in the middle. How do we do this?

The central thing that we need to see is our own temptations, and parent in a way that sanctifies us, and that fights against those temptations. If you are prone to massive chore charts, laminated couches, and military whistles, maybe your parenting could use a little finger painting, and a little laughter. But if you are prone to smile tenderly at a child who is throwing a full on tantrum (see my exhibit A), and toss them a cookie, perhaps you should look into disciplining yourself to follow through on something.

Now clearly half the battle here is figuring out what you are actually doing. If your home is a sort of military regime for drones, you could feel like all that was ever happening is insurrection and disobedience, because every little step out of the lines you created seems monumental. And you made so many lines that half the steps your children take are outside them. You might not see yourself as too disciplined, but rather very disordered. When someone suggests you loosed up, you might think “What!! We are already going to the bad place in a disobedient hand basket! Loosening up would be the end!” You might think you need to do some serious tightening up, but that will only make things worse.

And if your child is throwing routine tantrums, you might still see yourself as a hard line parent because sometimes you yell and scream and discipline in anger. But the truth is, you are just hard in the wrong way. You need to loosen up somewhere, and tighten up a whole lot somewhere else. While other people see you bribing and arguing and threatening and then not following through, you might feel like you do nothing but discipline. You might think that you follow through because you threaten, or take things away, or generally dislike your children.

Or maybe you think that you are the most generous, kind hearted, and understanding parent around. You think you are ladling on the grace by letting your six year old lie down on the floor during church, or your two year old hit you (venting their frustrations and all that). You feel like your children will love you because you always give gentle admonitions that are never heard. But anyone else could tell you that your children look unhappy and unloved.

But here is the thing. Law and grace are friends. They were always meant to go together. If the law is the skeleton, grace is the flesh. Without the law in there, the grace is just a blob. And without the grace, the law can’t move. It can’t carry grace anywhere.  If there is not law, there is no grace. And without grace, the law is dead. Now parenting needs to represent both the law and the grace to your children.

Think honestly about the law in your family. Do your children obey you? Your first instinct might be to say “Of course they do!” But think a little deeper than that. When you tell a child to do something, do they do it? Or do they do it after you begin threatening? Do they do it when you start to look serious, or when you stand up? Do they do it after you bribe? Are you bolstering up your commands with dangling carrots or looming paddles? Do you find yourself talking and talking and talking about it? Does it take you twenty minutes to get a child to take a bite? Twenty intense minutes with furrowed eyebrows and raised voices?

What tends to happen with situations like this is that the parents get aggravated, and end up disciplining. They may still feel like they really enforced the old law. But the truth is, they bullied. Instead of simply, cheerfully enforcing a standard, they eventually resorted to force to get their way. That is not the way authority acts. When parents see themselves as an authority, they are enforcing their position, not their personal whims. God wants you to be in authority over your children, he put you there. This is not a position you are striving to get into. You are in it. Act like it.

If you do not have a solid structure of godly authority and law and you try to just be easy on your kids, the problem you will have is one  of boneless grace. You think that you are ladling on the love and acceptance and grace, but you aren’t. When God gives us grace, it results in fellowship with Him, forgiveness, and joy.

When we ignore sins our children are caught up in, that is not giving them grace. That has a different name, and it is judgement. Think of Romans 1:24, “Therefore God gave them over to their sins”. That was not an example of grace. Sin is like water. Children can drown in even a little bit. Looking away when your kid is stuck in some petty sin is like walking away from a kid floundering in really shallow water, and it is not grace. If you love your children, you grab them and haul them on out of that. You get them all the way out. You don’t watch from the house to see if it gets a lot worse. You don’t decide that it is their problem, and wish them the best. You don’t decide that there will be more time another time to get them out of that water another day. You don’t sit beside the pool and chat to friends or post about it on Facebook. Grace is action.

Grace is not a facilitator of sins, it is a solution to them. A good parent has two weapons to help them fight sin on behalf of their children. One is law, and one is grace. The point of both is restoration, forgiveness, and joy. If you don’t see those fruits in your home, then you need to reevaluate what you are wielding.