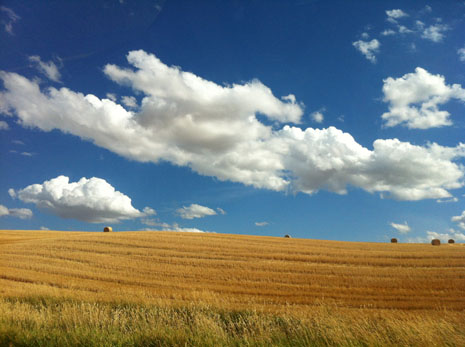 Once upon a time, in a church far, far away, there lived a not-very-attractive middle-aged woman who was terribly insecure. She seemed to both resent and fear any and all attractive women, and she also considered herself to have “the gift of rebuke.” Because of this happy combination of character traits, her duty was clear. She appointed herself as the Modesty Sheriff, and she diligently and patiently informed the women in her church whenever she felt that their skirt was too tight. Or when a slip or a strap was showing. Or if they needed to be more careful about their posture. Needless to say, no one liked her much, and behind her back she was called Cranky Fun-Buster.

But she doesn’t come into this story at all.

In a different church (your church actually) there was a very young and very cute girl. So cute, indeed, that whenever she went to the mall, random pimply teenage boys would ask for her phone number. When she walked down Main Street, truckers honked and whistled. She kinda liked it. Well ok, let’s be frank. She really liked it. So much so that she started to really work it. She noticed that the shorter her skirts were, the better the reaction, so she began to shop accordingly. The skimpier the bathing suit, the better the day at the beach – which made her bathing suit choice a no-brainer. She filed away all those whistles in her heart, and when she thought about them they made her smile. Her shirts got tighter, and as she walked down the street she learned to spend most of her time in her peripheral vision – anxious to see if any guys were noticing her.

Of course she couldn’t say any of this out loud. If she’d been a pagan cheerleader down at the local highschool she could (and would) have talked about it all day long. But she was a Christian girl, so she had to pretend that none of it was happening. It was tricky to do, but she mastered it in the end. Her solution was elegantly simple – what she did was to burn down the bridge between her internal self and her external self. Her internal self counted whistles. Her external self said, “Geez Mom – it’s not about that at ALL. What do you think I am? I didn’t even notice that he was looking at me.”

Of course, all this meant that her nickname really should have been Hypocrite Pants, but she was very careful never to let anyone get a glimpse into her internal self and she had mastered a very sincere and genuine facial expression which fooled many people. As a matter of fact, she had also managed to fool herself. She carefully avoided ever noticing that her internal self flatly contradicted everything her external self said, and vice versa. Her internal self practiced her best sultry-pouty-lip-face in the bedroom mirror, her external self practiced her wide-eyed, slightly tearful, I-can’t-believe-you-would-even-say-that face which she used when speaking with her parents.

Every so often this girl heard some older woman speaking about modesty. If she thought about it very much she would inexplicably get very angry, so she cultivated an ability to not listen. If and when that failed, her next defense was to pretend that this woman was in fact The Legendary Cranky Fun-Buster. (Everyone has heard of Cranky Fun-Buster, even though very few of us have actually met her.)

This young girl grew up, and as she did, her addiction to male attention grew as well. But so did her knowledge of Scripture and theology. She grew past her, “la la la I can’t hear you” defense, and began to manufacture a defense of the way she dressed that sounded much more mature and Scripturaly relevant. She said things like,

“For pity’s sake – the verse about modesty is NOT about cleavage. Grow up people! Paul was actually speaking about ostentation which is really a heart attitude more than anything.”

“The Bible has ONE verse on modesty. Count em – ONE. Would everyone please stop panicking about bikinis? Let’s be mature people – please.”

“The Bible never tells us what modesty actually means – and these things are obviously societily determined. Latching onto a particular dress code simply creates a legalism which is far more deadly than legs.”

“Lust is definitely a problem, but it’s really the man’s duty to guard his heart and be righteous. We women can’t be responsible for a man’s thought life. That’s really between him and God.”

This tactic worked for the most part. When the young woman ran across posts like this online, she groaned and rolled her eyes to all her friends on facebook about the embarrassing naivete displayed by women who get “so wound up” about modesty. She was aggressive enough about it that lots of ladies who ought to have known better felt kind of stupid about the whole thing and so they chimed in with their agreement. What we all need to do, they agreed on facebook, was to worry less about modesty. Let’s be adults for heaven’s sake.

But then one night something very awkward happened. A very difficult fairy named Be-Sure-Your-Sin-Will-Find-You-Out visited her while she slept and tapped her with her Wand of Consistency. When the girl woke up, she had a thought bubble above her head in which everyone could read every thought which passed through her brain. As she stood in front of her closet deciding what to wear, her roommate saw the thought bubble say, “Ooh – I’m walking past that construction site today. Definitely the tight jeans. And heels. And I’ll wear my hair down. They won’t be able to handle it.”

Well you can imagine how embarrassing this situation was. The girl was so deeply in the habit of thinking this way that she absolutely couldn’t stop herself. And everyone all day long saw every licentious thought which passed through her head. At church everyone saw her comparing herself to the married women and speculating about whether the husbands were struggling with contentment. Everyone saw exactly what was going through her head as she walked past the row of college guys – as she imagined to herself what they were thinking. (AND they all saw her spell “hot” with an “aw” as she pictured to herself what was going through their heads.) Everyone saw her compare herself to every other girl in the room. They all saw the flicker of fear when she noticed a girl prettier than she was.

And suddenly everyone saw that girl exactly the way God had always seen that girl. As Hypocrite Pants. And suddenly all her mature statements about modesty became simply pathetic – obvious and embarrassing covers for her own lust problem. Everyone saw, in horrible clarity, the truth that a lustful man lusts after a woman – but a lustful woman lusts to be lusted after. And everyone saw – as clear as day – that her biggest problem certainly wasn’t the bikini that they had all been worried about. It was her hard heart. And her pride. And her self deception. And her dishonesty. And her lust.

Choose your own adventure: How does it end?
1. The girl broke down and repented. She gave up all her inconsistencies, all her self deception, all her self righteousness, and prayed that God would help her to die to herself every single day. She prayed that God would convict her whenever she started down that path again. She took down all her stupid facebook self-justifications and threw away all her immodest clothes. She prayed that God would help her to be honest with herself, and that she would learn to differentiate between beauty, which God loves, and immodesty, which He hates.
2. The girl pretended the thought bubble wasn’t there and continued on just as before. Only no one would talk to her anymore.