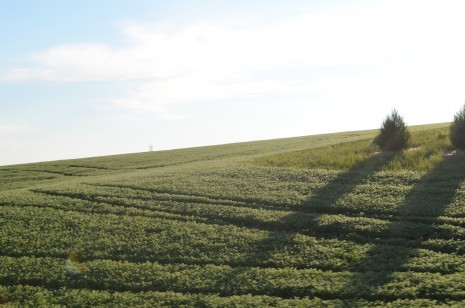 Many years ago when my husband was both in high school and working at a Chicago food restaurant, he burned himself badly. It was an exciting tale of the gas hose being loose and popping off behind the stove when a mop handle hit it, and the gas coming out of said hose while he crawled back behind the stove to fix it, just before he realized that the pilot light was still burning. He had flash burns on his face, and some second degree burns, as well as missing eyebrows and eyelashes. He went to school the next day with bandages here and there and a lot of Bacitracin on his face.

His brother was at the same time running a political campaign at the school and saw his opportunity to have Luke advertise. So my husband stood outside of Chapel holding a sign that said, “Don’t get burned, vote for Mongold!”

Now one of the first results of this obvious stroke of genius was a furious girl who launched a rebuke.

“This isn’t funny, Luke! People really get burned!! It’s not funny, and you should be ashamed of using something that hurts people for a joke!” It took a few minutes before she believed him that he himself was the burn victim she so cared for, and I think she still left the conversation with a parting shot about it not being funny.

I bring this up because this is something that I have noticed lately and that I believe is a real problem in Christian circles. Whenever someone says something about anything that might be interpreted as a standard, Christians bring out the victims. A Christian woman says girls should be modest, and all everyone wants to talk about is sex trafficking tragedies. A pastor says our kids should not be in day care, and we can only see the women who have been abandoned by selfish men. Someone says we should be thankful for bread, but the conversation becomes entirely about the sorrow of the people who were put in a coma because of wheat allergies.  Someone says wives should submit to their husbands, and the whole world shrieks and waves their arms about battered women. We act like serious Christians don’t have the time (or the malice) to talk about little details of the Christian life. But Scripture takes the time to mention it, and I think it is important that we not shrug it off like we know better.

The thing is (and the heart of the matter), is that the hurt people are often not putting themselves there. They are brought out. They are held up as a human shield between Christians and conviction of sin. If there is teaching that might sting us, we want the weakest and the most hurt people to get in front of us and absorb it. “Don’t shoot! You’ll kill her! And she has already been through so much! You are so heartless!” But the person who is seeking to honor God in the details of their Christian walk is actually the one showing compassion.

The problem here is that many Christians have bought into the thinking that true compassion always talks about the saddest victims. If your heart is tender toward the troubled, the sinner, the molested, and the needy, then you bring them out by the neck, hold them in front of yourself, and refuse to be held accountable for your own sin.  This is how we do it. What a refuge we are.

But the reality is that people are hurt by other people who do not take sin seriously and do not hold themselves or others accountable for it.

Christians should stand like a shield wall of faithfulness around the people who have needed that their whole lives. It is not kindness to use these people as excuses. It is furthering their status as victims, as the hurt, and as the reason we may indulge in sin. It does not matter if the sin that hurt them was a billion times worse than the sin you are currently committing. Hate your own petty sin like you would hate an infestation of bed bugs, because that is what it is like in the life of the church. This is what makes a comforting place a hell hole. This is how you change a restful place into a place of nightmares. By hiding sin. By refusing to deal with it. By thinking it is so little that it won’t make a difference.

Now, I know that many of you are probably already feeling angry about this. So let me assure you, I do not believe that everyone who does this is intentionally trying to shield themselves. I believe that we have lost track completely of what compassion is. We believe this is it. We believe compassion means getting bitter on behalf of people who have been hurt. We believe it means always using their story, Always holding them up as our mascot of the messed up. Opening their wounds up whenever we would like to stop a conversation and look kind at the same time.

Jesus Christ is the only answer to the brokenness of sin. When people have been ruined by sin, our answer should not be to only say Jesus to them, but to live like we know Jesus. We need to stop saying “Grace” to them, and actually  be Grace to them.

20 thoughts on “The Human Shield”