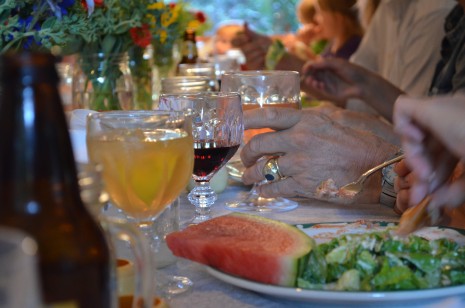 Back when I was in high school my Dad became convicted that we should be honoring the Lord’s Day more than we had been. Having grown out of a Jesus people kind of church that met in the parks sometimes, we were growing into Christian traditions that were much older and unfamiliar, and often seemed painfully stuffy.

It was true that Scripture clearly said the Sabbath was for rest. Of course we all had visions of Little House on the Prairie and very serious times past. It seemed to us that the only people who would be Sabbatarian were people who would wear horsehair shirts, scowl at children, administer discipline for laughter (as well as most other things), eat only boiled food, have no fun, and probably cause routine church splits about whether the bulletins should be tri-folded to reflect the Trinity or not.

In the midst of some angsty discussions around the dinner table Dad pointed out something that has stuck with me all this time “But what about homework, Dad? Are you saying that I’m not allowed to do homework on Sunday??!” He responded that it wasn’t that we didn’t get to work, it was that we got to not. It was hard to ignore this. I am not normally chafing at the bit to do homework, yet tell me that I may not and my desperation to do it becomes unbearable.

But at the end of the day we all just found it hard to argue with one of the Ten Commandments. It it is abundantly clear that the Sabbath day is a whole day to be kept holy, and a whole day to rest. We began implementing some guidelines, which we mostly still follow, that were simple rules of thumb. If it is your normal work, don’t do it on the Lord’s Day. We begin our Sabbath at 6:00 on Saturday and celebrate it through 6:00 on Sunday. So Saturday is a crazy day at the end of usually crazy weeks, and often times when we all roll into Sabbath dinner, we do it in a manner that we call “Crashing into Sabbath.”

Preparing and cleaning up Sabbath are part of the celebration of the day, not the normal work of life. And so we are willing to spend a big chunk of our Saturdays getting ready for Sabbath. Making food, getting our house ready if we are doing it here, getting children showered in the afternoon, making sure enough laundry is done for everyone to wear clothes in the morning.

Sabbath dinners have, by God’s grace,  grown into us. My parents began doing these dinners back when Ben and Bekah were newlyweds, and truthfully things began picking up speed pretty quick after that. At the beginning it was an effort to still see each other regularly even though our adult lives were starting to spread us out. And now it  has grown into something that is as much a part of us as it could be. We order our lives around it. If we go out of town, we hope to make it back in time. My kids think of it as the beginning of worship, as the best part of the week, as a destination, as a bookmark, as the ultimate comfort food,  and as who we are.

But something else happened to me along the way. It was one thing to lay down your schoolwork on the Lord’s Day – but come now. I am a mother of six children. They don’t stop. There are dishes and laundry and floors to sweep and toys to sort and all kinds of things that always need to be done. I found myself saying things to myself about not being able to stop, because it doesn’t work that way anymore. I still considered the Sabbath a day of rest, but I had slowly let it be a day of rest plus. Rest plus talking about how I couldn’t stop. Rest plus maybe a tiny bit of resentment that there doesn’t seem to be such a thing for me anymore. Rest plus unrest. Clearly this was not right.

At some point, chatting to my husband about this, he pointed out that obedience comes first. He told me just to start by laying it all down, by not thinking about it, by letting it go, and see what God does with that. And you know what I discovered? I discovered that what I didn’t see was what kind of rest I really needed. Obedience without excuses has a wonderful way of giving you better perspective.

To be clear, we still aren’t people who blow an air horn if we see someone loading a dishwasher on the Sabbath. Sabbath was made for man and not man for the Sabbath. But something that I have grown to see is that God was offering me something that was so much better than what I was hoping for. I visualized some kind of pure retreat somewhere where everything is clean and you forget that you ever have worked. What God has given me is totally different but so much more refreshing. Honoring the Lord’s day with all of the “inconveniences” that brings to a busy household has given me all of the energy I need for that busy household.

When six o’clock rolls around on Sunday night, I love the sound of the dishwasher starting and the laundry rolling and the smells of the work week coming at us. Taking the day off on Sunday has given me a deeper love for the days on. Monday morning enthusiasm for housework and routine. Digging out of the celebration of the Lord’s Day is in itself a refreshing thing. Turns out, greater obedience in this area gave me greater insight into what kind of rest I actually need. I don’t need a clean space, I need an obedient one. I don’t need a perfect haven of restfulness, I need a heart of rest. I don’t need all the external resources to celebrate the Lord’s Day without consequences. I need the consequences of the Lord’s Day for the rest of the days to be joyful.

I just found that picture up at the top in my old photos. My Grandpa’s well-worn, always-warm Naval Academy ring. A summer sabbath at our house, and it reminds me of one of his favorite old Navy quotes, “Goodie goodie, Monday morning, and another week in which to excel!”

Of course I would change it only slightly to another week in which to obey.