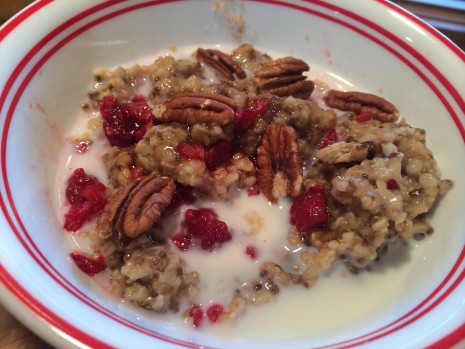 Breakfast is a crazy time in our house, and while we have tried all kinds of different things, we had settled into oatmeal most mornings. While my kids love cereal, it isn’t really a great choice. It makes me think of when I passed out in the bathroom at school, and it is certainly not a cost effective choice when you have a pile of children who can eat. So oatmeal was our game. Old fashioned oats from Costco. And it worked. It was fine. Whatever. Sometimes we burned it while I was doing hair away from the stove. Sometimes we didn’t want to clean out the burned oatmeal pan. I tried a crock pot oatmeal thing but we didn’t like it, as it was super gluey and weird.

But there has been a revolution at my house. Maybe revelation would be a better word for this. Either way, I wish I had found out about this ages ago because it is working so ridiculously well that it almost makes me sick. And I’ll tell you the truth – this surprises me. It isn’t that uncommon for me to try to cook up a scheme that will fix some problem. And it is also not uncommon for the scheme to do nothing of the kind. So when this worked even better than I had hoped and dreamed, well… I’m pretty thrilled.

I happened upon someone on the interwebs casually referring to the porridge setting on a rice cooker, and I said to myself, “Hang on, hang on!” I had a basic 10 cup rice cooker that had been used and abused to within an inch of it’s life, so I thought I should look into this whole scene. I bought myself a new fancy rice cooker – a 10 cup fuzzy logic one from panasonic. This was not a super cheap rice cooker, but it makes great rice (noticeably better than the last cooker), great quinoa, I even pulled off a risotto in it the other night. I am confident that if I ever felt the need to use the cake button it would do what it is supposed to do. But none of these things have endeared it to me quite like the daily breakfast application.

What I do is load it up at night with steel cut oats and other yummy stuff, set the timer, and go to bed. It will soak overnight, but then turn on and cook it in the early morning so that it is ready and just keeping warm when we get up.

Now the reasons this is so brilliant are abundant. First, it only cooks the oats in the amount of time they need to cook (this was my problem with the crock pot method). Second, I bought a 25 lb bag of steel cut oats at Winco for $15. That is 50 breakfasts for all of us – crazy cheap. Even when I add tons of good stuff to it it still probably works out to a dollar a day. Feeding 8 people, that’s pretty great. Then there is the fact that this rice cooker has a battery in it. So it keeps track of the time and remembers the time that I set last time. So after I throw the stuff in, I select the porridge setting and then hit timer and up comes 6:10 like always and I hit start. So it’s not like I am reprogramming the clock every night, which would annoy me immensely.

Then there is the fact that it is totally delicious and actually full of protein. The oats themselves are high in it – about 7 grams per adult serving, almost as much as a glass of milk. But I throw in flax seed and chia seed (both protein rich), as well as a little  PB2. We put a little salt, vanilla, brown sugar and cinnamon in, and then when it is out top with Craisins and nuts if we have them – or my favorite, frozen raspberries pushed into the hot oats with some pecans. I’ll know tomorrow if the honey nut version was a good idea or not.

Guys. I’m telling you. This is solving problems for me I didn’t know I had. Luke summed it up nicely when we were in the kitchen one night and he patted the rice cooker and said, “This thing has paid for itself in the spiritual and emotional benefits alone.”

So now you know. I’ve got new problems to solve, but this one… case closed!