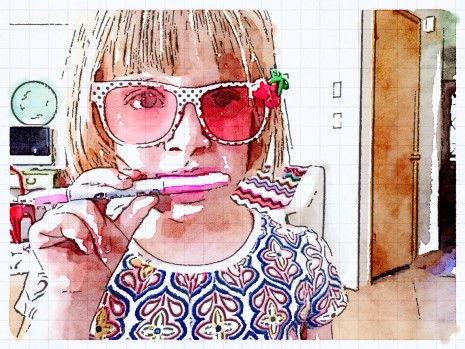 Occasionally when someone who is holding their first tiny baby tells me that they read my book I can’t help telling  them not to judge me. I remember so clearly when motherhood was a new thing to me and I seriously could not understand a mom getting frustrated. I was still just eating the appetizers of frazzled, and tired, and emotionally expended. I knew the feeling of being touched too much, but had not accounted for that same nursing around the clock feeling being accompanied by a people trying to brush your hair, children climbing on your back, children leaning on you and whispering into your ear, or just general disobedience in the line of sight. I really truly had no idea how much deeper that pool would go. Cold ankles is one thing, but when it gets up to your stomach and knocks the wind out of you is another.

Some people feel this at two kids, or three. Four was the magic number for me, since with the twins I never experienced three. Anyways, if this is where you are, or even if you are past that now here is a short list of things that I found to be helpful in maintaining joy as you slog.

1) Confess actual sins, not feelings. Mommy guilt is probably familiar to us all. Lying in bed at night just thinking about how bad you are and how your kids deserve better and what a mess the whole situation is.

For example, you might be feeling guilty that you were tempted to be unkind to your kids and that you did not feel like getting a cup of water for so and so. Remember that temptations are like birds flying over you – do not let them nest in your hair. The thing is that you can feel really bad that the big ugly crow of resenting your children was circling your head. But what you need to do is not confess that you saw it in the air, but continue to resist letting it land. Sometimes, the confessing of something like this turns out to be a sort of invitation to let it nest. We turn our attention at night to something that really was a passing temptation and we own it. We ask it to land so we can really get a look at it. We pick through it’s feathers for bird fleas. And then we wonder why all this prayer isn’t giving us peace. Well honestly, it is  because we aren’t so much praying to God as we are paying great homage to our sinful inclinations.

So here is some simple suggestions to combat this kind of temptation:

First, try not confessing sins at night. If you sin in the day, make it right when it happens. If you snark at a kid, ask them and God to forgive you the moment that it happens. Make your nighttime prayers a time for thanksgiving and rejoicing over your blessings.

Second, if you feel yourself slipping into self pity or resentment in the day, sing a hymn or a psalm. Change the station inside your head to gratitude and worship. I often turn on pretty cheesy kid’s christian music and sing along with the kids.

2) Keep a sense of humor. I know this comes more naturally to some than to others, but cultivate your ability to laugh at yourself, laughing at the diverse and outrageous situations you can get into in a day. Laughing at the desire your children have to make enormous messes will really keep you from becoming a very tedious parent and spouse. Laughter really is good for the heart, and if you have little children you have opportunities for laughter crowding in on you all the time.

Yesterday I opened a new can of Diet Dr. Pepper, and went to hustle upstairs. I sort of stubbed my toe on the first stair, letting the sole of my flip flop peel down and make it impossible to recover. I wiped out on the stairs – not half way, more of a full bodied whip lash onto the wood steps. Luckily, channeling all the inner angst of the moment, I was able to squeeze the can so hard on the way down that I completely crushed it. Dr. Pepper erupted as I fell – straight into my face and raining down all over my head. It hurt like crazy, but it was spectacular. I had to laugh at the fact that God composed that moment. No one saw it but me and Him, and I know He was laughing so I better do that too.

Once Bekah was trying to get something out from under the bed in their guest room when she was 8 months pregnant. She was using a hanger, and all bent and twisted under the bed. Just then her young son came and climbed up onto the part of her that was sticking out and perched. He could not hear her asking him to move. “What mom? Did you need something? Mom? Where have you gone?”

There, surrounded by dust bunnies and a unique panic, her contact popped out. It is at times like this that you have to get out of your immediate dust bunny surrounding and really appreciate the whole picture. God is joyful. Sometimes we laugh at the jokes he writes, and sometimes we are them. Either way, it is good to thank the Lord and to laugh at His jokes.

If you just don’t find your life funny, try. Try writing down the funny story. Try telling it to someone with the point being laughter and not pity or sympathy. Try laughing with your kids about it.

3) We all know that mothering takes a lot of sacrifice. We want to follow Christ, and so we want to sacrifice for Him. But it is incredibly easy to start to think that sacrificing what we want to is the same thing as obedience. This is how it is possible to latch onto an idea of what you should be doing – maybe a nice meal or a decorated room or something, and then be angry at all the people who are getting in the way of you sacrificing up a little something special for them. Sacrificing anything is not obedience, but obedience is sacrificial.

Following Christ is not the simple thing that we often think. We think “Jesus is our trail guide, and He is up there and we are way back here just keeping our head down and trudging along after him.” But Jesus is actively involved in your life. He is alive. He is here. Think of it more in terms of a dance – where the leader may be pushing you to take a step back, to turn, or to go forward. Following Him does not mean that every step you take will be forward.

Early on in my mothering life I had to follow Christ to lay things down that I didn’t want to. Lay down your body. Lay down your perfectly decorated house. Lay down your enjoyment of shopping. Lay down cooking ridiculous and involved meals. Lay down your life. And now, I am in a new place where much of what I struggle with has to do with picking up the things that I laid down then. Then He wanted me to lay it down, now He wants me to pick it up.

The important thing is staying in fellowship with the leader – responding to ways that He is prompting you. Just as a bride glorifies and adorns her husband, so our obedience to Christ glorifies Him. We tend to want to do the thing we want to do and then say, “for the glory of God” like an afterthought.

But the whole of the sacrifice glorifies God. The whole act of listening, responding, acting in faith – that is glorifying God. And that is the chief end of man! To glorify God and enjoy Him forever. Glorify Him in your obedience when you don’t want to. Glorify Him by responding in laughter. Glorify him by ignoring ugly crows of discontent and frustration. Glorify him by laying down your actual life in actual steps of obedience, even when they are backwards, or sideways, or not what you expected.