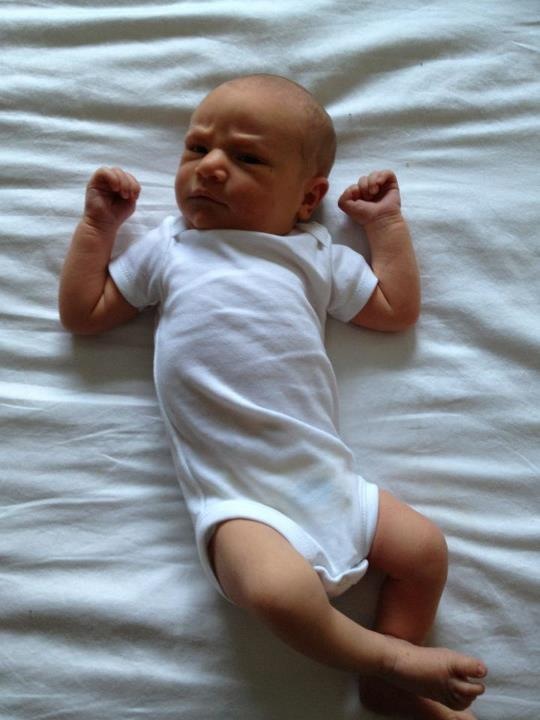 (Photo of my son, Shadrach – now a hearty three-year-old. Our #anotherboy is not due for another 8 weeks or so.)

Once upon a time, more than three years ago, I found out I was pregnant. I had been pregnant before of course, (and I am pregnant now too), but I remember this time as being particularly hard. I had five busy children all over the house, and this pregnancy thing is no little commitment. We love babies in this house, but we are forced to greet their arrival with a lot of realism. The hopeful mist of sweetness is very quickly dispelled by a period of really serious darkness. Because when our babies are the size of a poppy seed they upset the entire freight train of our household flow. I get sick. So sick. I can’t walk in the kitchen, think about food, hear about food, or eat food. I try to eat it of course, and I lose most of it right after. For my husband it means a few months of constantly trying to find things to feed me, feed the children, trying to handle the other essentials of life, picking up my part of carpool, etc. etc.

For this reason the positive pregnancy test tells us more about what will happen to us in the next three months (which will take a lot of courage and endurance), than it does about what is very sweetly coming in nine months. Of course it is the same news, but it is like saying there will be beautiful weather in nine months, and a hurricane for the next three. It can be hard to look past the hurricane!

Anyway, back to this particular pregnancy. I had just started being super sick. And of course the kids were all interested in what was happening. I turned on  a Nova film on YouTube (I think it was Life’s Greatest Miracle)  to show them some of the early phases of embryonic development. I skipped through the strange introduction (and all the dumb parts about sexual attraction) and to the part we were interested in.  Now this little film is not Christian, and it was constantly referencing the amazing workings of evolution, which is especially comic in this setting. But the thing that completely encouraged me at this particular moment was exactly this:  the inescapable beauty of this design.

I know the basics (one would hope) of human reproduction. But I had completely forgotten some of the intricate details. The fact that the egg is protected by a hard protein shell,  and that the only way it can be fertilized is if a sperm with the exact matching protein “key” finds it. That matching causes the sperm to release an enzyme that breaks the barrier of the egg and lets the sperm in. I had forgotten all the crazy details of the inside of the fallopian tubes and how all of those things work. It was shocking. And more than shocking, it was beautiful. Because as a culture, we have come to believe that pregnancy can happen on accident. That it is just something that can’t be resisted. And yet watching this impressed on me the total opposite. It is amazing that this ever happens at all!This could never happen without the active work of a Creator. As far back as you go in the process, all you will find is more and more complexity. More and more impossibly complicated design. More and more variables and insane improbabilities.

So there I was sitting on our bed, trying not to smell anything, sick out of my brains, and so thankful. Because the baby that was growing inside me was no accident. Nothing could be clearer than to see that this is an active act of creation. That God had called this little poppy seed into existence by name. That all of this was not a result of any kind of accident, but rather the perfect plan of a Holy Creator God.

And what was happening in my womb was not something we did. It was not something that God decided to follow through on, but that we started and committed Him to. God did this. And to be anything other than willing to receive His work would be shameful.

Talking to my Grandpa the other day, he mentioned Psalm 27. When you see all these sorrowful videos of Planned Parenthood, it is easy to have your heart broken for these unwanted children. But Psalm 27 says “When my father and my mother forsake me, then the Lord will take care of me.”

These children, all of our children and all of the children whose short lives end in a pie pan, are Fathered first by God. These are His children. They are called by name into existence – from nothing. And when that happens in the womb of those who love Him, they are received in love, a reflection of the love that the Heavenly Father has for them. And when it tragically happens that the father and mother forsake that little baby, they are still not forsaken by their first Father. He gathers them to Himself.

And so we can see that even when the road of pregnancy and childbearing and child-rearing is difficult, our faithfulness in it is simply a declaration of the love of the Heavenly Father. We love God for He loved us first. We love our children because He loved them first.

27 thoughts on “The Receiving Department”