While Mom was pulling out the lawn furniture I was taking my troop out on a much needed (nap-hookie) walk. We had gone quite a ways and I asked the girls how their legs were doing. “Are they tired?” I asked. Lina (3), from the right side of the stroller said “mine just keep bumpin’ along”, and Daphne (2) said “I could take my pants off.” 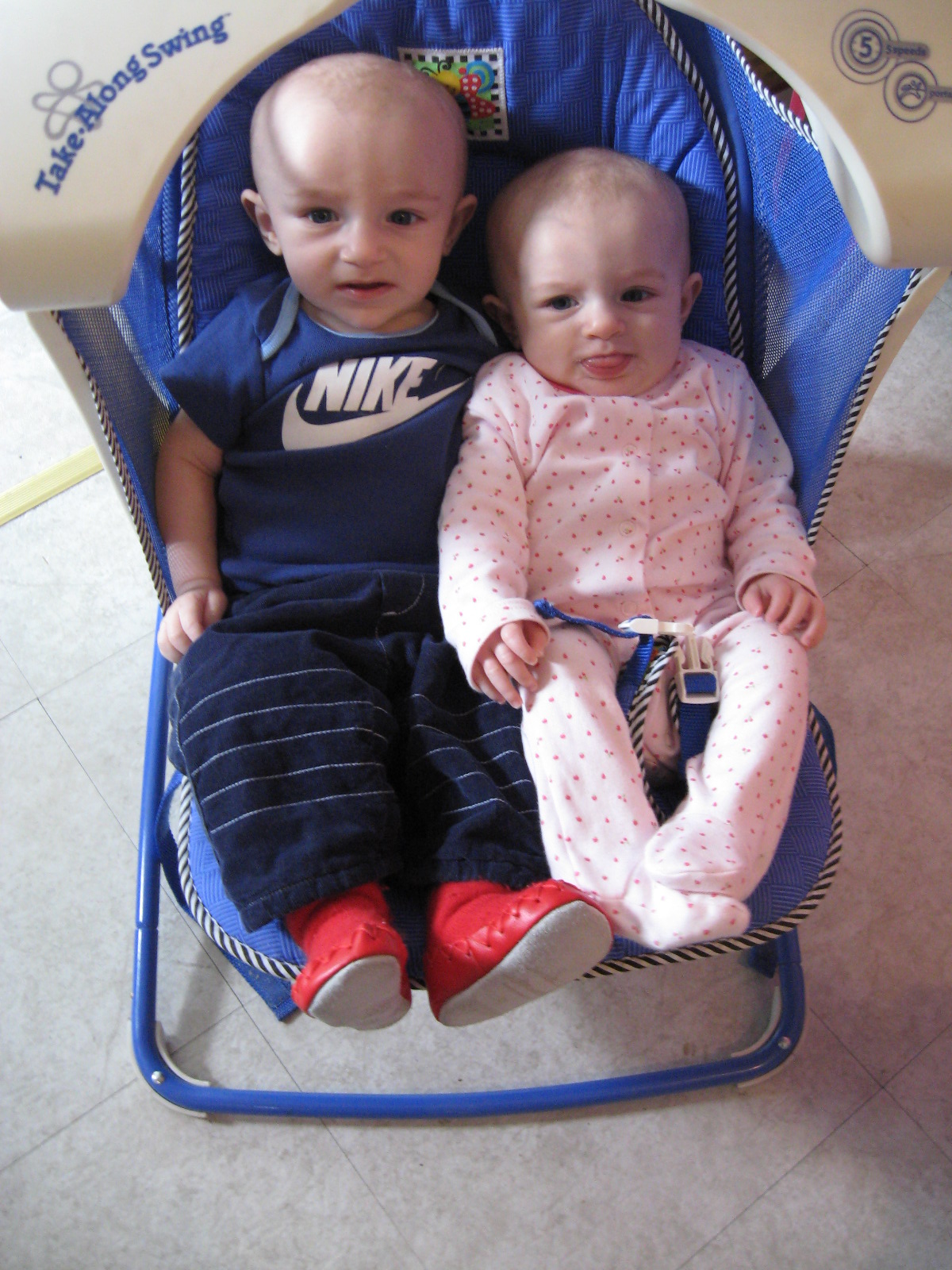 Here are the babies at four months. It isn’t your imagination – Titus really is that much bigger. Also, don’t panic about them both being in the swing, as that was only for the photo shoot. Besides, they were wanting to be together, and I was wanting to sing “zippity doo dah” to get some smiles for the camera! They are just becoming buddies now, finally noticing each other. Titus puts his hand on Chloe’s cheek and she smiles, they grab hands and then fight over who should chew on the four-hand fist, and end up just taking turns or putting their heads together so they can do it at the same time. It’s the sweet stuff all right! 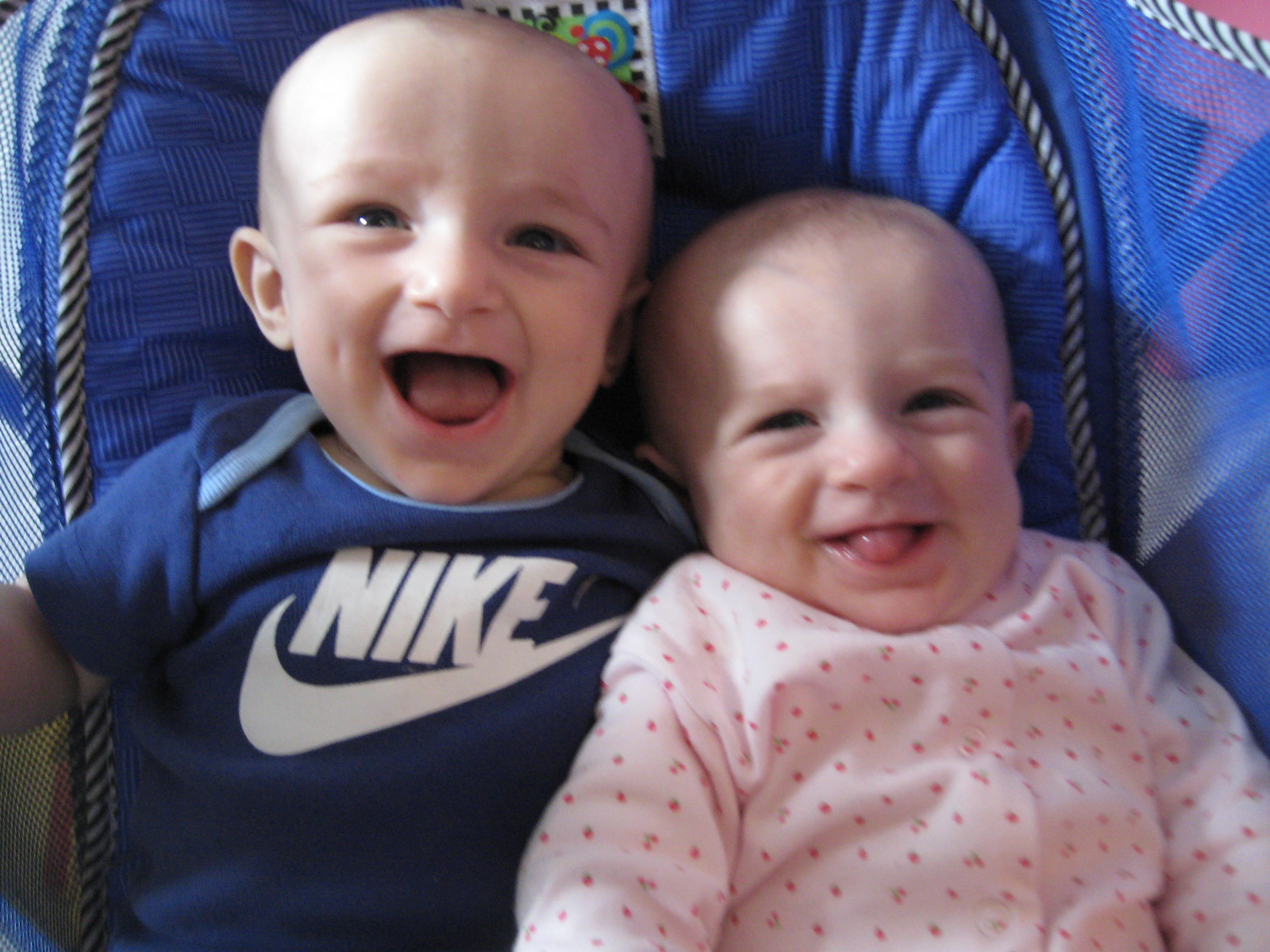 I know, it does seem a little MacGyvor of me to recommend that you bake bread using your food processor. I am not kidding though, it is the best bread you will ever make at home. END_OF_DOCUMENT_TOKEN_TO_BE_REPLACED

With all the encouragement we have been getting to celebrate Easter in a big way – to buy new clothes and dress up, make gorgeous meals, and fun activities for the kids, it occurs to me that something has been left out.

We are now officially into Easter weekend, and the time to shop for new clothes and lose weight has run out. Many of you are also recently post-partum and there is really nothing that compares to trying to dress up a body that is profoundly out of touch with itself. In my case, I believe that my stomach muscles may have lost their way in the world altogether, nevermore to rig it in.

Well, last night brought about something pretty hilarious at our house. I was sitting on the couch nursing the twins, and my husband and bigger girls were playing with balloons. END_OF_DOCUMENT_TOKEN_TO_BE_REPLACED

My life has been peppered with bad sugar cookie experiences. I love a good sugar cookie, but they seem like a holiday kind of cookie, so it took me many years of unsatisfactory holiday baking to come across my favorite sugar cookie. Usually it seems that they either break easily, puff too much to decorate well, run straight out of the shapes you cut and bake into one big blob-tag cookie party, or just don’t taste good.

This recipe is a combined two Christmas effort. Last Christmas I made cookies out of Gourmet magazine and hated the cookie, but loved the frosting. I saved the frosting recipe until this Christmas I combined it with a modified cookie from Country Living. Now I am happy. So happy that I make sugar cookies for all holidays now. For Valentine’s Day we made a batch of these and splatter painted them with neon pink and white frosting (we called them eighties revival cookies), and for Christmas I make half the dough red, and decorate them with a little more care. So… the moral of the story is that armed with a great recipe and a decent arsenal of paste food coloring you can achieve almost anything you set your mind to. END_OF_DOCUMENT_TOKEN_TO_BE_REPLACED 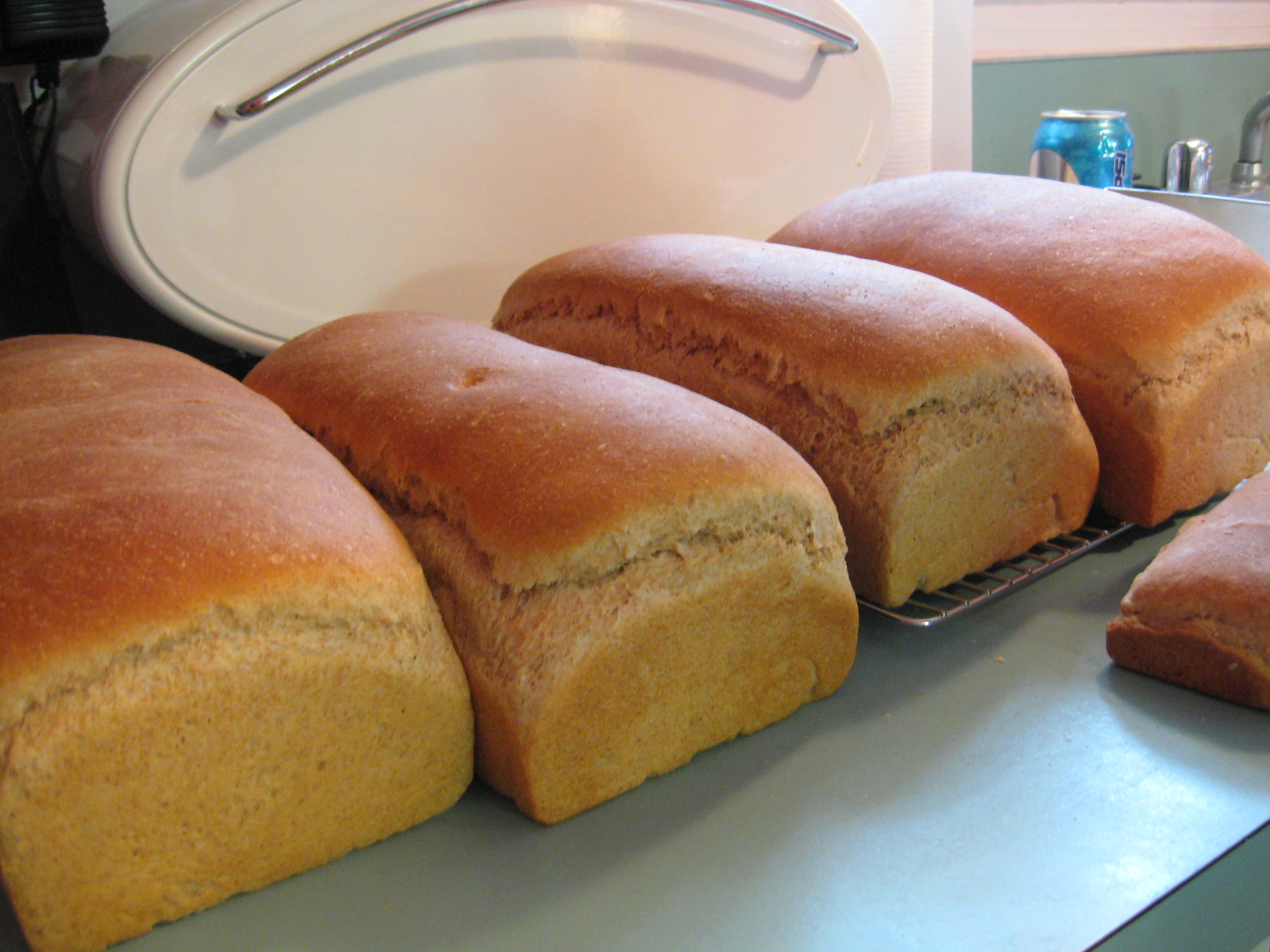 This recipe requires a bit of an intro. All through my childhood years my mom baked bread. I got the best part of this tradition, because as the youngest, I was home to help her while my siblings were off at school. I had my own baby loaf pan, and helped her roll out the dough and shape it. Sometimes I made bread men who were never very good because they were mostly crust.

Anyway, this wasn’t just a fun time, it was great bread. The kind that makes pbj’s worth eating (especially with raspberry freezer jam!). When mom made it on Saturdays, she always had Dad do the kneading.

The funny thing was that she just sort of stopped making it when we were a little older and she was a little busier. As I recall we were also going through a poorboy phase that lasted several years. Much later, when I wanted to make it, we found a little problem. Mom had had the recipe memorized, apparently lost the hard copy and didn’t notice. But, after a long sabbatical, she no longer remembered any details.

I tried to pioneer my own favorite loaf bread, but never liked anything I made as much as what I had grown up on. Eventually, I had a brilliant idea – I called my childhood friend’s mom, who had been our neighbor in that era, and asked if she had the recipe. I remembered that she made it too, but hers was all wheat and crunchier. Anyway, she did have it. It was called “Jane’s hardly ever fails bread”. I got the recipe END_OF_DOCUMENT_TOKEN_TO_BE_REPLACED