From time to time older women will tell me that they are seldom invited out, but that they, meanwhile, are having people over all the time. They wonder what gives. Now this doesn’t mean that they are looking for a payback. They simply wonder if they are doing something wrong. I tell them that this comes with the territory. To whom much is given much is required. They may have bigger homes and resources than many of the young families they are having over.  Some are called to extend hospitality more than others. So I remind them to be faithful and not worry about it. In fact, if everyone was inviting them over, they might feel swamped!

My opinion on this is that older women can be very intimidating to younger women.  This came as a shock to me when I first realized it. Me? Intimidating? How could that be? It’s just me, after all!

When Doug and I were first married, he was in college and then in grad school. He was fond of inviting his professors to dinner, and I tell you, I was very intimidated. I was not a great cook. In fact, I think when we got married, I knew how to make soup (just put a bunch of vegetables in a pot and see what happens), and of course I could make a grilled cheese sandwich or fry a hamburger patty. I learned to make macaroni and cheese from my  mother-in-law, and I gradually picked up the knack of the END_OF_DOCUMENT_TOKEN_TO_BE_REPLACED 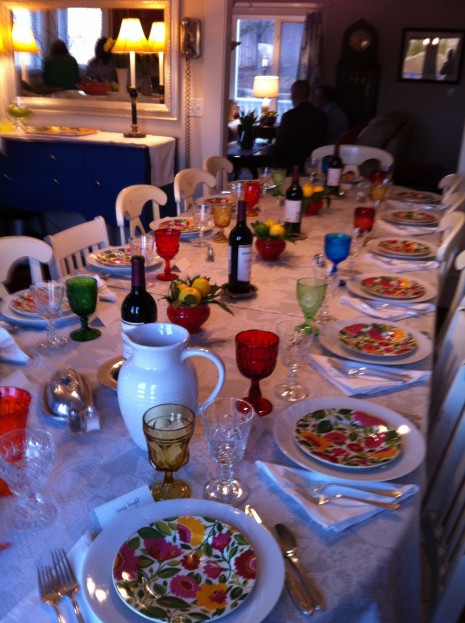 This is a summary of a little talk I have given a few times here and there, most often to high-school students in preparation for the Protocol event at Logos School, or to college students at New St. Andrews College where the students are frequent guests in the homes of their instructors or families in the church community.

What is a guest? Simply put, it is someone who is on the receiving end of hospitality. Everyone wants to be a guest; we want to be included, not left out. The Puritan preacher Matthew Henry said, “Man was intended to be a sociable creature, and a Christian, much more so.” God created us to live in community, so we will have many opportunities to be guests as well as hosts. Each role has its duties and responsibilities, but right now we’re going to discuss the duties of the guest.

We might not realize how often we really are guests. We are a guest (in a sense) when we are in any place where someone else has prepared for us. We are a guest in a museum, a hotel, a restaurant, a store, in the classroom, at church, and even when we are riding in someone’s car. In all these settings we should have a common demeanor of humility and appreciation, making our hosts’ jobs more pleasant. All these duties have one thing in common: the guest is being considerate of the host. It’s a way of loving our neighbor.

For example, in a store we don’t leave a mess behind. If we knock a sweater off the rack, we pick it up. We don’t leave our empty Starbucks cup on the shelf next to the canned beans. At school we give the instructor our full attention, and we don’t leave trash under our desk for someone else to deal with. At a hospital, we keep our visit short (unless it is a relative we are visiting), and we speak quietly. We don’t ask personal questions or tell gruesome stories. But these are not the primary settings I want us to consider today, but END_OF_DOCUMENT_TOKEN_TO_BE_REPLACED

Well, I see that we share many things in common when it comes to hospitality blunders. I am enjoying all your stories. Funny how the most trying moments make the best stories after the fact.

Once we had a family coming through town who needed a place to hook up their camper for a couple of days. We had never met them, but we arranged for them to park in a friend’s driveway. When they arrived with their four boys, we told them that we had arranged hospitality for them, but they insisted on staying with us. We had a very small house (around 900 square feet) and my parents were visiting. It was one of those moments, and what could we do but say, “Oh, sure.”

Our one tiny bathroom then became shower central while the family took turns getting  showered (they had been on the road a while), and I remember going into the kitchen to pray for grace once I realized I was fixing for dinner for the gang. One of my girls came in from the back yard to tell me that the boys were being pretty rough with her tricycle. I remember explaining to her that they just might be angels, so we had better be nice, but  I could tell that she didn’t buy it.

After doing a quick inventory in the kitchen, I proceeded to make the old stand-by, a very large vat of mac and cheese. And they were the kind of guests who were very grateful and easy to please. (Not like the visitor who once told my mother-in-law that he would rather have spaghetti when she had served him a pork chop. Believe it or not, she fixed him spaghetti, and my children still refer to him as the paragon of rude behavior!)

But back to my story. Despite the rough start, it turned out rather well. The lady had been very lonely for some female company and my mom, bless her, sat down and had a cup of tea with her while I fussed around in the kitchen. Meanwhile, my dad visited with the husband, and the boys stayed occupied in the back yard. We all felt like God had enabled us to provide for these needy people, despite the fact that we were totally unprepared. And we got the surprise blessing.

I don’t know about you, but I have pulled some real hostess bloopers over the years. (And, yes, I’ve had a few guests pull them as well, which makes us even.)  I am pretty certain that I don’t know about all my bloopers, because I’m always busy at the moment, and I fail to see what I failed to do.

One of my common blunders that I have tried to overcome is this one: I sweetly offer a guest something to drink, and then I forget all about it and never come through with the goods. Said guest is too polite to mention it, and unless it occurs to me later, they usually go drink-less. Just yesterday, in fact, a friend stopped by and I made a pot of coffee. But we got talking, and it wasn’t until she left that I realized the coffee never got poured! Nice! And to top it off, I had made scones which I never served her with the coffee. Now that’s a record for me. When I called her later to say oops, she had a jolly laugh and confessed that she didn’t even notice! Now that’s a thoughtful guest. And she pointed out that I had two granddaughters on site who were modeling hats for us while we visited. (They were waiting for a tea party with scones which I did not forget.) So she said I was justifiably distracted.

Sometimes I find one of the side dishes in the fridge after the meal.  I’ve left things in the oven too, and the results are not as kind. I’ve made a topping or garnish that never made it onto the dish, and it isn’t until cleanup when I see the little dish of chopped fresh parsley sitting ready for action.

Guest bloopers seem fewer than my hostess bloopers. The worst was a no-show when I had dinner all ready and hot. That was a let down. And a couple of times we have had guests who simply would not speak. I felt so sorry for them, and did all I could to make them feel at ease, but I finally had to resign myself to silent guests. That’s when I was grateful for chatty children.

The lovely thing about hospitality is that it is not a show. It is real life. And in real life things happen. Like when I pulled a lovely big pan full of lasagna out of the oven,  the dish split, and half the lasagna went with it to the floor. Oops.

When we come to discuss particular points of social etiquette, it’s important to look at the big, bigger, and biggest picture.  Most of the rules regarding manners were established hundreds of years ago and have been honored and acknowledged for generations by our own ancestors and all their aunts and uncles. I dare say that your great-grandma was telling your grandfather at the table not to chew with his mouth open, to put his napkin on his lap, and not to talk with his mouth full. Let’s hear it for good manners! But manners were made for man, not man for the manners.

A bunch of these older traditions and social expectations have morphed and evolved into their present forms, and for good reason. I can remember reading through a old book on etiquette and breathing a sigh of relief that we have moved on from some of those out-dated customs. But we still have many cultural expectations, especially regarding weddings and showers, funerals END_OF_DOCUMENT_TOKEN_TO_BE_REPLACED

Sandi Boswell has another good piece (it is in response to a comment, so look below her article) on the why’s and why not’s of shower giving. The thing I always appreciate about Sandi is her gracious way of tackling thorny issues. She knows there is always a deeper right than being right. (There is a rude way of correcting someone’s rudeness.) So if our friends and relatives are falling short on some of the rules of etiquette, whether it is on this topic or on others, we are not to look down our noses at them, but attribute the best of motives.  Love covers it. And love is the thing we are striving for in all our applications of etiquette.