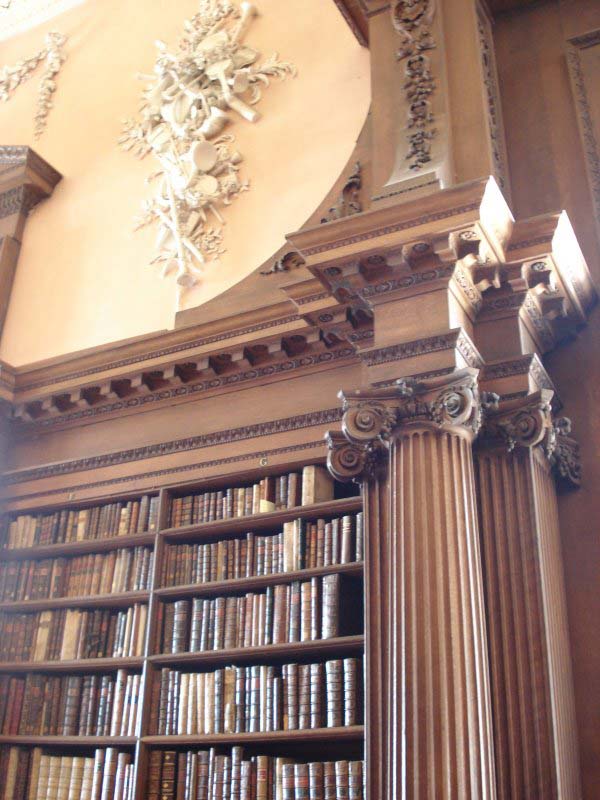 Howdy â€“ do! I havenâ€™t posted anything in absolute ages â€“ and most of my excuses had to do with being busy and crazy and heaps of laundry and everything else . . . but today those excuses donâ€™t apply. As a matter of fact, Iâ€™m actually in danger of starting to get a touch bored. Today my cousin Brooke is babysitting the kids and Iâ€™ve come into town with Ben. The Christ Church library has asked him to write something about their Hebrew collection for a publication of theirs, so he had to come down and look through the collection of 16th century Hebrew manuscripts. I came along for the ride and also for the coffee and croissant that weâ€™ll grab together afterwards.

So here I sit, in the upper gallery of the Christ Church library. This is where they keep the rare manuscripts, and you can only really come in by appointment. The lady who oversees this library told us once that they have another huge collection somewhere else with 10,000 volumes that is completely un-cataloged and they have no idea whatâ€™s in it. She pulls things out for displays occasionally, and regularly finds things like first edition Copernicus . . . you know, trifling things like that.

Ben is delving through their Hebrew manuscript collection as we speak â€“ balancing on a ladder at the upper shelves, his head up by the Corinthian capitol, and pulling out things and saying excitedly, â€œHey Baby! This is a Hebrew text printed in 1494! This has to be one of the earliest Hebrew books printed!â€ or â€œWow! This is actually a 1569 edition of Tremelliusâ€™ Chaldean and Syriac Grammar!â€ Itâ€™s exciting yes, but for me itâ€™s more because itâ€™s so cool that Ben gets to look at these things â€“ but I canâ€™t actually get myself worked up over the nuances of the thing. To me itâ€™s just neat that these are really old books â€“ and it has a bit of an Indiana Jones feel about it actually. As Ben pulls these things off the shelf old letters flutter out, all in Latin or Hebrew, or even old maps . . . I keep thinking that of course theyâ€™ve got to lead to treasure hidden somewhere. For Ben itâ€™s a completely different thrill â€“ this actually IS the treasure.

This massive wall of books is incredibly beautiful. Huge, gorgeously carved shelves, enormous molding, beautiful columns, and walls and walls of old leather covers. Weâ€™re the only 2 people in the library. Even the librarians aren’t here – they’re all off on their lunch break or something. Ben has found a handwritten manuscript that appears to be some 16th century version of a Hebrew dictionary and is looking through it, and Iâ€™m freezing to death and amusing myself by looking at the incredibly ornate and gilded plaster ceiling about 30 feet above me â€“ more baroque than anything has a right to be. I found the warmest place to sit â€“ near a massive window â€“ itâ€™s got to be at least 20 feet tall â€“ and itâ€™s looking out over the spires of Oxford. The heat vent is right under it, so Iâ€™m huddled in my coat as close to it as I can get. But in order to use my computer right here I had to plug it in by crawling along under a massive table which is holding heaps of incredibly old manuscripts that are too delicate to be touched and one enormous early Medieval Torah Scroll, complete with a tapestry bag to keep it in. As a matter of fact, the library asked Ben to come in a month or so ago and look at the scroll and give his opinion of it â€“ they had found it in the library somewhere and had no idea what it even was. They wanted to hear Benâ€™s opinion of itâ€“ and he told me before he left to go look at it that he was quite interested himself to hear what he would say about it! He thought it would be something along the lines of, â€œYes, this is Hebrew. And I think you should read it right to left.â€ None of the librarians read Hebrew, and apparently heâ€™s the only guy that has used the Hebrew collection here in years â€“ so they figured he was the one to call, which is awfully fun. As a matter of fact, after looking at it with a friend of his and unrolling the entire thing, (no mean feat since this scroll is absolutely enormous) they were able to tell the library that this was a Torah scroll – Genesis through Deuteronomy – and not a single other mark was on it. Not the scribe’s name, no commentary, nothing but the text. So now the library will get an expert to come try and date the thing . . . at the moment it looks like they’re guessing 14th century.

Well, Ben has finished the last shelf and is climbing down the ladder, so weâ€™re off to find a cup of coffee and warm up!