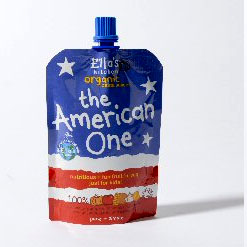 This is just a little something that I need some input on. What we have here is an item I run across frequently at the grocery store. It always catches my eye, and then I always pick it up and have a little ponder about it. I’m still stumped.

It’s a squeezy packet that is located on the shelf with the pasta sauces. It sits all alone there, amidst the bottles and jars of bolognese and puttanesca. There are no other squeezy packets in sight. Just this little loner American One.

The thing that’s always tough for me with this specimen is not just the fact that it’s being chalked up to my country. It’s the ingredients list. You can’t read it in the picture, so allow me to report on what is in this little squeezy packet:

Apparently what you’re supposed to do with this is boil up some noodles or rice or bake a potato. Slap it into a bowl, and then hand both the bowl and the squeezy packet to your your child. They then have the fun of unscrewing the cap and squirting a bunch of squished up pumpkin and corn all over their noodles or rice or potato. (The heat of the food warms the sauce.) This is considered to be the American approach. There’s even a little cutesie testimonial on the back in a childish font about Auntie Shari who makes blueberry pancakes. The pancake allusion is, I think, intended to convince us that they are conversant with American cuisine in all its forms and know all about what Americans eat in a whole variety of situations . . . not just what they put on their pasta (and potatoes and rice). They’re experts as a matter of fact – probably because of their link with Auntie Shari who tells them all about it.

If you delve into the question on their website, they make some vague remarks about Thanksgiving. I think what happened here is that they realized that at Thanksgiving Americans eat pumpkin, and Americans eat corn. Presumably Americans also eat tomatoes and oranges and lemons and garlic . . . . possibly at Thanksgiving, but if not then, they likely do at other times of the year. So they whizzed it all up, shoved it into a squeezy packet, and now try to hornswaggle the trusting British public into squirting it onto their children’s baked potatoes as an exercise in foreign cuisine and cultural education.