Well this blog post is wickedly out of date. It’s something I meant to put up weeks and weeks ago, but what with one thing and another I’ve just not gotten around to it. And then, rummaging through my clogged up camera, I happened across these photos and figured that I might as well shove it up.

Several weeks ago we made the drive down to Boise. For those of you not familiar with our dear old state, the road from Moscow to Boise is 300 miles long, and it’s the only north / south highway that there is. In the course of that 300 miles, you go through two actual towns and a handful of seriously small little units. If we had a classification system like England this might be simpler. In England you are a village unless and until you have a cattle market . . . at which point you obtain to the official status of town. And you’re stuck indefinitely as a town until you get yourself a cathedral. Quite basic, and easy to keep a hang of really. Everyone knows if they live in a village or a town – and cities are easy enough to spot since they get their own bishop. Anyway, going by that unit of measurement there would be no cities whatsoever on Highway 95 from Moscow to Boise,Â  and there would really be only two (maybe three) towns. The villages would rack up to about five I think.

Anyway – that is neither here nor there. I merely bring it up as a means of illustrating the fact that when you drive to Boise, you’re zooming along through the wilderness. There’s no cell phone coverage to speak of for the entire way, saving the brief moments in those two towns. 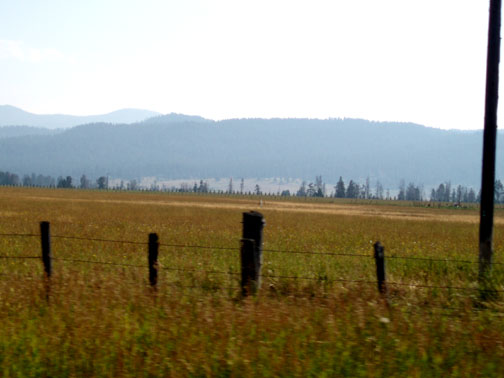 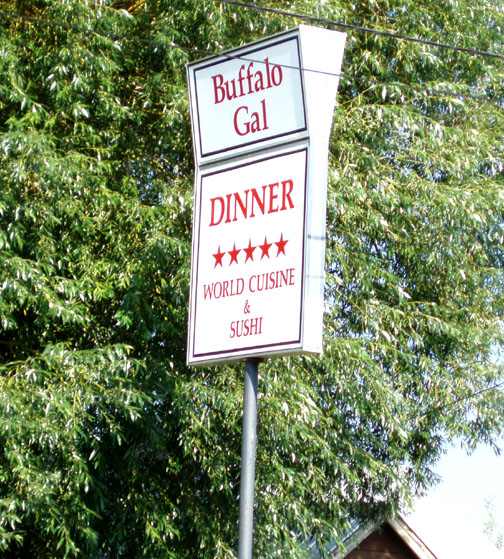 Yes. The Buffalo Gal. So far that would seem to be relatively un-astonishing. A buffalo gal truck stop near one of the villages is just what one would take right in stride. The thing that jumped out at me about it this time was first of all the question of whether or not the Buffalo Gal knew how to spell “Diner” or whether she actually meant dinner. “Dinner” of course would be an appropriate thing to put on the sign – it would save people the hassle of stopping for lunch, only to find out that the restaurant was closed. Maybe she meant Dinner in the truest sense of the word. But I can’t help wondering if perhaps she was endeavoring to communicate that this was in fact a Diner. But either way, this dinner-serving-diner offers not only World Cuisine, but also Sushi. What more could you ask? A lovely view . . . and some sushi . . . with World Cuisine thrown in! Served up by a Buffalo Gal.

One of these times we’ll have to stop in and find out what it’s like in there. I’m awfully curious. And there’s another one on the edge of the Hoo-Doo mountains which is called (applicably) “The Hoo Doo Cafe” and I’ve always wanted to check that one out as well. And of course there’s “Eddie’s Chinese” in Colfax. Now that I think about it, there’s a whole host of restaurants in our vicinity that are just begging to be tried!

17 thoughts on “Another thing I love about Idaho”