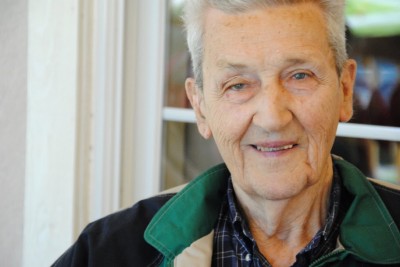 My husband’s Grandpa Jim Wiersma went to be with the Lord today, in the early morning. All nine of his children were able to be with him at the end, as well as several of his many grandchildren. His sweet wife of 68 years was there to hold his hand, and say goodbye.

Grandpa and Grandma Wiersma are a couple who understand homecomings. Their love for each other, and trust in God has withstood far worse separation, rejoiced over far smaller homecomings.

During the war, Grandpa Wiersma spent two years in prison camp in Austria. Grandma was at home in South Holland with their son. During that time he wrote to her, on stationary emblazoned with a swastika, of the Sovereignty of God, of hope, and of faith. When they were liberated by the Russians, he was part of march across Austria – an experience that left him with a belief in cleaning your plate.

That separation that could have been the end, proved to be just a beginning. Eight more children were born after the war, grandchildren (in abundance)  followed. Heartaches, sorrows, and troubles were all born by them with a much deeper understanding than many of us have. They were very comfortable in the hand of God. In their living room was a picture, taken before many of the great-grandchildren were born, of the whole family. I remember him looking at it and saying “Isn’t that amazing? Who knows what God is going to do with that?”  He was completely confident that God would do more than we could ask or think of.

This final homecoming for Grandpa Jim is sweet. His wife Kay knows beyond a shadow of a doubt that they will meet again. And she knows that when they do, real life will just be beginning.

Thank you Grandpa Jim, for your testimony, for the family you built. Thank you for the example of steadfastness, and faith in God’s plans. You have left us, and our children, with a mighty inheritance in the Lord. We will look forward to meeting you again.

11 thoughts on “A Sweet Homecoming”