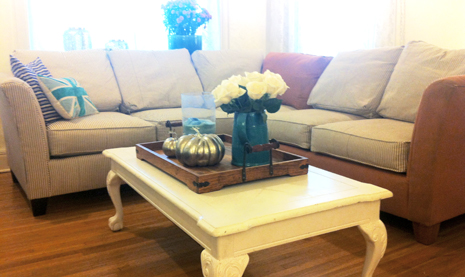 Just thought you should see my piebald sofa update. As you can see, I got sick of sewing cusions. There’s that lonely one in the corner still left – but I was bored with cushions and tired of zippers. I’ve gotten one half of the uphostery done . . . unfortunately it was the small half. But on the other hand, it’s farther along than the last time I showed you my sofa situation. Once it’s finished, I may decide it’s worthy of a photo taken with something other than my phone. I should also add that I have not been working on this since we last spoke. I’ve taken entire weeks off and neglected it badly. During one of those weeks our entire family got the flu – and, not that you wanted to know this, Ben and I both got it at the exact same time which is something we’ve never done before. Thankfully none of the kids were throwing up right then – they would have been entirely on their own, because both Ben and I would have been completely unable to help. They timed their sicknesses very thoughtfully – they landed on either side of us. Anyhow, what I’m saying is that life is real and life is earnest – and in between times I try to staple some more ticking to my sofa.