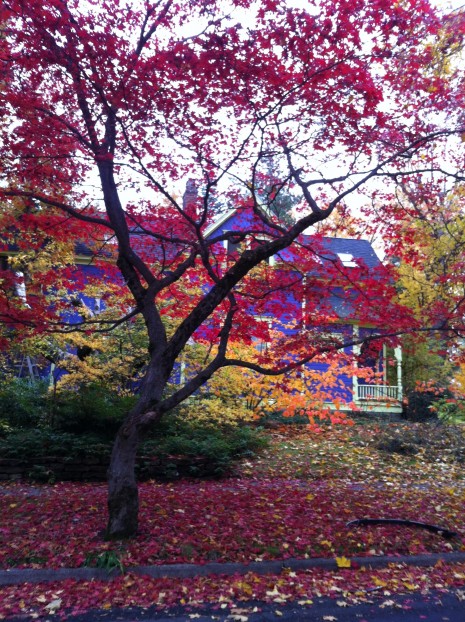 God is our Maker and He makes stuff, lots of stuff, for us to play in. He makes the wind and we play in it. He makes the leaves and we play in them. He astonishes us year after year with their impossible colors and momentary beauty. Each one designed, each one made from nothing. Why does He do this? For pleasure. For raking. For picture taking. For jumping.

One gorgeous fall when Nate was a senior in high school, he and his friend Travis (his future best man) were raking leaves in the front yard, making them into an outrageously enormous pile. They were probably supposed to be putting them in the big black bags. I can’t remember. But the pile they made must have been at least ten feet tall and just as wide. Once assembled,  they would back up across the yard, get a running start, and leap wildly into the air, landing smack in the middle of it. Then they would pick themselves up, rake it all back into a pile, and do it again. And again. Of course this drew Bekah and Rachel outside to join in.

It was just getting dark, close to the dinner hour. Doug pulled his old beater orange truck up to the curb, walked up the sidewalk, and took it all in. The leaves had just been re-assembled into their enormous pile and were ready for action. Without a moment’s hesitation, he set down his briefcase, put his head down, and ran full speed into it, doing a front flip and disappearing entirely from sight. I’ll never forget it. I’ve seen him deep in plenty of things, but only once in a leaf pile.