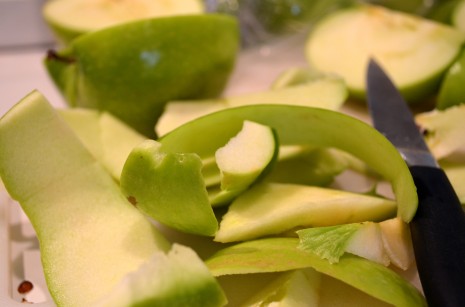 I just have to get a little something off of my chest before I commence with this recipe. I went to a clearance sale the other day at a fabric store, and while I was at the counter with my epic 80’s fabric, a woman told me something. She said, “I was looking on Pinterest the other day, and I saw the most amazing thing!” Now, she was excited about this and wanted to let me in on it. She went on, ” You smash up two bananas, stir in some instant oatmeal, and that’s it!”

After a moment’s pause I said, “What is it?” and she gleefully said, “Cookies!”

Now if it pleases you to smash up bananas to eat with instant oatmeal in the privacy of your own home, smash away. Gobble it up. I don’t care. But let’s just realize that these are not cookies. We have access to a very rich culinary heritage. Let’s not forget what a real cookie is!

This recipe is for Apple Strudel. It is brilliant and also dear to me. When Luke and I were first married, we went back to Chicago at Christmas. His mom hauled out this recipe and told me it was time to learn. We stayed up late in their small kitchen with a lot of people talking and helping and milling about. When it finally got out of the oven at about one in the morning, the kitchen was still full of a lot of eager eaters. We cut into it and spat it out right away. Apparently in all the people milling about, Luke’s sister had been cleaning up and dumped a bowl of table salt into the top of the sugar canister. So we had stayed up late into the night making a salted apple roll. But I learned how to do it, even if not what it is supposed to taste like then, and I came home with my photocopy straight out of the Slovenian Church cookbook. The ladies in that book looked like they knew their way around a strudel, as well as everything else.

Although that is a great memory for me, it isn’t the only reason I love this recipe. My mother-in-law is Dutch 100%. She got this cookbook and taught herself to make strudel so that she could make it for her father-in-law. He passed away quite young, but not before she had made him strudel. So here I am, also not Slovenian, although I have the name now, making strudel still. Generally we all try to use sugar. Also, I took all these pictures before daylight savings on a rainy winter day. Just the kind of weather that is bad for food photography but wonderful for strudel. You’ll just have to bear with it!

It isn’t a hard thing to make at all. It is a tiny bit of a production, but not much. You make the dough and let it sit at least an hour and up to five. In the meantime, you can peel the apples, toast the breadcrumbs, melt the butter, and mix the cinnamon and sugar. Once these things are all ready, it is just the fun part left. 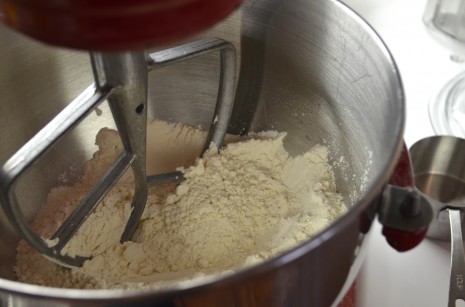 Mix 3 T. oil, 1 large egg, and 1 t. salt in a small bowl. Put 3 cups all purpose flour into the bowl of your Kitchen Aid. (I am confident that if Millie Paisoli and Frances Zibert had a Kitchen Aid, they would have used it. As it was, they recommend beating vigorously with a wooden spoon for 5-7 minutes, followed by kneading for 15. See what I mean?)

With the mixer running, pour in the mixture, and then 1 cup lukewarm water. Let it mix. I leave it in the Kitchen Aid for several minutes – because all that kneading brings out the gluten which this recipe depends on. The dough should be smooth and soft – not too sticky to handle, but not dry. Put a little oil in a bowl, knead the dough by hand for just a minute and to shape it into a nice ball, then press it into the oil and flip. Cover with some plastic wrap, and let it rest in a warm place for at least an hour, and up to five.

In the meantime, peel 3# baking apples. Granny Smith are a reliable choice here, but Jonathans, Jonagolds, Winesap, or any apple that bakes well will work. Mix 1 cup of sugar with one teaspoon of cinnamon in a small bowl and set aside. In a saucepan, brown a cup of fine bread crumbs in 3/4 c. butter. Set aside. Melt another 3/4 c. butter and set aside.

Preheat the oven to 450 degrees. Now you put a clean sheet or tablecloth on the table and sprinkle flour on it. Rub it in  little. Put your dough in the center, and roll out to a circle about 18″ across. Pour some of the warm melted butter on it, and rub it in with your palms. Now, with your palms, reach under the dough and begin stretching. You want to work from the inside out, walking around the table as you go. Gently stretch and move along. You want the whole thing to cover an area about 3ft x 4ft. Just work quickly without worrying about it. I believe strudel is like pie, in that it can channel anxiety. This is not rocket science. Try to be like the women in the Old Country who just made it without comparing it to the perfect strudel of all time which they have seen on Pinterest. As you stretch, you will be making this dough stinking thin. You should be able to read a newspaper through it when you are done. 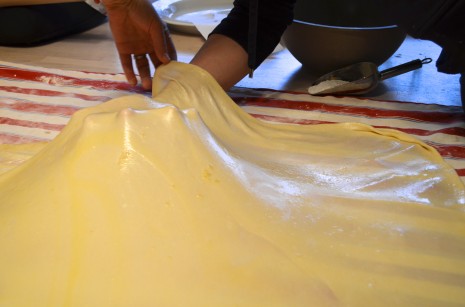 When it gets to be huge and fairly rectangular, you will want to trim the edges. I use a pizza wheel – just to cut the very edge, which remains thick, off. Now on to assembly. Get your buttered toasted breadcrumbs and sprinkle them all over the dough, except the bottom 4″ (lengthwise). Spread slices of apples on the lower half of dough (also leaving the bottom 4″). Sprinkle the cinnamon sugar over all the apples. Now fold that bottom 4″ up over the apples. 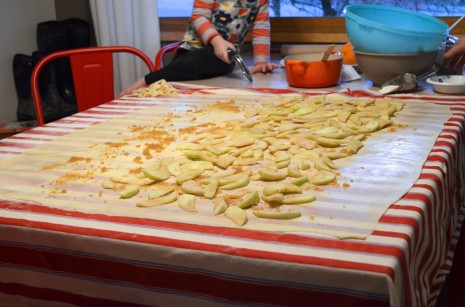 Now pick up the edge of the tablecloth and carefully begin rolling. 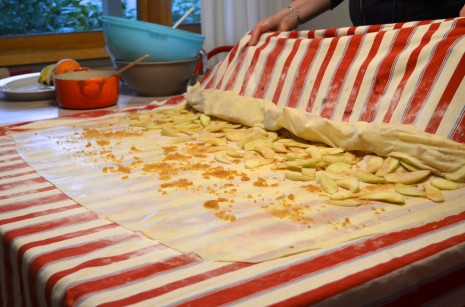 When you get to the end of the apples, stop. There is still butter! Drizzle all but a couple tablespoons on the remaining bit of pastry. Then roll it all the way up. It is possible that the side edges are supposed to be turned in too. I don’t, and the ends are delicious so I’m not worried about it, but if you like to keep things tidy, you might try that. When it is all rolled up, transfer it to a greased jelly roll pan. As you can see, you will need to shape it in an S to fit it on. 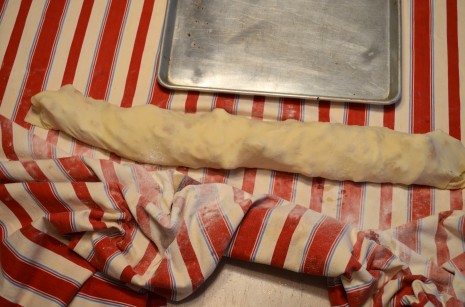 Use the last little bit of butter to brush the outside, and then pop it in the oven. Bake at 450 degrees for 20 minutes, then 375 degrees for 20 to 25 more. Cover with a clean tea towel for 10 minutes when it gets out of the oven; then cut in half and transfer with a couple of spatulas to a platter. Dust with confectioners sugar. Yum. This serves quite a few people. I make two when I do it for Sabbath dinner.  A lot of people have seconds, some have thirds, and we have leftovers. So I’d say you can safely get 20 slices out of one, and, served with some ice cream, no one has anything to complain about. 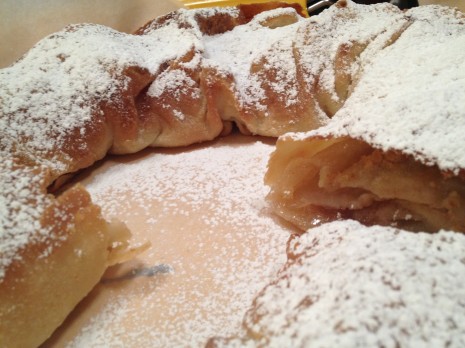