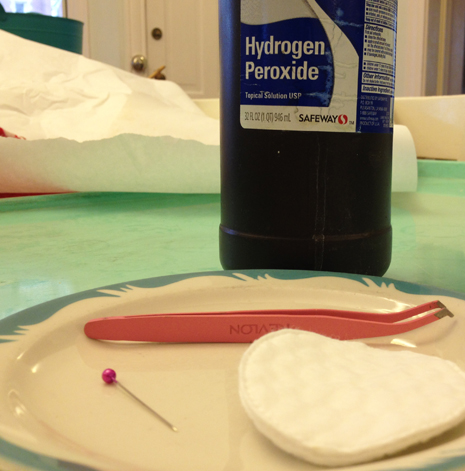 Don’t worry. I’m coming to a point. As dramatic as this all is, and as much as this is a worthy tale in its own right, I’m working up to a metaphor so bear with.

Anyway, the shard of glass did not, in fact, work itself out. If anything it knuckled down and burrowed further in. It started to hurt more. Finally it got to the point where I had to actually take notice of the durn thing. Now it didn’t just hurt when I stepped on it funny – basically every step turned out to be funny. I ended up putting all my weight on a different part of my foot when I walked and then that got weird and sore. I was out Christmas shopping the other day and stepped on it wrong – and my flinch then caused a charlie-horse in my calf. Yeah. That was good. I made a mental note to look at it when I got home. But I didn’t, because I was busy and had more important things to do than peel off my sock and look at the bottom of my foot.

Now of course it’s all nasty and swollen and painful and I don’t want to touch it at all. I want Ben to get it out for me, and I also don’t want him to come anywhere near it. Anyone who approaches me with tweezers should prepare themselves for a fight. But on the other hand, deciding to just not walk anymore isn’t an option. The thing needs to be faced. Probably with a needle to dig it out. And it’s going to hurt and be hideous. I started the whole project last night and got as far as soaking my foot in hot water and then dinner had to be gotten out of the oven so the project was abandoned. But as I was sitting there with one leg of my jeans rolled up and thinking, “Daggone. This hurts like sin,” I realized how much it does, in fact, hurt like sin.

Aha! She’s reached the moral of her boring story!

I was thinking how much a little sin, left unconfessed, behaves exactly like a little shard of glass in your foot. Have you ever had this happen? You shared something about your husband with a friend . . . and as soon as it was out of your mouth you realized you shouldn’t have said it. You got a little gossipy about someone during your book group. You told a quick lie to spare yourself embarrassment about something. You said something cutting to one of your children. And it was so small and stupid that you don’t want to call your friend back – so you decide you’ll just ignore it and maybe it will go away. But somehow it just seems to get worse, the memory gets more tender, you start doing strange mental gymnastics to avoid thinking about it.

Once, sometime in my youth, I told my mom a lie. It was a stupid lie, and it was about something trivial that I don’t even remember. I think I was feeling embarrassed or worried about something so I quickly popped out an excuse that wasn’t quite true. Or something. The funny thing is, I don’t remember what the lie was but I do remember the guilt. I remember telling and re-telling that story to myself, trying to cast it in a way where what I said to my mom wasn’t actually a lie. I replayed the conversation over and over in my head, trying to massage it into a case of technical truth telling. It didn’t work.

But I didn’t want to confess it – because we all know how that takes the original embarrassment and increases it exponentially. It’s the worst. No one likes having to do that.

So I tried to forget it. Didn’t work. Tried confessing it to God. Didn’t work. I prayed and prayed about it every night as I was lying in bed, but it brought absolutely no peace. I still felt wretched. I kept feeling like God really should forgive me and take away the guilt . . . but deep down, I knew that unless I was ready to go confess it to Mom I wasn’t really repentant. And I knew that God knew that too. And that’s why confessing it to Him didn’t work. He doesn’t accept hypocritical prayers.

After probably two weeks of agony, I realized that no matter how wretched it was, I had to go and confess that stupid lie to my mom. And wow the relief! Immediately everything was better. I was back in the joy of the Lord – just like I’ll be able to walk normally again without flinching after I dig this stupid glass out of my foot.

But if you think about it, how much easier would it have been if I had just sat down and fished out that little shard the minute I noticed it? I wouldn’t have even thought about it again. How much easier would it have been if I had confessed that lie to my mom as soon as it had come out of my mouth? If I had done that I guarantee that I wouldn’t have any memory of it now. The reason I remember it is because I remember the agony of not having confessed. It’s just a reminder to keep short accounts. To confess the gossip to your friend before your conscience gets all infected and nasty and tender. To call your son back into the room immediately and tell him you’re sorry for snapping at him. Confessing it immediately spares you from the humiliation of the long-overdue apology.

The other benefit to forcing yourself to make the apology . . . it certainly is a deterrent. Nothing can cure your desire to gossip more swiftly and effectively than calling all the ladies in your book group and asking them to forgive you for that snarky thing you said.

Anyway there you have it. Now I’m going to go and disinfect a pin.

10 thoughts on “Some Moralizing”