I feel that I should share with you all a ripe little episode from my weekend. Just a gem of a situation.

It all started because we have my cousin Brooke living with us. She’s been just a fabulous help with things, and so we wanted to give her a gift before she heads home for Christmas.

There is a small village a few miles outside of Oxford called Great Milton. The manor house in this village was purchased by the French chef Raymond Blanc, and turned into a luxury hotel and 2 Michelin starred restaurant called Le Manoir aux Quat’ Saisons. So far so good. But also so far, irrelevant, because I am not in the market for either luxury hotels, or Michelin starred restaurants. It’s fun to know that they’re out there, and that’s as far as it goes. But then I discovered that Le Manoir offers day long cookery classes, and I thought what a fantastically fun gift that would make. So, I signed Brooke up for the Christmas Dinner Party class. It sounded completely spectacular. The class teaches how to serve a 3 course Christmas dinner party, and each student comes home with a chef’s jacket, all the recipes, and a tart that they made. Pretty fun, eh? She made guinea fowl confit, wild mushroom fricasee, reduction sauces, cream cake, and a whole slug of other things which I’ve forgotten. And they had morning tea served to them in the kitchen on the house china, they ate the guinea fowl confit etc. for lunch, and generally whooped it up.

So yes. I signed her up. She was supposed to arrive at the restaurant at 8:45 in the morning . . . so I was going to drive her out and drop her off. Ben warned me before I left that one of the tires was a bit flat and that I should fill it up at the service station right by the turn off to the restaurant. After protesting that I couldn’t fill up a tire to save my soul, and having him overrule my objections and explain how to do it, I sallied forth with Brooke to drop her off. When we passed the service station I figured that I’d go ahead and do it on my way home so that I didn’t make Brooke late for her class.

And that’s what I did. I passed by the service station and regarded it not. I found the village, and dropped her off. Pause here for a moment to show some pictures of the place. 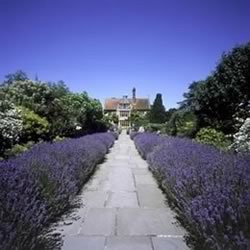 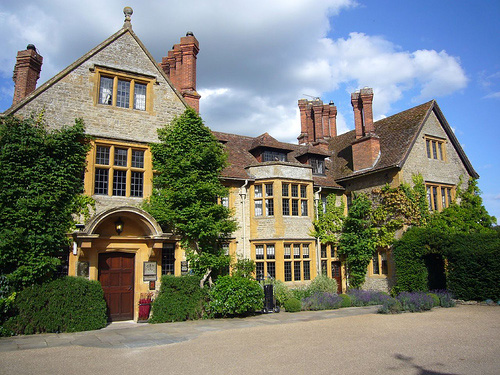 Right. That’s where we leave Brooke . . . heading in to don her chef’s jacket and eat confit. Meanwhile, I, dressed very smartly in jeans, hoodie sweatshirt, parka, no makeup and my hair not fixed, (let this be a lesson to you . . . consider this a cautionary tale) got back into my minivan (or “people mover” as they very unflatteringly call it here) and attempted to drive away.

Attempted is the key word. I pulled out of the parking space and headed for the exit – but there was something very definitely wrong with the car . . . bad enough that even I could tell that things weren’t quite fine. I pulled to the side of the main drive and got out to look. Yes. Tire so flat it was practically flapping in the wind. And I had no cell phone, having very handily left it at home with Ben. Obviously one of my really prepared mornings.

As I was standing there helplessly wondering what I should do about this situation, a maintenance man walked past. I asked him if there was anyplace nearer than the Oxford services where I could put air in my tire. He took one look at the thing and said there was no way I could drive that anywhere . . . not even to a parking place. So there was nothing for it but for me to gather up my courage and head into the manor and beg to use a phone.

Trying to not to think about it, I went into reception. A gorgeous little room with antique furniture, a big fire blazing, and about 3 men in suits. I explained my plight and asked if I might borrow a phone. And so I had to stand there at the counter (did I mention the just-rolled-out-of-bed approach to my outfit and hair?) while incredibly posh people strolled through and checked in and out, and all listened in on my conversation with Ben. I was trying to sort of by osmosis get him to realize that I couldn’t stand at the counter and continue making phone calls . . . as in, couldn’t call a tow truck or insurance from there. I can only take so much humiliation when I’ve only had one cup of coffee. But it’s not an easy thing to say out loud when everyone is listening you know? You can’t quite just say, “Aarhgh! I’m standing here with coffee breath and my hair in a big floofy loop on the top of my head and a parka and this is a very small room and they’re all really posh and they’re all wearing suits and I’m using their phone and it’s really awkward and I REALLY don’t want to have to borrow a phone book and start calling tow trucks!!!” You see what I mean? You have to just hope that that’s all communicated by the tone of your voice to your husband who knows you, but not to anyone else in the room. Very awkward all round.

Luckily, he picked up on this fact. (Sign of a good marriage don’t you think?!) He said that he would call a tow truck (a tow truck!!) and have it come out to change the tire for me but it might be a while before they could get there and he wouldn’t really be able to call me back to let me know when it would arrive. I said great – and was ready to head out. But then one of the men in suits said he’d been hearing my conversation and asked if I would like him to find someone to change the tire for me. I very gratefully said yes, and he headed out with me to find someone. He was incredibly polite, and called me madam, and was just very friendly. But in that sort of a way that means you have absolutely no idea what he’s actually thinking!

We arrived at the people mover – lopping out into the main drive – and the same maintenance man came by. My friend in the suit asked him if he’d be willing to change a tire . . . and he said no. Too busy. So that was that – and the man in the suit started probing around to see if he could help me. But it instantly became clear that that wasn’t going to happen either. I mean, the spare was underneath the car – and he was in a suit. Then I happily remembered that Brooke had a cell phone . . . and asked the man if there was any way I could interupt the class to borrow it. (Yes. I was completely dead to shame by this point.) So he took me over to the kitchen and we went in the back . . . while all the fish was being delivered . . . and he pointed out to me in a very friendly way all of the different varieties that were being brought in. At any given moment at Le Manoir, there are 22 chefs in the kitchen. I’m pretty sure that I went past most of them.

We arrived at the class and I had to call Brooke out (wearing her chef’s jacket and apron) and ask to borrow her phone. So she had to traipse back in, get her phone, and bring it back out to me. At which point, I was ready to disappear from the premises forever . . . but my friend in the suit said that he absolutely insisted on bringing me into the lounge to wait until the truck arrived. He said that it would be in his mind all morning to know that I was out in the cold . . . and he really must insist. This was very kind – but still. My hair was still in the floofy loop on the top of my head. But I meekly followed him back into the manor and through the halls into the lounge. He set me up by a fire on a big window seat and asked if he could bring me any coffee. I declined – I felt like what I needed most in the world was to fade into the background!

But from my little cozy spot on the window seat I was able to call Ben back and find out about the tow truck situation. He had it all booked, and they were on their way. So at that point I thanked them all for their help and went out and sat in the car to wait! Eventually a van arrived (thank heavens it wasn’t a tow truck) and a goofy little man changed my tire for me. Life was good – and I could move off of the main drive of Le Manoir aux Quat’ Saisons! And definitely not a moment too soon.