Yes, this is outdated and essentially old news. But then again, I’ve only just peeled myself up off the floor after Easter and so I could hardly have been expected to mention it earlier!

Here’s what happened. In the comment section from last week when everyone was giving their ideas for Easter menus, I loved the suggestion (from Cindy I believe) to make Resurrection Rolls. I mean, how festive is that? (I should mention at this point that I also made Cheryl’s deviled egg chicks . . . because how could you look at that picture and then NOT make them? Mine looked like googly-eyed owls wearing flight goggles, but still quite a striking presence on the table. They lent a high tone to the whole proceeding.)

Anyway, I thought I should definitely make the Resurrection Rolls for Easter breakfast. But since I didn’t get around to that until about 10:30 pm on Saturday night, I decided that I would just do the old trick of letting them do their second rise in the fridge overnight and baking them in the morning. I made my favorite dough for cinnamon rolls which makes a lovely, squidgy dough – and wrapped them round the marshmallows, dipped them in butter and stuck them in the pans And now we come to the moment where I stop, drop, and show you a picture of my fridge. Brace yourselves. 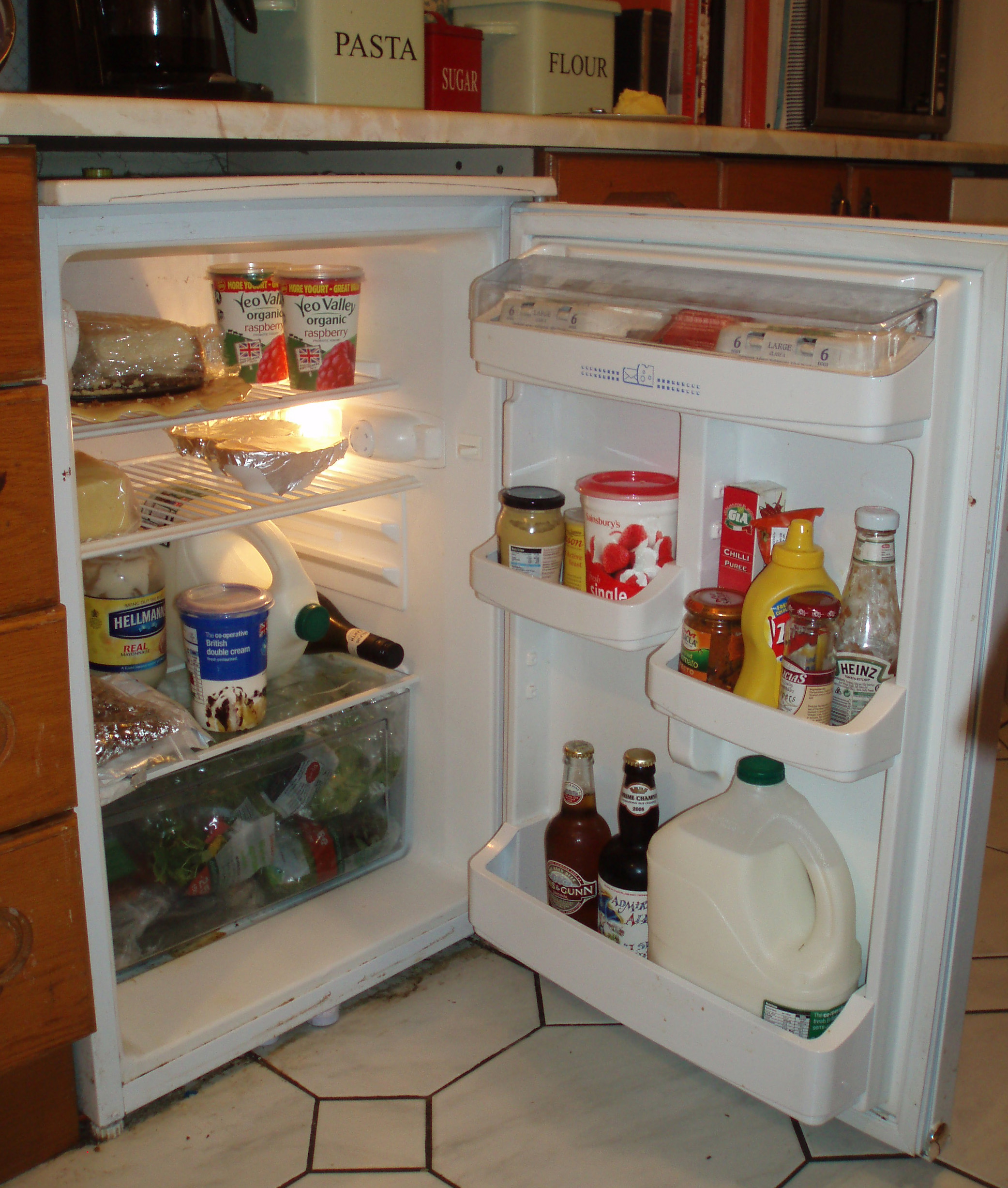 (I would also like to take a moment to congratulate myself on my great spirituality . . . I didn’t even photoshop out the grimy floor underneath, or even reduce the resolution so that you can’t zoom in, check out the smudgy shelves, and raise your eyebrows. No, I am simply flinging wide the door and telling you to drink it in.)

Now – there are several things to note here. The first is that this little fridgette is the only little fridgette in the house. It’s not as if the real one is lurking around the corner, out of the way of the camera where you can’t see it. This is not the overflow fridge, the safety net fridge, the one you keep in the back porch in case you accidentally buy too much milk. No, this is the one and only.

The second thing to note is that I have 8 people to feed, 3 meals a day. And sometimes one of those meals is Easter dinner. Picture in your mind’s eye this little fridgette containing a leg of lamb, a large ham, a cheesecake, 15 chocolate pots, a large amount of cannellini bean salad, 15 stern looking googly-eyed deviled owls who can’t be touched for fear of messing up their very artful features, various marinades and glazes, an extra large batch of bruschetta topping, a potato salad, asparagus, green salad fixings, strawberry sauce for the cheesecake, an assortment of creams, the champagne and white wine for dinner, and then your basic fridge items like milk and mustard and cheese and whatnot. Now that you have that firmly in mind, ask yourself where (late on a Saturday night) am I going to put 2 trays of Resurrection Rolls to rise? Right. Not in the fridgette, that’s for sure. At this stage of the game a jelly bean would have caused the door to fly open and I was in no mood to dig out the bungee cords and try to tether it shut. I was also not in the mood to hang around while the rolls finished rising and baking. I’d spent most of the day hunkered down in a squat in front of that fridge trying and retrying to fit everything into it, and I was just plain done.

So we checked the weather and it was supposed to get quite cold but not freezing . . . and thus we decided to bung them outside for the night. If you start questioning my judgement and looking askance at this point then I just ask you to scroll back up and take another look at that fridge.

We wrapped and double wrapped the pans (9×13 ceramic baking dishes) in saran wrap and tin foil – and then set them outside for the night. I went to bed with that smug, self satisfied feeling that I had handled a problematic situation with the innovative skill always so necessary for this strenuous life in England . . . and I looked forward to a morning with mimosas and Resurrection Rolls as hollow as the Easter tomb.

The next morning (yes, I know, you’ve seen this coming for the last 6 paragraphs) we came down, turned the oven on to preheat . . . and popped outside to retrieve the rolls. And what do you think we found? Empty trays of course! What else would you find on Easter morning? The tin foil was scattered hither and thither, as were a number of the marshmallows, but the rolls were wiped out. So our symbolic Easter breakfast had the symbolic part down alright . . . it was the breakfast bit that got goofed up thanks to a gluttonous and pillaging fox, or . . . or . . . actually let’s not think about that. I’m really not fine with the idea that it was rats, so please no one suggest that it might have been rodents. A fox I’m ok with. I hope he suffered agonies with indigestion, but I’m pyschologically alright with the local fox having done the deed. But rats, no. I draw the line at rats outside my kitchen door.

So, winding to the conclusion, here’s my hot tip for all of you for next Easter. Just bake the rolls on Saturday.