3 guesses where Ben and I were invited last night. And no, it wasn’t an end of term Hebrew translation party. Give up? Well, I never would have guessed it either. We were invited by Blenheim Palace to attend an evening of “live music, champagne, and canapÃ©s.”

Now – even more shocking than the fact that Ben received this invitation (through a long and rather complicated series of circumstances that aren’t really that exciting) is the fact that he said yes we would go. I was adamantly opposed to the scheme . . . I mean, we clearly don’t belong at an event like that, and I was pretty sure we wouldn’t fool anyone into thinking we did. Plus, who would we talk to?! We didn’t know a soul there. Another problem that I was quick to spot – what on earth do you wear to an evening of champagne and canapÃ©s at Blenheim Palace???? Ben doesn’t own a dinner jacket (and he’s about the only man in Oxford who doesn’t I think) and I don’t have a family tiara to bust out. Ben looked squarely at those problems and saw merely an opportunity for free champagne and canapÃ©s at Blenheim Palace . . . which he thought looked like a net plus. But, just to humor me, he asked when he RSVPed what the dress was for the evening, and they told him “smart”. That of course led to some extensive googling. We’ve discovered what “smart casual” technically means . . . and for those of you who are interested, it means (for men) tie, jacket,sweater . . . you have to hit 2 out of those 3 things, and I think the collared shirt is assumed. Anyhow, we’ve mastered that one, but what exactly is “smart”? After the googling session we decided Ben would wear a regular suit and tie (quite absurdly, that’s known here as a “lounge suit” and I was quite shocked the first time Ben received a beautiful invitation to an evening event that specified he wear a lounge suit! That was another googling session.) Anyway, I thought I’d wear a dress, but not an evening gown. After Ben decided we would go I dismissed the matter from my mind, and decided that I’d worry about it when the time came. Each day has enough trouble of it’s own you know.

And the days are having plenty of trouble of their own. We are on the last final wild screaming slope of the England roller coaster – and I have sick amounts of things to get done. I feel like I have 8 pots to keep hot, but only 4 burners on my stove! So what I’m saying is, yesterday we were supposed to leave at about 5:15, and at 4:15 I was still trying to list items to sell on ebay, and get dinner in for the kids, etc. I had also not managed to shower yet . . . all day I was thinking I’d just do that when I got ready to go.

So needless to say, I spent that last hour ping-ponging around the house . . . super speedy shower, and then lots of rushing around with a towel on my head and one shoe on – that kind of thing. But, in the end, I pulled it together and got myself suitably spruced up.

Now – rewind a week. We took the kids to Warwick Castle a week ago for Knox’s birthday expedition. We spent all day in the sun. I forgot the sun tan lotion. I sizzled my shoulders and arms to a complete crisp. They were a shocking cerise pink for the first couple days, and then toned it down to where it could possibly pass as a tan. Then I started to peel a bit, but thankfully I had gotten over that by yesterday.

Mark the sequel. We arrived at Blenheim Palace, which is the residence of the current Duke of Marlborough and the childhood home of Winston Churchill. It’s also the most staggeringly huge palace and grounds you can imagine. In fact, the wall around the grounds is 11 miles long. The grounds are gorgeous, with a lake, and extensive parkland, and formal gardens, and Churchill’s victory monument and all in all it’s quite amazing. Our little event was taking place in the Orangery. Here are some pics so that you can get a bit of a feel for what we were up against here. 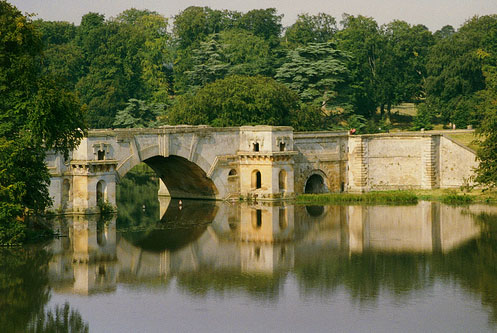 This is the bridge over the lake. Unbelievable isn’t it?

Here’s a picture of the palace from the air. 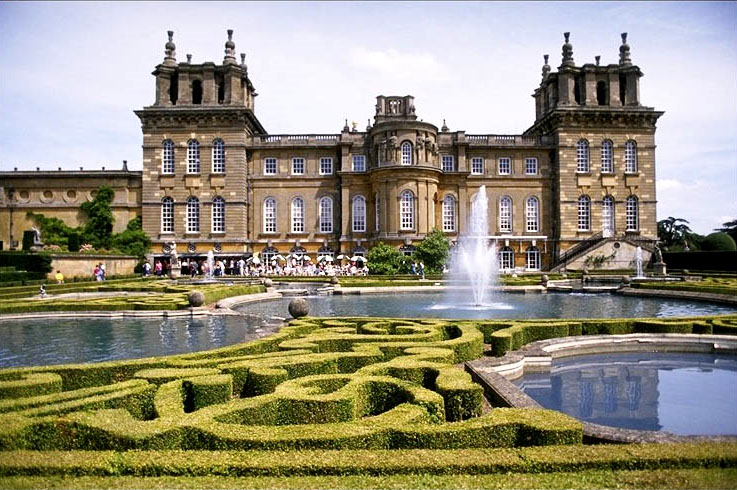 These are the water gardens. 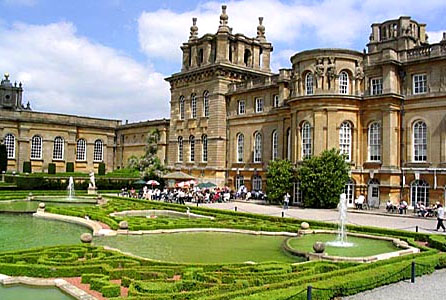 More of the gardens. 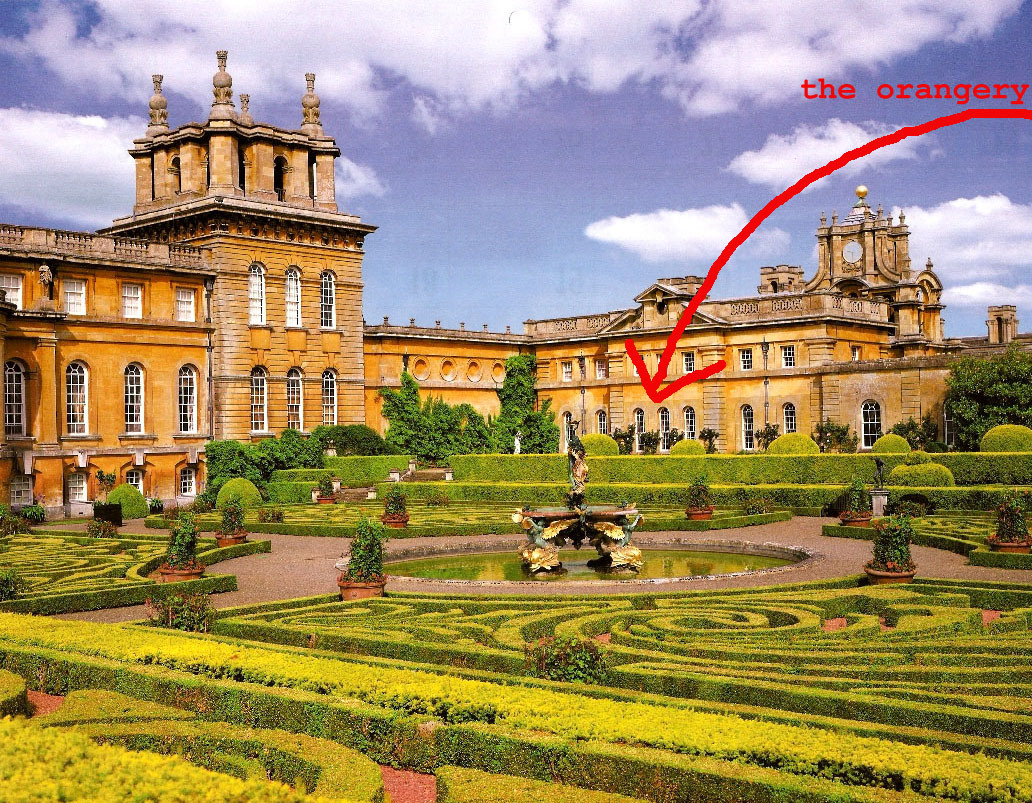 The Orangery from the outside. 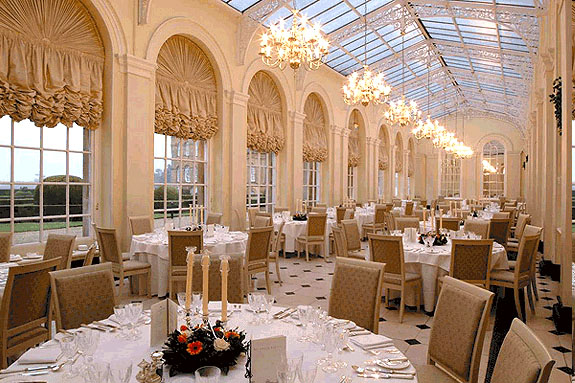 And, finally, the Orangery from the inside.

Ben had gotten me a completely beautiful black silk cocktail coat for Christmas which I had never worn, and I thought it would be a good chance to wear it last night. However, we got to the palace and parked, and I decided I would actually rather leave it in the car. I wasn’t sure if there would be anything to do with it, and I didn’t want to carry it around all evening. So I left it, and we went in. I was in a black sleeveless dress . . . which is crucial to the rest of the story. We walked in to the Orangery, and my first thought, I have to admit, was not the beauty of the room, but a quick relief that we were dressed appropriately – and actually were on the dressier side. That was good. I got a glass of champagne, and started to admire the gorgeous room. Suddenly, I had one of those horrible premonitions, and looked down at my arms.

Absolutely, unbelievably, my entire arms were one huge peeling, flaking mass. Seriously – as I walked I had a little cloud of pixie dust dandruff floating around me. And with a black dress no less. In my hurried racing shower, I had given my arms a good scrub with the loofah, and zinged out the door without pausing to put on any lotion or anything! And between the mixture of the loofah and the soap, I had turned my arms into the biggest dandruff event of the season! I mean, I’m talking BIG peeling flakes – not just a bit of a dry skin problem. Huge swaths of my arms were coming off by the second, in sheets the size of newspapers. And, my coat was in the car. Every time I brushed up against Ben his black suit coat was completely dusted over.

Luckily, we didn’t know a soul there . . . and if I hadn’t just posted it up on the great wide web, no one would ever have had to have known about my molting problem. I could have just pretended it was someone else who didn’t have the sense to wear a cardigan sweater . . .

All in all, it was a truly beautiful evening – and we had a great time. The last chance we’ll probably ever have to go to a party at a real, live palace . . . and it’s just fortunate that I’ve already snagged my Prince Charming and so I didn’t have to worry too much about my little personal flake-a-thon. I just made sure to keep brushing off his coat sleeves every two minutes or so.

16 thoughts on “Another of my smooth moments”