And no, it’s not a Grecian Urn I’m afraid. If this pot could tell stories I’m willing to bet that they’d be far more wholesome and free of suggestiveness than whatever dirty deeds were afoot on that urn Keats was so taken with. 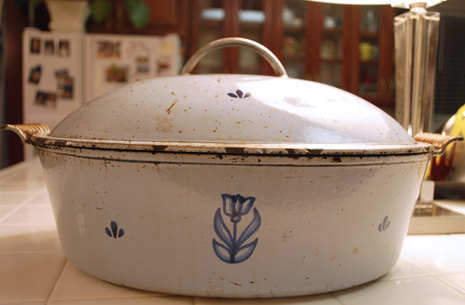 What we have here is an enameled cast iron dutch oven that my grandparents bought in Holland in the fifties. It’s huge. It weighs a ton and three quarters. And for all of my early life, this was the only large pot my mom possessed besides her canner. Pert’ near everything was cooked in this pot. When Mom made spaghetti she would boil up the water in this pot and drop the noodles in . . . sideways. (I don’t think she bought a stock pot until I was in high school!) This was also the one-stop-pot for homemade mac and cheese. Noodles were boiled in it and then drained, the roux was whizzed up in the now-empty pot, everything was reassembled therein and then chucked into the oven. Very versatile pot, this. And due to it’s long years of tireless service, it is now straight black inside. 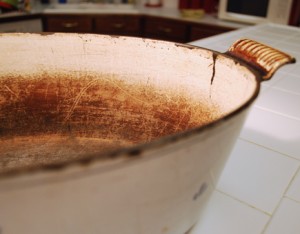 I thought for a long time that it just needed a real deep scrubbing of some sort. Many’s the time I’ve washed it and felt a twang of conscience for not really laying into the black bits with some sandpaper or something. It’s only lately that I really clued in to what’s going on here. All the enamel has worn off the inside, and we’re down to the bare iron. Which means, of course, that we’ve either eaten all the enamel over the years, mixed tastily into the mac and cheese, or it’s been over-zealously scrubbed one too many times. (And if that’s the case then we can rest assured that it is Mom and not I who’s responsible for the situation.)

Mom has a gorgeous array of pots these days – Le Creuset in beautiful colors. But this lowly dutch oven still puts in its fair share of stove top time, and I always love seeing it humming away with steam billowing out the sides. 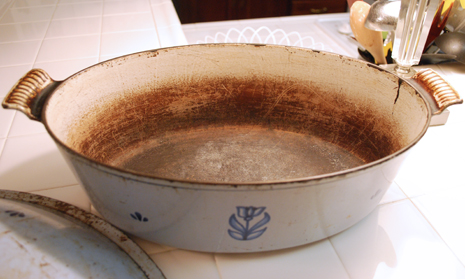 I’ve discovered that I could get more of these on ebay . . . some of which are in pristine condition and their interiors are still a spotless white enamel. And if I didn’t mind paying obscene amounts of money for shipping I would totally start collecting them. But I have to say I’d miss that black interior. In my humble opinion the black adds to the charm.