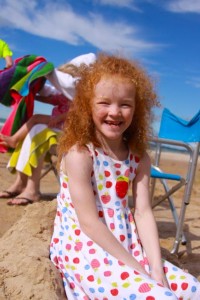 I got this update from Sophia’s mom Kelly. Please be praying for her! (To get up to speed on earlier posts, just look under the prayer request category.)
Thank you for asking about Sophia. She came down with a virus this past Lord’s Day – a thick, tight cough which she wasn’t able to move well.  Because of the floppiness of her airway, it’s difficult for her to clear that kind of junk out, and due to the way her respiratory system is compromised, it hits her fast and takes her down quickly .  I was able to take her to the pediatrician right away on Monday and she is on an antibiotic.  She had a bumpy couple of nights at the beginning of the week – but she is improving.  God is merciful!
We will be in Cincinnati on the 25th for pre-op – bloodwork, chest x-ray, EKG, etc.  The surgery will be early on Tuesday.  The surgeon expects she will be released by Friday.  I will be staying in the hospital with her, while Glenn goes back and forth from home for our other children, and his work.
I think one of the primary prayer requests we have concerns complications.  Those things which aren’t expected and can’t be foreseen as a result of the surgery, or of being in the hospital.  After her initial saline implant surgery, when she was 12 months old, she almost died due to a bacterial infection that had begun in her lung (it looked like a tiny spot on the x-ray) immediately prior to the surgery.  She developed a condition called ARDS.  God gave wisdom to the doctors and healing to her – and she recovered.   But of course we covet prayer for all of it – the surgery itself, her pain level, her recovery, the surgeon – Dr. Manning, our other children here at home.
I really can’t say how much we appreciate prayers.  God has used them to bolster and sustain us time and again – when we have felt weak and foolish.  Since I have been a mommy, I finally realize what my own mom meant when she said she would rather have to endure pain and trials than watch us in them.  🙂  But – still, God has used them in my life to grow me in much needed ways.  And we know – we see – how He is weaving a tapestry of grace in Sophia’s life through the unique way He has fashioned her – and the experiences He has given her because of it.  If we’re going to be truly thankful people- we need to be thankful for all the things God gives us- right?  🙂

If any of you Femina readers would like to send a card to Sophia or her family, here’s the address: