Mysterious doings are afoot amongst the cousin clan. No one knows who it could possibly have been, but someone left top secret letters in all the cousins’ lockers on the last day of school before Thanksgiving break. Each cousin received a manila envelope marked “Top Secret” which contained a very unusual missive. Two of the cousins who are too small to have a locker had them turn up in their backpacks, and the very small cousins had them show up in mailboxes. (By way of background, it should be noted that the Wilson cousins will all be in Santa Cruz for Thanksgiving, the Janks cousins will be in Seattle, and the Merkles will be in Boise.) 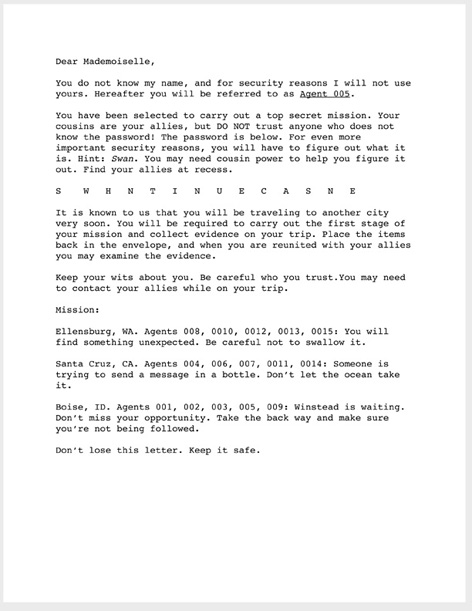 Interesting, don’t you think? Perhaps it’s the CIA. Anyway, the cousins all found each other at recess, and it turns out that each one of them had a different hint listed in their letters. Here are some of the others: It’s big. It’s beautiful. It’s foreign. It’s closed. It’s German. You’ve been there.

In the top secret meeting at recess which took place between the school buses, the kids figured out the password almost immediately. Agent 008 wouldn’t even tell her mom what the password was after school. “It says not to trust anybody, Mom.”

Immediately after school, the cousins all scattered to the four winds for break. I can’t speak for the others, but the Boise contingent has had even more strange communications that took a good deal of wit to decipher. Yesterday, in the middle of a snowstorm, the beagle at Granny’s house began to bark frantically. After going outside to investigate, Agent 005 discovered a capped beer bottle tied to the gate in the back yard, and inside was another mysterious note – this time in code. Oddly enough, there were no tracks in the snow – Dad was on a plane to England, and Mom and Granny were out running errands. So it couldn’t possibly have been any of us. Plus, my kids already made me give them a handwriting sample to compare to the “top secret” on the envelopes and I was completely cleared of suspicion because the handwriting sample I gave them was much more “loopy” than the writing on the envelopes.

Anyway, here’s what they found in the beer bottle: 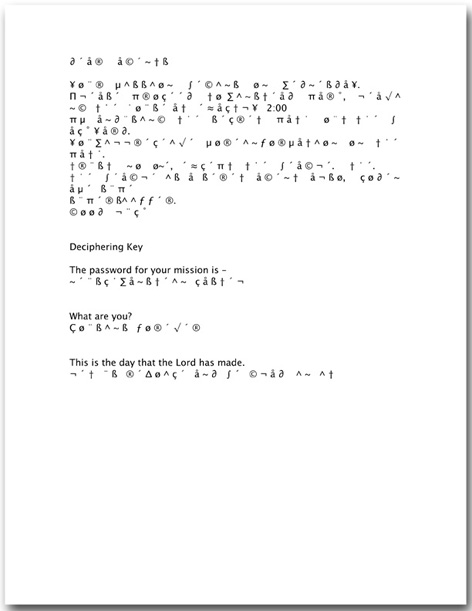 Also, it should be noted that this mystery looks as if it may take all of Advent to unravel – and even the most devoted of Dave Ramsey enthusiasts can’t object to the price tag. It’s an awful lot of bang for zero bucks. (Although the ultimate treasure at the end may well involve some cash!)

20 thoughts on “The Great Advent Mystery”