So . . . who wants to hear about my plumbing??!?! You’re all so excited, I can tell. Ain’t nothin’ like a good tale of plumbing drama.

Not to keep you in suspense any longer, let me begin by saying that ever since the great tree incident, our plumbing hasn’t been quite right. When the toilet flushed there was a mysterious “bang” coming from somewhere. Somewhere not in the bathroom. I told everyone that needed to know . . . the engineer who is in charge of the repairs, as well as miscellaneous extra people. Many people patronized me about the bang. Not badly, but you could tell they were mentally patting me on the head and saying, “There, there.”

Then we left town. And the snow came. The snow came in a big way. When we arrived back in town on Friday night, our house had new fresh cracks in the walls, and then on Saturday the furnace went out. It got fixed though, and that isn’t the point. The point is that (also on Saturday) the plumbing was very distinctly wrong. The bang was no longer ambiguous. Weird noises were coming out of all the drains, and when I turned on the washing machine, the toilet came to a rolling boil, which is something you never really want to see.

On Sunday morning, the drains gave up altogether. No water would leave our house. It was as if the water had all unanimously decided that it was cozier inside than out. Nothing would go down the toilet, the sinks, or the tub and we had to call a plumber in Portland.

Fast forward to when the plumber excavated the sewer line on Monday. What do you think the plumber pulled out of the sewer line under the house? No, not a Lego spaceship. It was a long board. And when I say long, I mean a good twenty-eight inches. And I would like to take this moment to go on the record and state that we did not flush that. Had it been the Lego spaceship, I wouldn’t have been so sure, but the board I can be confident about.

Now let’s refer back to that photo of the tree on our house. 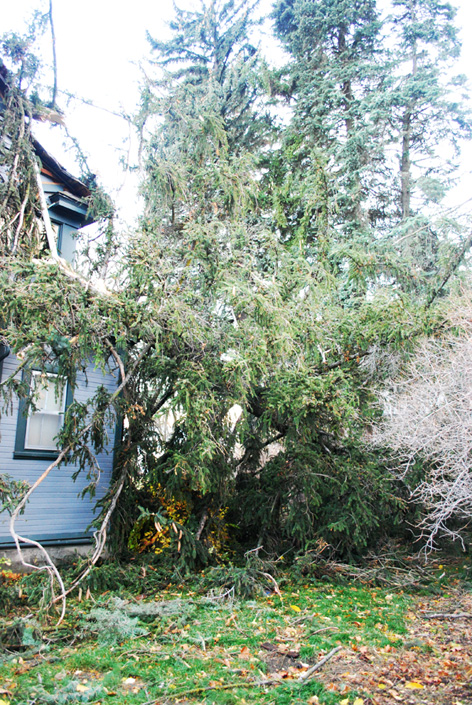 Do you see that white pipe that’s all akimbo there in the upper foliage? That’s the toilet vent. Apparently, the tree ripped a board off the house, and in a tricky exhibition of dexterity, it fired the board straight down that pipe. For the next ten days the board worked its way down the pipe, through the wall, and down under the house before it finally stuck fast and clogged everything up.

I’m feeling very smug now. I said there was a “bang” and everyone looked at me as if I had said that a cow was barking. “Pipes don’t bang,” you could see them saying to themselves, “they gurgle.” However, I think we can all confidently agree now that I was right. A large board, working its way through the walls with every flush definitely makes a “Bang.”

Thank you. That’s all I need to say.