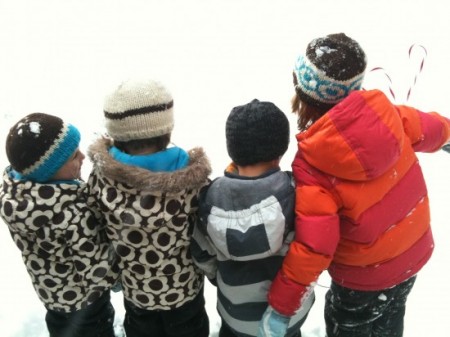 It is pretty snowy around here. Believe it or not, this photo was taken on my front porch looking out at the world. There is not a lot in nature to look at, although you can see the faint outline of our candy cane lights! I made these hats for the kids to match their new coats (which Lina is not wearing right now – oh well, I like the burst of sherbet). I realized that I never took any pictures of them, and it is a miracle that they are all wearing them still. At least one or two have been in the school’s lost-and-found. Actually it may have been the same one twice. Either way, now that I have documented them in photos, I don’t care where they end up!

But, speaking of hats, I was talking to a friend and fellow-knitter who also has a daughter in Daphne’s class. She knit the cutest little hats for her girls, but one of them vanished its first day at school, and weeks later, there had still been no sign of it. Later, the same day I heard about the missing hat, Daphne rolled in from pre-school after being dropped off by the Merkles. She started unloading her backpack (she always does this upon arrival – every paper is laid out on the floor for me to admire), and whipped out a red sweater that doesn’t belong to us. When I asked where it came from, she said her teacher put it in there. So I put it back in with instructions to give it back the next day.

A little later she said,  “Mom, do you know what happened? Once, a long time ago, my teacher put Lola’s hat in my backpack!”

I was all ears. “Well, where is it? Do you know what happened to it?”

After a pause she said, “Yeah. I just threw it into the back of the Merkles’ car.”

So, all I am saying is that I think I might know who did what with the green beans.