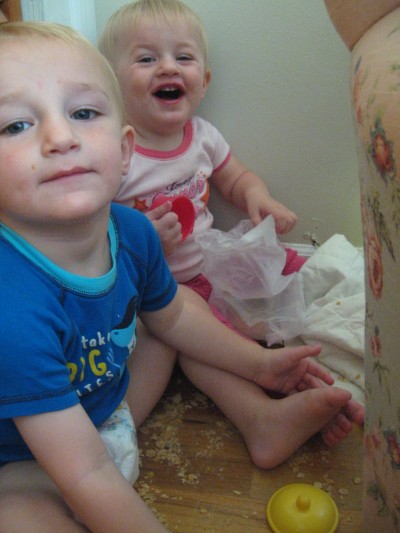 Here is a little photo from the archives. The twins escaped with a bag liner from a cereal box to a special hide out behind the chair in the girls’ room. Ah, the good old days! They never make messes now!

Sometimes I wonder what it is that we have been doing that keeps us from popping in and blogging? But then again, sometimes at the end of a single day I cannot remember what I did. I am pretty sure that this is the nature of repetitive work. You do it every day, or at least so often that you forget to notice that you are doing it at all.

This is why I would like to have  a security camera in the house. A little something to play back at the end of the day in super-fast motion to see how many times the living room got blitzed, and how many times it got picked up. I might pause the tape around 3:00 and say, “Look what I did, Honey! It looks pretty good!”

I am also sure that the dinner-time rush (also known as the witching hour) would be funny to watch in fast motion too. Last night while I was making dinner, there was some sort of a major button spill in the kitchen. Also a lot of coloring. Someone playing in the sink. Blaire mostly being held, or if not, trying to eat buttons. The dishwasher being unloaded by free-range helpers.

However, a security camera would also show me the things that I would like to forget, like stepping on a four-inch SLUG in bare feet in the kitchen on my way to pour my morning coffee. For reals. It came in, half mangled, on the shoe of the garbage-putter-outer. Not what this early morning mother was expecting. You just don’t go into your kitchen looking for that kind of experience. Munched up cheerios? Sure. Sticky spots? Of course. Slugs? I ask you. Really? Doesn’t that seem to be taking it too far?

The other day I was walking down the hall when I was passed by one of my excellent three-year-olds (pictured above), running full speed with a box of kleenex held high above her head. I smiled at her, she yelled (not to me) “TISSUE FIGHT!!!!!” and that was that. I kept on walking down the hall for a few seconds until my mind instant- replayed that one for me, and I pulled around to intervene. This could have very easily turned into a clean-up later that befuddled me. Who was scrunching up kleenexes and putting them everywhere? But the kids – they would know that I practically blessed that endeavor! “Mom won’t mind! She smiled about it!”