“Mom’s almost here with the pizzas, and we’re all supposed to hurry as fast as we can, and Judah won’t get out of his Gilgamesh suit!”

Yes. That is a direct quote. I’d like to leave the post right there actually . . . I feel like it really says it all. But on the other hand, I can’t quite pass up the opportunity of showing you what Judah looks like in his Gilgamesh suit, and why he’s so reluctant to ever get out of it. 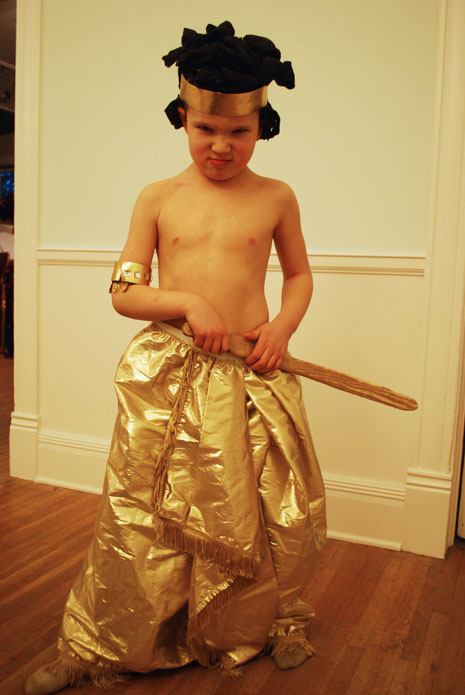 We were having one of those silly days. Not so much because of the Gilgamesh suit – that’s actually pretty run of the mill at our house as Judah loves nothing more than a good warrior costume with a bit of bling. But mostly because Jemima’s birthday is April 1st, and she wanted to do another silly cake to take into her class. So on the afternoon of the 31st I was charging hither and thither trying to get kids home from school and to and from piano lessons and husband to lacrosse practice and who knows what else. We had decided on pizza cupcakes this year (as opposed to the spaghetti and meatballs of 2010), so I needed to swing by and buy a pizza box somewhere for us to pack them in. Jemima was at home actually baking the cupcakes and Judah was Gilgameshing away. Meanwhile, the Pizza Nazis at Dominoes refused to sell me a box unless it had a pizza in it. Since by this point in the afternoon it was actually more like 5:00, I decided that pizza sounded like a great idea . . . but not from Dominoes since I was feeling thwarted by their stingy methods with their boxes. So I called and ordered 2 pizzas from Pizza Perfection while I grabbed Ben from lacrosse and dropped him off at Hebrew. I then zoomed over to pick up the pizzas, while coaching Jemima over the phone about how full to fill the cupcake pans. I decided we might as well share the pizza wealth with Papa and Nana, so I told Jemima that I would pick up Daddy from Hebrew and be home in a minute with the pizzas, and if she and Judah and Bel were ready to go  then we’d all be good to go since I had picked up Knox and Hero from piano and they were in the car with me and then we’d all head over for pizza at Papa and Nana’s house. It was at this point that I was endlessly blessed by the above quote which I heard over the phone.

I’m kind of torn about the Gilgamesh costume. Should I explain that? Or just leave it ambiguous and let you wonder if we might have stashes of Agamemnon hats and Sophocles sandals that our children like to hang out in. But as much as I’d love for you to think we’re actually that weird, it turns out that we’re not quite. Just almost that weird. Knox had to be Gilgamesh in a school play, and so I made him that costume last year and it’s been hanging around ever since but only recently discovered by Judah. I wish I knew what had happened to the beard because it was awesome. It was one of those long black ringlet kinds and it added quite a bit of drama to the look.

And on another note, here’s how the pizza cupcakes turned out in the end. Not a very appetizing pizza to be sure. Also not very appetizing cupcakes. But festive enough for an April Fools birthday in 5th grade. 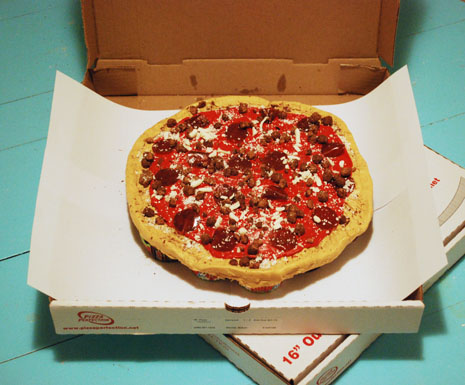 Clarification due to that being misinterpreted as a large cookie on top of cupcakes: Those are cupcakes underneath, and the crust / sauce is frosting. Pepperoni is fruit leather, sausage is cocoa puffs mixed with a bit of peanut butter, and the cheese is grated white chocolate. Sounds delicious right?

15 thoughts on “A little slice of Merkle Mania”