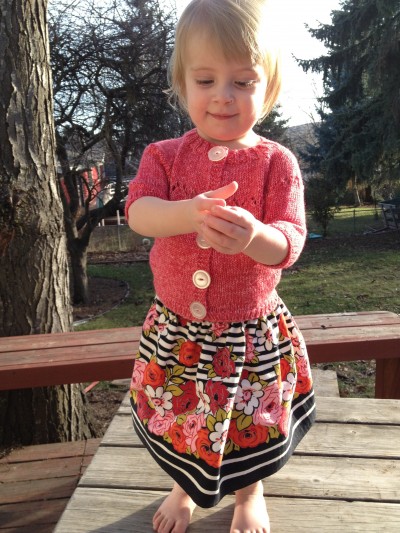 Things have been pretty much like the weather around here. One day 65 degrees, sunny, and the kids are all outside playing in t-shirts. Then the next day we are having a wind-snow-sleet  blowathon. This is the way things are in Idaho at such tender times of the year as March. But we have been matching ourselves to it nicely. One day I have a chance to sew – with the windows open incidentally. So I made Blaire a quick skirt out of some hilarious vintage fabric that I love. I bought this in the form of a vintage (epically unflattering) apron at a yard sale. Later, I made it into a maternity skirt which I wore when I was pregnant with Lina. Then it was a curtain in my craft room. Anyway…

She needed something to match the new sweater that I had just finished knitting for her. Yes, you read that right. This was my first real knit since the morning-sick phase, and I was so glad that I was able to wrap it up in a reasonable time frame. Anyway, along with this brilliant and sunny happenstance, we had a  major moment, the sort that only comes your way once in a wonderful while.

Let me tell you all about it. It was mar-ve-lous. The day was sunny (as mentioned above), and gave me much reason to appreciate having a completely fenced back yard. I sent the kids outside to play. I can see them easily from the house, and I was aware that they were playing in mud. Ok by me. Healthy stuff, mud. Once the kids are in the backyard on a daily basis, I would probably feel fine about banning mud mixing as a task, but they were having a glorious time. It looked like they were making mud eggs, nests, and cooking with it. They had a camp. They were transporting puddles on the precarious trays of frisbees. Things were good. The longer it went on, the more I began anticipating re-entry with a touch of concern. Need to make sure they come through the garage. Need to be sure they leave their Bogs in the garage. Need to do it one at a time so that when I peel off the clothes in the garage and carry them to the shower they still have some dignity. Need to find everyone clean clothes. But in the meantime it was so quiet inside, and so sunny. So nice.

Then Titus came to the door. He wanted to come in. I think that it may have been the mud build up that was causing discomfort. So I whisked him in, popped him in the shower. I forgot to mention that he came in the wrong door. Not the garage. And a few mud chunks fell off his clothes on the way to the bathroom. And when I got him in the shower, there were even more mud chunks scattered upon the floor. Not ideal, but manageable. Then I hear Chloe letting herself in downstairs. I hustle off, grab her as she staggers around trying to get her bogs off. Mud is a flying around on the carpet, and the entry way. She came through the garage, good girl. But she was unable to wrestle her Bogs off without a lot of flailing about. So the entry also made an impact on general cleanliness in a totally different area. I haul her off upstairs and pop her into our bathroom shower. Peeling her clothes off also scatters dry mud about the floor. Second bathroom floor messy. I head off to get some kid shampoo or something for her. As I pass the hall bathroom I see Daphne, manfully trying to get all the wet mud off of her hands with a large wad of toilet paper that she has soaked in the sink. This was done out of concern for not getting the hand towel dirty. I removed the toilet paper from the equation, noting as I do so that this effort has basically just wet the mud into a highly fluid, splattery, drippy state. And it has really made an impact on the counter, the floor, and the sink. I tell Daphne to come downstairs with me, and as we round into the living room, the sight that greets us is Blaire. She is sitting, encrusted in mud, on the couch. She knows not of shoe removal (and she had chosen her gold shoes to pair with her sweatpants), and far from trying anything to remove them she simply walked across the carpet (and apparently around a few other places too),and scaled the side of the couch. She is sitting smugly on the couch with a partly eaten apple that she scored from a counter. Not being able to control myself, I took a picture before I gathered her up and took her upstairs to the shower with Chloe. 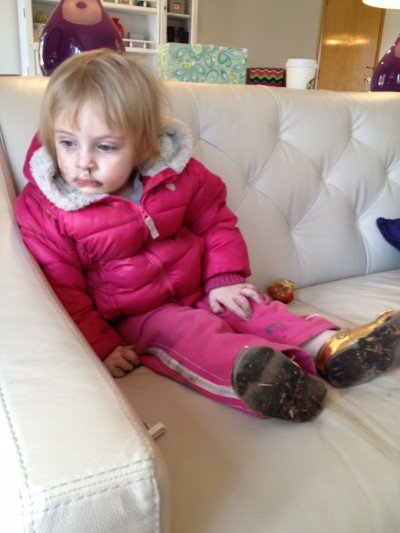 She had mud in her ears, in her nose, and elsewhere. So I’m not sure why I was still surprised when a bunch of dirt clods rolled out of her diaper onto the carpet in our room outside the bathroom door. Oh well. So I pop her into the shower as I hear Lina calling from downstairs. I tell her to go straight to the shower that is downstairs and  get in. She knows what to do with the Bogs, but it doesn’t matter anymore. She heads down, and a minute later starts yelling for help with turning the shower on. I finish washing Blaire’s hair, wrap her in a towel, and take her with me to help Lina. I think it was at this point that I remembered Daphne in the kitchen and told her to go get in the shower with Chloe. Blaire and I arrive in the downstairs bathroom, and I set her down while I get the water temperature right for Lina. This shower is very touchy, so it takes me a minute. Blaire calmly says “yucky” behind me, and I find that she has peed all over the bathroom floor. So I rinse her off again in the shower with Lina, clean up the floor, and get her diapered and dressed. We go upstairs to answer the distress signals. Turns out someone had to go potty pretty bad. So they let themselves out of the shower to run to the potty. Having first seriously overindulged in body wash helped to cover the bathroom floor in suds. But remember that we had a lot of dry dirt clods first. So we were able to make a nice muddy bubble situation all over the floor. Titus started yelling that he wanted to get out. Daphne still has standing mud in her hair along with the shampoo, so we absolutely have to finish washing her hair even though the water is now shockingly cold. I put Blaire in her crib to keep her out of the muddy bubbles, which is what she clearly felt called to. She provides us with the soundtrack of wrath for the next several minutes.We finish up with the hair, but not without a little bit of sorrow. I get two girls out of that shower, and go to remove Titus. I see Lina coming up the stairs in a bathrobe, but trailing a constant stream of water. When the water went cold she had just gotten out even though there was not yet a towel. I tell everyone to get scivvies on, and sit on their beds until I call them. Some of them have no clean pants left. All of them are hungry.

And that was the sunny day!

51 thoughts on “Some Doings of Every Kind”