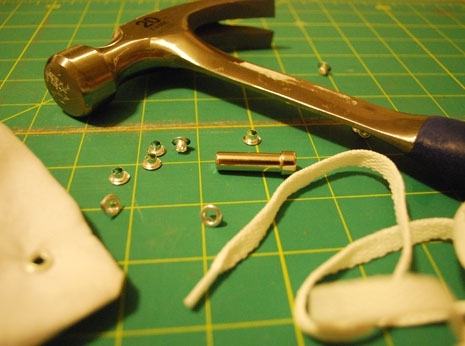 Red alert, folks. I’m being a tidge pompous. I think I just may have solved one of the great conundrums of the ages. Nate had that whole Shroud of Turin thing . . . and I’ve been feeling the pressure to keep up with my little brother. This is my moment. I’m expecting National Geographic to call any minute.

I’ve sewn more duvet covers over the years than I care to think about, and I’ve always had a love / hate thing going on there. The beauty of the duvet is that it’s washable, relatively cheap, easy to make yourself, and makes re-decorating a breeze. On the downside, the bedspread shuffles around inside the cover, eventually twisting itself into a giant lump of sin and evil that is impossible to solve without removing the entire thing and trying to re-insert it. It is at this point in the process that I, myself, become a giant lump of sin and evil . . . because there are few things in the world worse than crawling around on the floor trying to smoothly insert a bedspread into a duvet cover. “Claustrophobic” doesn’t even begin to describe it. At the end of the process I’m always a sweaty, angry, red-faced, static-haired stinker.

Way back in my early duvet sewing days, a lovely interior decorator friend gave me a hot tip. Sew ribbons into the inside corners of the duvet cover. Then you simply tie around the corners of the bedspread to hold it smoothly in place. Brilliant. So I did that for years. It was better than nothing, but I’ll tell you about the troubles I encountered with this method because I’m sure you’re dying to know all about it. First of all, if you tie it just to the very tip of the bedspread, it slips out. If you tie it to a biggish lump of the bedspread, then you have what looks like a tennis ball stuffed into the corners.  If you tie a bow with ribbon, it unties. If you tie a knot – then you’re stuck untying a knot next time around. Also, ribbon frays – and no one wants to try to sew a tiny hem at the end of a ribbon. There’s always fray-check I suppose . . . but still. All in all, the system is not ideal.

Enter my amazingly awesome plan. It’s Spring Break this week, so I’m sewing new duvet covers, shams, etc. for my three girls. (Loads of fun incidentally . . . I let them unroll bolts of my fabric all over their room yesterday and they each got to pick out their own coordinating prints and we had a grand old time.) Anyhow, I think I have officially solved the duvet problem.

First, I placed a small metal eyelet in each corner of the bedspread. Then, instead of ribbons, I sewed shoelaces into the corners of the duvet cover. 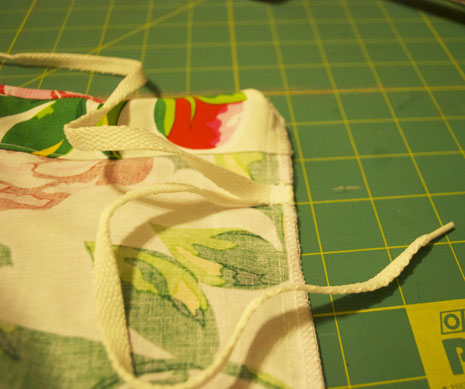 Do you catch the subtle brilliance? First of all, the end is finished off, and won’t fray . . . even in the wash. Second, shoelaces are a much better texture for staying tied. After all, that’s their entire purpose in life. I’m sure there are whole armies of shoelace engineers somewhere, dedicating their lives to the question of optimal texture for tying performance. Or something like that.

You need two sets of shoelaces per duvet – and I trimmed them down to a length of 12″ which leaves enough room to comfortably tie it, but not have laces dangling out the opening. After the duvet cover was finished, I laid it (inside out) on the floor and placed the bedspread on top of it. Then we threaded the laces through the eyelets, tied them in a double bow, and then simply flipped the whole thing right side out. Not once did I have to stick my head inside or grope blindly around in the end, trying to find the corner. Totally amazing.