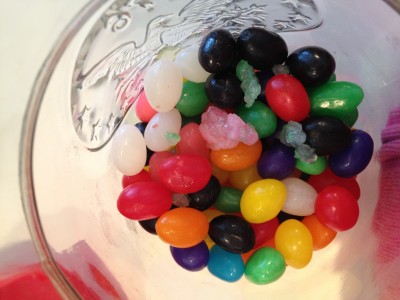 I can’t put my finger on how long it has actually been that I have been trying to clean out the house. This is probably due to the fact that the housework around here uses very little punctuation. Run-on sentences are our game. When one might have reached a semi-colon in the laundry tale, there is always a parenthetical remark about the state of the fridge shelves. But in spite of all that, I carry on. One piece of punctuation in my housekeeping life for the past several years has been the summer yard sale. It is the time of year when I start deciding that no one needs the purple snow pants anymore. I decide that I will not save all the maternity clothes from last time because I never want to see them again, and because if there is a next pregnancy I will buy new shirts to make baggy.

I can be a merciless purger, and we have enough children to produce a mighty load of cast offs. But that is not all – we go in with friends. We advertise our sale with the number of children represented in clothing from infant to grade school. It is usually in the thirties. We always have furniture and baby gear and home decor, and the yard sale has grown in song and legend. I have had checkers at the local grocery store ask me if it was coming soon. It has a reputation.

Traditionally, I begin sorting and pricing and purging and cleaning the whole house out mercilessly weeks ahead of this event. I try (and have had various levels of success) to have the house all clean and together by the time the actual sale rolls around. Last year I didn’t. We had moved into our house not long before – there were whole rooms that had no furniture and no destiny. There was a lot of muddle. As I recall I failed to price anything in advance. I somehow lost all grip on the housework around this time. And as the house deteriorated, the yard filled up with all the cast offs of all the land. The garage was end-to-end children’s clothing tables, and whenever I looked out the window, I would see the husbands of friends pulling up in pickups to unload the things that had been haunting their houses. It was shaping up to be a great sale, and everything was fine except the interior of our house. I had done some purging, but it had left a mark.

In the heat of all this yard-sale prep, my children were revving up enthusiasm for a bake sale. So somewhere between all the last-minute pricing in the darkness, and the walking over broken hangers in the living room, I fired up a batch of cinnamon rolls. I think I put the dough in the fridge so it could proof overnight, and when I got up in the early dawn to join the ladies with sharpies in the front lawn, I threw them in the oven. There was some running in and out and spilling frosting on the counter, and the kids were all up by then and spilling cereal and milk on the table and floor. But the cinnamon rolls were done! And they were going to sell them!

My sister-in-law brought over a little card table, cash box, and chairs for the cousins to sit at and sell their goods to the line of customers waiting to cash out. There were a lot of people in the yard, and the kids were turning quite a profit. The goods were flying off the table. But what this foolish mother did not realize was that the children were spending their money as fast as they got it. They wheeled and they dealed.

When I discovered the dark deed, it was too late. I came in our front door for something and lo! Scattered about the entryway was a doll with a wide assortment of pilly acrylic clothing. When I inquired, I found that this doll was already named Fatty, and she was already much beloved. She had been purchased with the bake-sale profit. She was ours. As I realized that the short people had been buying and selling as fast as the big people, the nightmare became a reality. Heather barely caught Lucy trying to purchase herself a run-down old bridesmaid dress. Titus had laid out money for a broken plastic electric guitar toy. Chloe had bought a white stuffed pony with a Wells Fargo bandana. We had some new beanie babies. And we had so many clothes for Fatty the doll. There were other purchases too, but I can’t remember them all.

This year we didn’t do a yard sale, although I’m sure we will be back at it next year. Maybe next year Fatty will be available once again, to bring her acrylic pills to someone else’s home. Next year, when the yard sale rolls around, we will have an even bigger problem on our hands. Because now the people who can’t wait for the yard sale are the short people. It has gone down in their book as the day of all days – when the selling and the buying were at their finest.

23 thoughts on “Memoirs of a Yard Sale”