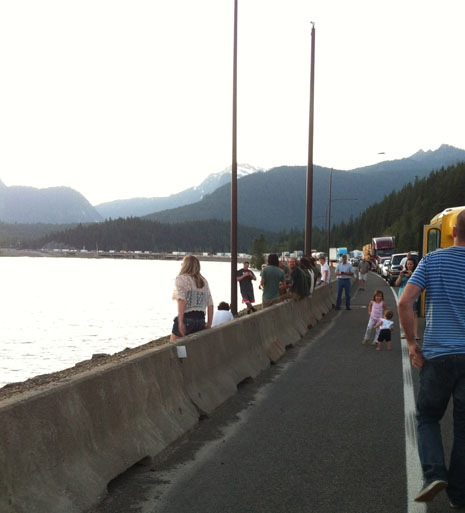 Ben and I rolled in the door from England recently . . . or rather, rolled into the Seattle airport. The plan was to hop in the car and dash home (for those not familiar with distances in the northwest, that’s about 300 miles.) But by the time we were on the road it was  7:00 p.m., we had been awake for 22 hours or thereabouts, and delirium was setting in. (On the other hand, this was absolutely nothing to some of our previous trips!) We were cruising along, radio on, windows down, trying everything to stay awake, and me diligently iphoning up distances to the nearest Starbucks. We were still in the game. Slapping ourselves from time to time in order to scare our eyeballs back into the correct positions after they started to cross. But then we hit a small and understated sign which read, “Road Closed for Blasting.” And, sure enough, as we came around the corner we found ourselves deeply ensconced in a very major traffic jam. Eventually we realized we could turn off the engine. Shortly thereafter, Ben popped his seat back and took a nap while I kept watch to make sure he would wake up once traffic started moving again. I needn’t have worried. After a smallish power nap he woke up again. People were beginning to get out of their cars. We decided to join them. We sat for a while on the concrete barrier, enjoying the summer twilight, watching as some enterprising souls up the road decided to seize the moment to go swimming. 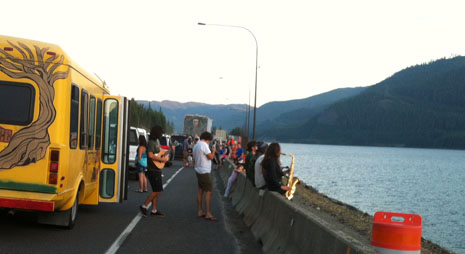 A hippie bus up ahead of us unloaded, and we watched as a guy with a guitar began to thrum out a little tune as he strolled around the road. A game of frisbee started up. People took their dogs out for runs. The guitar chap was joined by a second guitar chap. Oddly enough, a trucker actually busted out a ladder, climbed to the top, and began to adjust things on top of his rig. Bongo drums came off the hippie bus. And then a tambourine. And a sax. The hippie bus was turning out to be a sort of large scale version of Mary Poppins’ purse. Soon there was a full on hippie concert in progress. A very cute little toddler began to dance. The whole thing was weirdly surreal, especially since I was watching it all through eyeballs that staunchly refused to cooperate with each other.

Eventually the blasting finished and we all hopped back into our cars. The strange moment of unity and solidarity with our fellow travelers came to an end. I began once more to google for Starbucks, and the sorry truth was that there was no way we were going to reach one before it closed. We were defeated. Without appropriate and judicious megadoses of caffeine we were definitely not going to make it 260 miles. So we cheesed it and slept at a truckstop in Ellensburg.

6 thoughts on “Back in the USA”