So we have been trying to rev our way into Christmas. About time, I know! Our Advent mittens are up at last. Here is my sweet Daphne showing us a few: 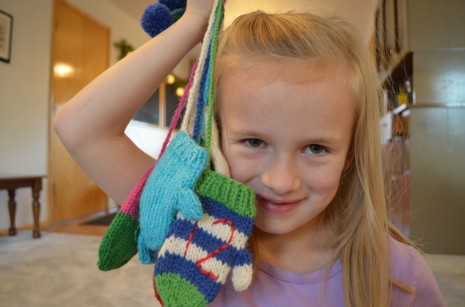 There is a little craft fair tonight that is raising money for our teacher’s Christmas gifts. I made some doll sleeping bags which were super simple and quick (once I got around to actually doing them – that part took a long time). I used this tutorial, fabric I had in my fabric stash (I admit I love funky older fabrics, and this was a fun time to use them). My brilliant innovation that I am stupidly proud of was using nylon potholder loops for the ties. Super simple and fast, and they come in cute colors, which you already knew because they are all over your house. 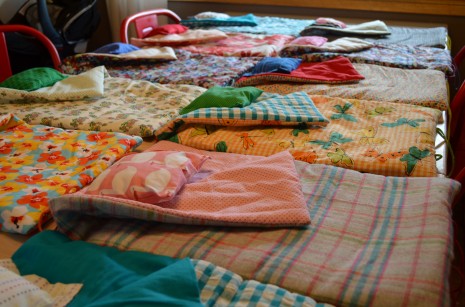 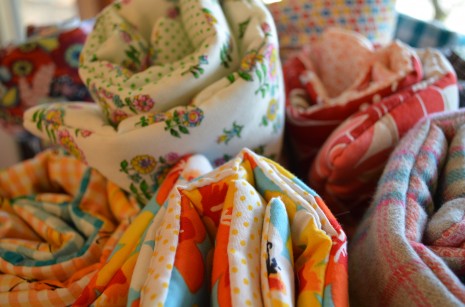 So yesterday, for the Advent surprise the kids got to go shopping in the stuff that I made for the craft fair and each pick something. Titus picked one of the bear/dog/mouse/mystery animals that I knit, and Lina picked a tiny raccoon, and the other girls picked sleeping bags. You just can’t sew twelve doll sleeping bags and not let your own girls have one, and I know myself well enough to know “I’ll make more later” was a bad idea.

I also made one of the most random standby recipes of ours: a little gem we call Trash Corn. 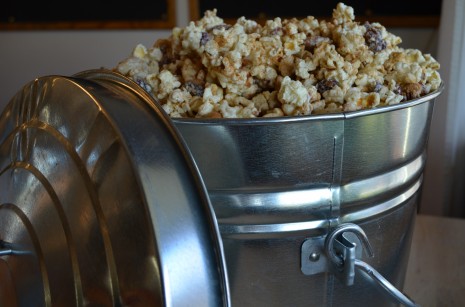 I got the recipe originally off of a random google for popcorn recipes. However, it was called something like “Razzle Dazzle Popcorn Classy Surprise”. Motivated by forces I cannot remember I made it, and lo, it was delicious. The original recipe calls for a final dusting of edible glitter. Makes for an all around more elegant popcorn experience. I was plumb out of food glitter and didn’t have the time to run to the store today, so this batch is a little less classy. I bought the mixed nuts at costco, and they claimed to be “extra fancy” so that should make up for something. Here is how I do it. Pop 4 bags of popcorn – I use the kind that is less fake butter. Healthy pop? Something like that. I take the popcorn out, making sure to leave the old maids behind to not break teeth, and put them all in a clean (duh) unscented (of course) trash bag. Then I melt three bags of white chocolate chips. I throw a bunch of craisins in the bag, and a healthy spattering of mixed nuts. These include the macadamia nuts and exclude the monster brazil nut attention hogs. Pour in the melted chocolate, and twist the bag shut leaving a air pocket in it. Then shake. When it is all semi-evenly coated, you spread it out on something and sprinkle with cinnamon. Kind of a lot of cinnamon. Edible glitter at this phase if you are classy like us. Then you invite people to eat it, and you won’t need to ask them again. 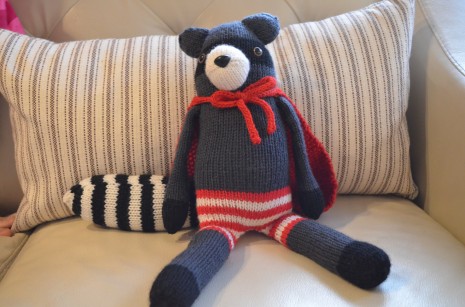 I love knitted toys, but don’t love knitting them the most. So I think that this Racoon’s super-power is pushing through to the end, because that is how his cape was made. By the sweat of hating seed stitch. But, he is adorable. But not as adorable as Radrach himself, as you can see. 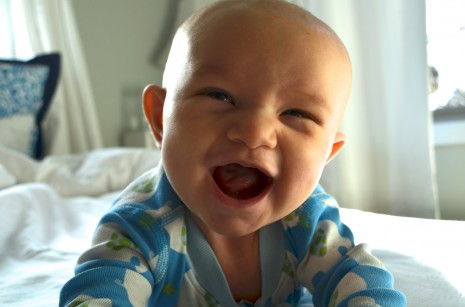 It is just getting merrier around here every minute!