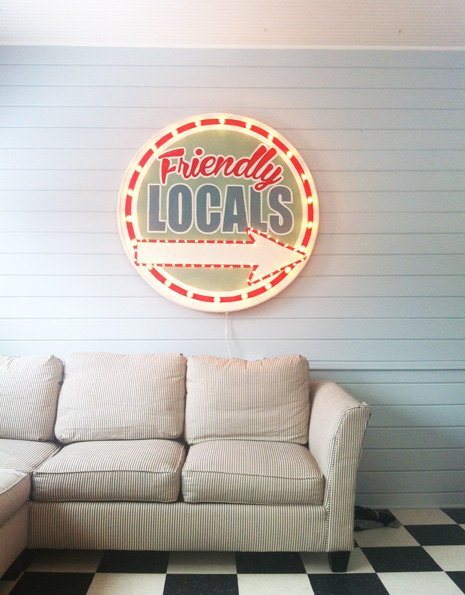 So anyways, I need to tell you about this neon sign I made. For my kids. For Christmas. Which makes no apparent sense. And also I should tell you why the couch I reupholstered is no longer in my living room, and why it has a tear in the arm (look close – it’s there), and why it’s looking generally a bit more dilapidated than it has any right to look after such a short space of time.

We have this awesome old room in our upstairs which apparently (back in its Victorian days) used to be the sleeping porch, and what with one thing and another, it needed re-thinking. A while back, it was featured in Studios Magazine – and this is what (one corner of it) looked like at that time. 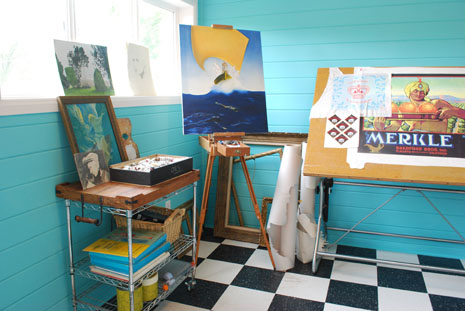 I had all my art stuff, sewing stuff, Amoretti stuff in that room. But I’ll be real. When the photos were taken for the magazine shoot, that was the one and only time the room was ever tidy. (Which gave me great hopes that that’s how it is for ALL magazine shoots, but somehow I doubt it.) Since it was kind of the “extra” room, it also ended up turning into the dumping ground for all the random bits and bobs in our lives that didn’t really have a home. And because it was upstairs, that made it extra convenient to just drop things off in there, shut the door, and then forget about them. Eventually we found ourselves having to rope up with a climbing harness to safely negotiate the dangerous terrain as we walked through the room.

Then it was time to think about Christmas. We had this big extra room that was technically just for my stuff – and I reckoned it was time for me to stop being such a hog. We decided to re-do the room as a sort of hang-out room for our five kids, and keep it a secret until Christmas morning. First things first, I needed to change the color. Can’t make a room for a 14 year old boy to hang out in that’s bright turquoise. So I decided to go for a grey. That would be nice and mellow and neutral and not too gender specific. The room has tons of windows, but there’s one big blank wall. I  wanted a huge, groovy sign on it- one that lit up.

Changing the subject, but not really, I should tell you a story about our kids. The first year that we were living in England (six years ago now!) our kids started randomly saying – at entirely inappropriate moments – that they were friendly locals. It never made any sense. For instance, in the middle of breakfast, one Merkle child would look at another Merkle child and say, “Hey! We’re friendly locals!” to which the second Merkle child would reply, “Haha! Friendly locals!” Ben and I were stumped. The context never warranted the remark whatsoever. After several weeks of this, I had finally realized that they said it whenever they noticed they were doing the same thing as someone else. “We’re both wearing blue shirts! We’re friendly locals!” or, “You asked for chocolate chips on your porridge too! We’re friendly locals!” Of course, it still made no sense – but at least I had narrowed it down in my mind to them saying it whenever they matched someone else. (Bonus points for anyone who knows in which book ND Wilson casually drops a reference to this! Guesses?)

Then one day, it clicked. At around this same time, the kids had gotten really into Tintin. Now that the movie’s come out, you’re all familiar with Tintin, right? Remember Thompson and Thomson? The bumbling detective twins? 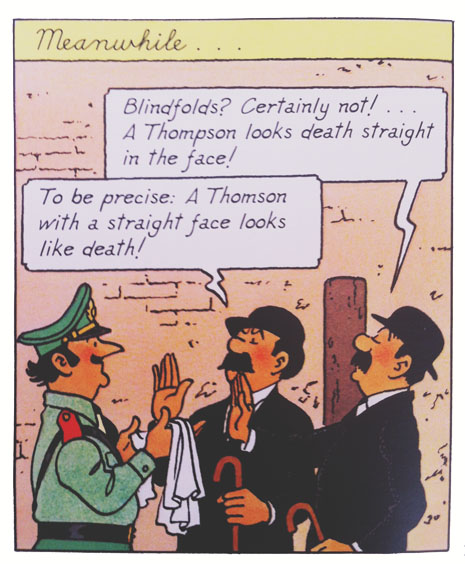 Well at some point in one of the stories, Thompson and Thomson are disguised as natives in some foreign land or other, I don’t remember which one. Egypt maybe? Anyway, Tintin bumps into them, and immediately sees through their disguise. He says, “Hello Thompson and Thomson,” to which they reply, “We’re not Thompson and Thomson! We’re friendly locals!” My kids understood this to mean, “We are twins and we match.” So, whenever they matched in any way with anyone else, they called attention to their status as friendly locals. I was epically pleased with myself when I finally figured that one out.

This has stuck with us. We Merkles still frequently refer to ourselves as friendly locals if we, for instance, order the same dish at a restaurant.

So when the moment arrived (the moment which inevitably comes into each of our lives) when I decided I desperately needed to make a big old light-up sign for the new hang-out room, what better thing to put on it than Friendly Locals? This is also because I tend to dislike enormous statement pieces, no matter how cool they may look, which don’t have any relevance to anything. I knew I wanted it round, and I knew I wanted a metal rim on it. But I couldn’t for the life of me figure out how I was going to come up with a metal edging for a huge round sign. I also didn’t want to spend any money on it. So imagine my glee when I noticed a big round white metal hoop sitting outside the Salvation Army. I zoomed in and purchased it for $2.00. It was the edge of an old patio table that had lost its middle somewhere along the line. And it was the perfect size – 4 feet across. I scored a scrap of wood at the lumber yard (the lovely lumber yard men gave it to me for free because it was just a cover sheet for their other plywood!) and there we had it! I painted on the sign, we drilled holes and installed lightbulbs, popped it into the frame, and that was it! 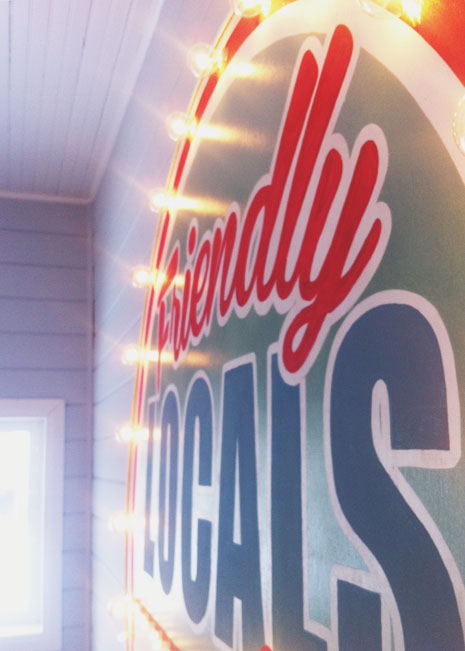 And since this post is already a mile long, I’ll just have to tell you another day about how the rip in the arm of the sofa came to pass . . . at roughly 2:00 a.m. Christmas morning while Ben and I were peeling open the upholstery and Ben was sawing through the frame of the sofa so we could get it through the door and into the room . . . and maybe I’ll get around to taking a pic of my awesome new couch in my living room . . . one that I did NOT upholster myself. But right now I have to go do about a metric ton of laundry because I do not have the same successes and victories in my laundry lifestyle as my sister.