I’d like to introduce you to a new blog called re: flect-I that some of the women at Christ the Word Church in Toledo, Ohio have started. Here’s what they say about it: “re: flect-I is an unusual name, isn’t it?  It was created because of our desire to reflect our heavenly Father more and more as He conforms us to the image of His Son, Jesus Christ.“ 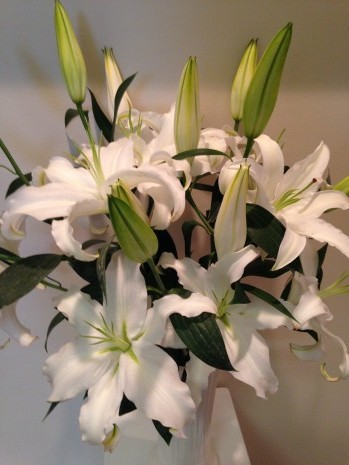 May your Resurrection Sunday celebrations be blessed!

Rachel wrote her testimony a few posts back, and I thought it was time to follow her good example.

My parents were good people who raised us four kids to be God-fearing Protestants. Dad had grown up Methodist, and Mom’s family attended the Episcopal Church. We attended church regularly, at least often enough that it was not foreign to me. My folks taught us to pray before dinner and at bedtime. I always believed that Jesus was the Son of God. We had no denominational affiliation because Dad was in the military, so on the air base we attended the Protestant service.

Dad retired from the military, and I started junior-high school in southern Texas. My family attended the Presbyterian Church, and I became actively involved in the youth group and the choir. In fact, I joined the church. During those years I remember going forward at a big revival meeting in a stadium that a friend had taken me to. It was quite an emotional event, and I really thought I had changed. But every day as I looked in the mirror, I was sorry to see the change fading away. But I continued to participate in church activities and youth group retreats. Church became more of a social function than anything else. I had many wonderful friends during those years, and some of them are faithful Christians today.

After high-school graduation we moved to Idaho, and I started college as an English lit major. I never even considered trying to find a church to attend; it just didn’t occur to me. Academics were never as important to me as the social life, but I managed to pull decent grades. I led a very self-centered, egocentric life enjoying my friends and parties, much as I had in high school. However, the 70’s were a time of social upheaval and students in particular were looking for meaning in what they saw as a meaningless world.

I was being fed a message of hopelessness and meaninglessness by my English professors. I remember one in END_OF_DOCUMENT_TOKEN_TO_BE_REPLACED

First I’d like to say that our Second Ever Femina Conference went super deluxe, and God kindly answered our many prayers regarding it. One of those prayers was that all the grandkids would be happy during all the hubbub. Bekah’s kids were at school during the conference, but Heather and Rachel had to do a little bit of fancy juggling. But all went well. Shadrach was a good baby and enabled Rachel to give her talk, and then she got to wear him in the front pack (the perfect accessory to her outfit) during the Q and A.

We appreciated each and every lady who came, as well as all the behind-the-scenes folks who made it all happen. We are already thinking of ideas for next year. Will life be calmer then? Will we have more prep time? Ha! I doubt it. But I’ll let you in on a secret: John Piper is coming to speak, Lord willing, at next year’s Grace Agenda conference, so snag your hotel reservations now!

From time to time it’s nice to link up to a few spots you may not know about. So that’s what I’m doing now.

For example, many of you are familiar with Valerie, who comments regularly here. She has her very own blog and today she wrote a piece called “How Not to Comment on Blog and Facebook Posts.” This is Valerie at her best, on a total spree!

Next is a little webstore called Arrayed and Adorned devoted to modest swimwear for little girls. Bet you weren’t aware of that one! Crystal is also an occasional commenter here, and even though summer is half-way over, it’s not too late to take a look at her stuff. Who knows? Maybe some will even be on summer clearance.

Finally, another commenter, Hannah, has a blog worth reading. I’m betting she will produce a book some day. She’s a mother of many sons and has much wisdom. Fun to read too.

For those of you who are not reading twitter or following all the comments on Anthony Bradley’s blog, you will be astounded to see that this very same gentleman wrote a great article one year ago (almost to the day) for World magazine called “Libel is not Love” in which he chastises Christians for doing the very thing he is now engaged in doing to my husband. And the amazing irony is that he is taking Rachel Held Evans to task for going after Mark Driscoll! The world goes round.

He says, “My concern is how Christians handle conflict with other Christians in public.”

Our concern as well, Dr. Bradley.