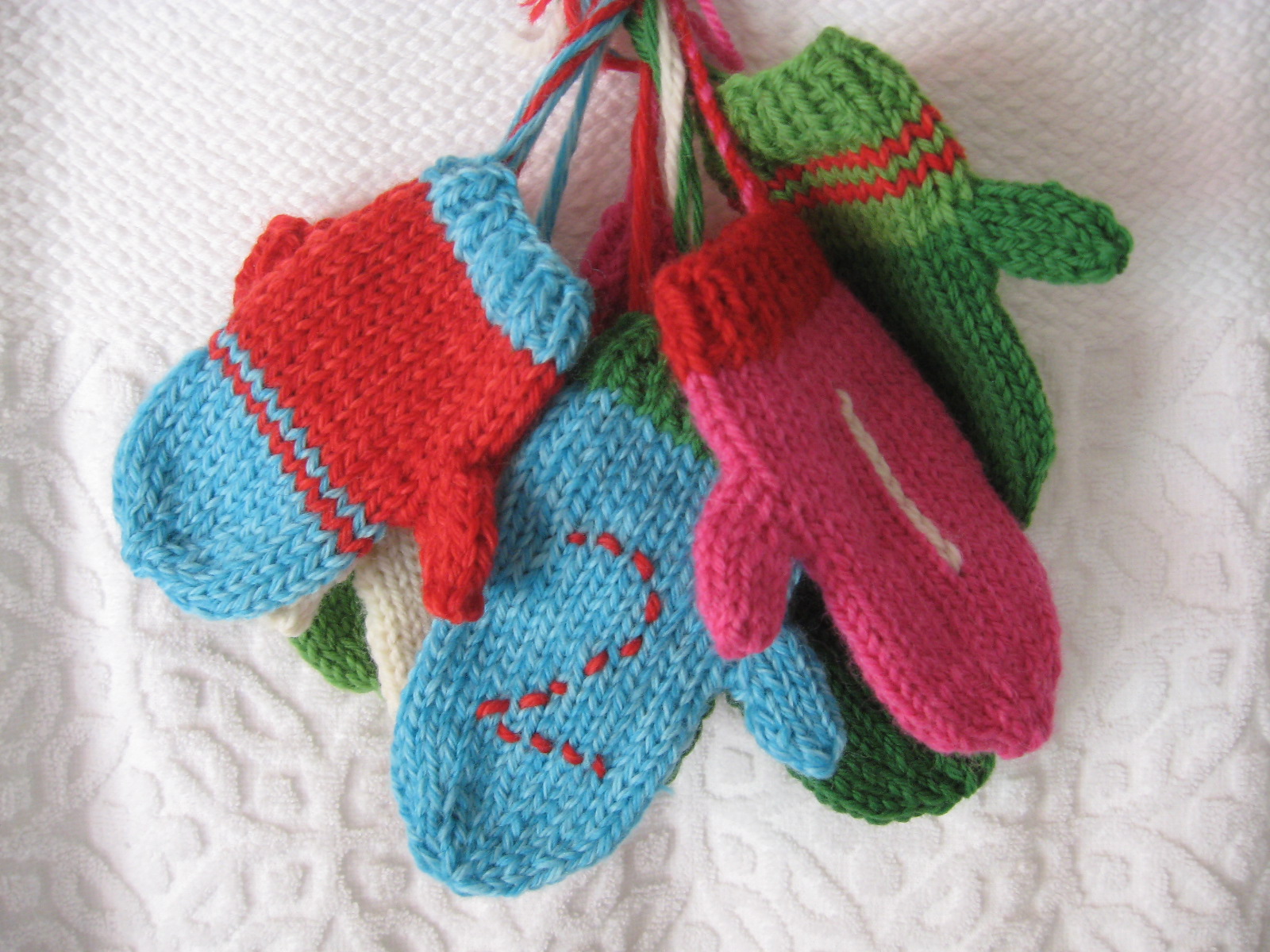 So last year around the last day of November we all had a little discussion about Advent calendars and how to make them and ideas for them, etc. The trouble was, the discussion left everyone about 30 minutes at a very busy time of year to try to crank something out. This year, I decided to make another Advent calendar contraption, but I thought I would share the pattern with you all in case any of you knitters want to make one too. It goes very quickly, although you can see that I have not even sort of finished mine yet. The concept is a sort of garland to hang across a mantle or curtain rod or anything with a number on each mitten. The pocket for a treat or clue or something would obviously be inside of the mitten. The string will probably just be an i-cord, and I am waiting to do all the numbers until I have them all done to make sure the colors are evened out. I go the idea from one that I saw as a prop in a Country Living photo shoot, although theirs had hats also. So, knitters, get going!

gauge: doesn’t so much matter (yay!)

extras: stitch marker, tapestry needle, and scrap yarn (but we all know you have that already)

cast on 26 stitches loosely onto a double point needle. Evenly divide stitches between three needles, place a marker at the beginning and join, being careful not to twist.

Rows 1-5 knit in a P1, K1 rib, slipping marker at the beginning of each row

Row 13 Knit to marker, slip marker, M1 ( make one by lifting up stitch in front of stitch on needle and knit through the back loop), knit to last stitch before marker, M1, slip marker and knit to the end.

Row 15 Increase 2 stitches in the same manner as before

Row 17 Increase as before -8 stitches between markers

Row 18 Knit to marker, slip stitches between markers onto scrap yarn, knit to end of row

cut yarn and thread the tail onto your tapestry needle, and then through each of your remaining stitches twice. Pull tight and weave in your end

Thumb: slide your eight stitches onto three dp needles, and start new yarn. Knit 5 or six rows. Work one decrease row by knitting two together the whole way around, and close with a tapestry needle the same way as before. Weave the tail down and close the join of the thumb to the mitten body if necessary.

Later, when I finish all the mittens I will figure out what I am doing for the loop up top. It will probably just be a crocheted chain loop with an occasional pom pom on the end, and the numbers will probably be different. Some embroidered, and some in duplicate stitch. But more on that later. Please comment if you have any questions, or if this is not clear.

note: I did not include any comments about switching colors, but the majority of mine are contrast at the rib only, although there are stripes and other patterns occasionally. I will leave that part up to you and your creative genius, just make sure that the mitten will still show a number well.