So here it is – Shrove Tuesday. Isn’t it called Fat Tuesday in the South? Or is that just New Orleans? Either way, today is the day before Lent, and here in England that makes it Pancake Day. No gumbo, no jambalaya, no spicy foods, no revelry, no Mardi Gras parades . . . just a nice, simple, understated, very English approach to the day before Lent – pancakes.

The tradition began apparently, because people were cleaning out their cupboards in preparation for the 40 days – and needed to use up all the eggs and flour. Thus the pancake. And an interesting observation that I read somewhere was that the Egg theme at Easter is nothing to do with pagan fertility symbols being surreptiously brought into the resurrection story . . . it’s far more likely that the hens kept right on laying all the way through Lent – and so by the time it got to be Easter everyone had a vast quantity of eggs that they needed to deal with in some way. Coloring them and making up games for children with them is a very clever use of resources I have to say!

Now, I don’t do Lent. But I can definitely get into Pancake Day. I mean, in the same way that I can appreciate Bonfire Day even though I’m not English, I can also really get into the spirit of Pancake Day even though I’m not a 15th century Catholic. There’s just something so festive about having a silly dinner. A hands on, everyone participates dinner that involves no veg whatsoever, and in which children get to have ice cream in the main course. I mean – how could you not jump at the excuse?!

The pancakes of course are really crepes – they’re not our puffy pancakes with maple syrup. They’re crepes, and apparently are traditionally served (in that understated English way again!) with a squeeze of lemon and a bit of sugar. But in keeping with perhaps more of the Fat Tuesday approach to things, I busted out the Nutella, vanilla ice cream, maple syrup, sauteed apples, and let the kids put whatever they wanted on them. First though, I let each of them fry up their own pancake – and then doctor it up. Everyone ate in the kitchen and took turns at the stove . . . loads of fun, and although a terrific mess, it’s quite a low maintenance dinner really.

It was also good, because tonight was one of the few nights that Ben wasn’t home for dinner as he had quite the posh little hoo-ha to go to at his college tonight. And they didn’t serve him pancakes as a matter of fact. He brought home the menu, so let me just give you a little synopsis of what HE had tonight! First, drinks in the ante-room. Then, dinner in the Hall. Here’s what the Hall looks like. 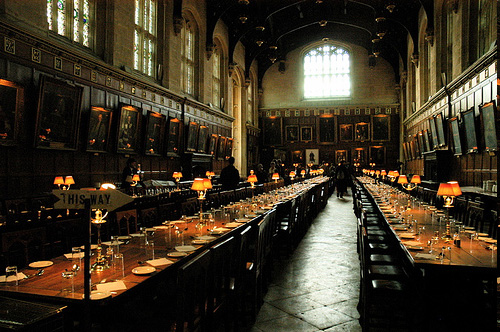 You can’t see it, but up there at the front is a portrait of Henry VIII and Elizabeth I.

First course: Marinated Vegetable Terrine with Mozzarella Balls and Sun-blushed Tomato Pesto served with the college white wine, Saint-Veran Les Pierres Blanches 2005. Second Course: Lobster and Quail Egg Souffle with Cambozola Cream Sauce. Third Course: Char-grilled Fillet Steak with Cep Gratin, Dauphinoise Potatoes, Root Vegetables, and Purple Sprouting, served with the college red, Chateau Fourcas – Dupre Listrac – Medoc 2001. Next up, Panacotta with Rhubarb Soup and Blood Oranges, served with the college Port. With the port, they all stood and toasted the House (i.e. Christ Church college) and the Queen, since she is the “Visitor of the House.” And finally, coffee and boxed chocolates.

Is that, or is that not, just the sort of excess that leads to things like the French Revolution? I ask you.

So, if you’re out of ideas for dinner tonight (those of you in the time zones that are still before dinner!) then you’ve got two new ideas. Either you can shoot for Ben’s meal, or you can go for mine! Personally, I would vote for lugging in a new tradition and going for the pancakes.