Well now. This week has turned out to be rather different that I was expecting a week ago. As a matter of fact, it’s been one week to the day since we got the phone call from Nate . . . saying that he thought they might as well bring their four kids over for Spring Break. They’d been wanting to come over again this year, and it was looking all of the sudden like it was now or never. “Carpe Diem” they thought to themselves, not to mention that there was a great deal on tickets.

We, of course, were thrilled to have them come – and the cousins were all super whipped up to see each other again after a six month separation. So far so good, right? The trouble was that we started having a lot of, “Oh wouldn’t it be fun if . . . ” sorts of conversations and there weren’t any adults around to stop us. And the long and short of it was that we decided to road trip it to Rome.

Right. Rome. With nine children under the age of ten, and three and a half days to plan it. Like I said, they called last weekend . . . and I am currently sitting in a hotel in Heidelberg where we are spending our second day.

On Thursday, the Merkles picked up the minibus while the Wilsons were busy flying across the Atlantic. Yes. A minibus. Not only that – a minibus that has “TVR SELF-DRIVE OXFORD” emblazoned on the side and front in the most un-subtle way you could imagine. We, to make a long story short, do not blend in. In case any of you thought we might be mistaken at first glance for native Europeans the answer is that no European so far has failed to stop dead in their tracks when they catch wind of us and stare in a pop-eyed fashion until we depart.

Friday we will consider to be Day One. The Merkles hit the road from Oxford and picked up the Wilsons at Heathrow in the early a.m. We then zipped off to Folkstone and took the Chunnel over to the Continent. From there we cut into Belgium and had a breeze of a time until we hit Brussels . . . at which point we promptly got lost in a maze of tunnels under the city. The Brussels city planners seem to be incredibly coy about letting anyone know what the names of the streets are. The only street signs that we saw were . . . I’m not making this up . .completely blank. Eventually we popped loose out the other side and continued on our merry way to Luxembourg. A friendly Brussels resident that we met in the hotel in Luxembourg told us that it wasn’t our fault – he said that there are absolutely no street signs ever – and that no one can possibly enter the town without getting immediately lost in the tunnels. Apparently you have to live there for several years before you can figure out how to get anywhere. Trial and error I suppose.

Anyhow, we fetched up in Luxembourg and found our hotel. That little word “found” covers a good long stretch of forever in which we wandered the streets of Luxembourg creeping up on our hotel through ever tighter and tighter circles until we finally found it. The bad news however, was that the second they heard the magic words, “nine children” the front reception man immediately went into cardiac arrest and insisted that they couldn’t accomodate us under any circumstances – regardless of what we’d been told when we made the reservations. Eventually we reached a treaty – and they let us sleep in their hotel . . . but we don’t think that the man has recovered from the shock yet.

Next morning, (we’ll call this “Day 2”) we had a stellar breakfast in the hotel . . . children behaving in the most angelic way you can imagine . . . whole restaurant turned around in their seats and watching open mouthed (we’re definitely not in England anymore – the people don’t care if you see them staring) and the kids were living up to it in the most astounding way . . . until the 2 year old threw up. That took some of the glamour out of it for sure. After getting that little episode sorted out we took off to see the old city of Luxembourg. It was truly amazing. I knew precisely nothing about Luxembourg before we showed up . . . (remember we only had three days to plan, so finding it on the map was about as far as we got) but it is truly a beautiful city. It straddles an amazing ravine . . . and you’ll pretty much need to google up some pictures of it because it’s impossible to describe. Crazy fortifications, crazy tunnels in the fortifications, and general impressiveness all round. 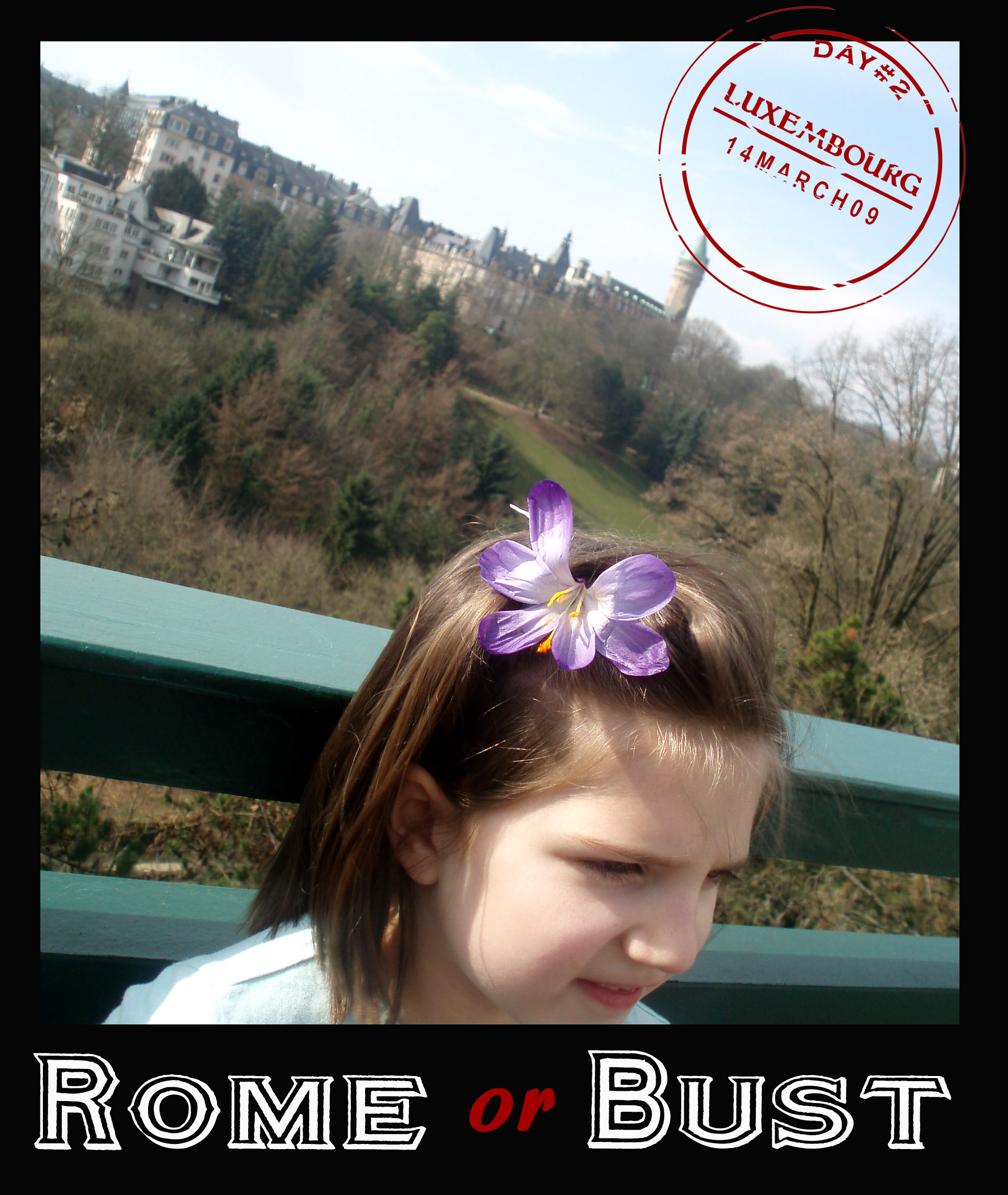 (Crocus were in bloom in Luxembourg) 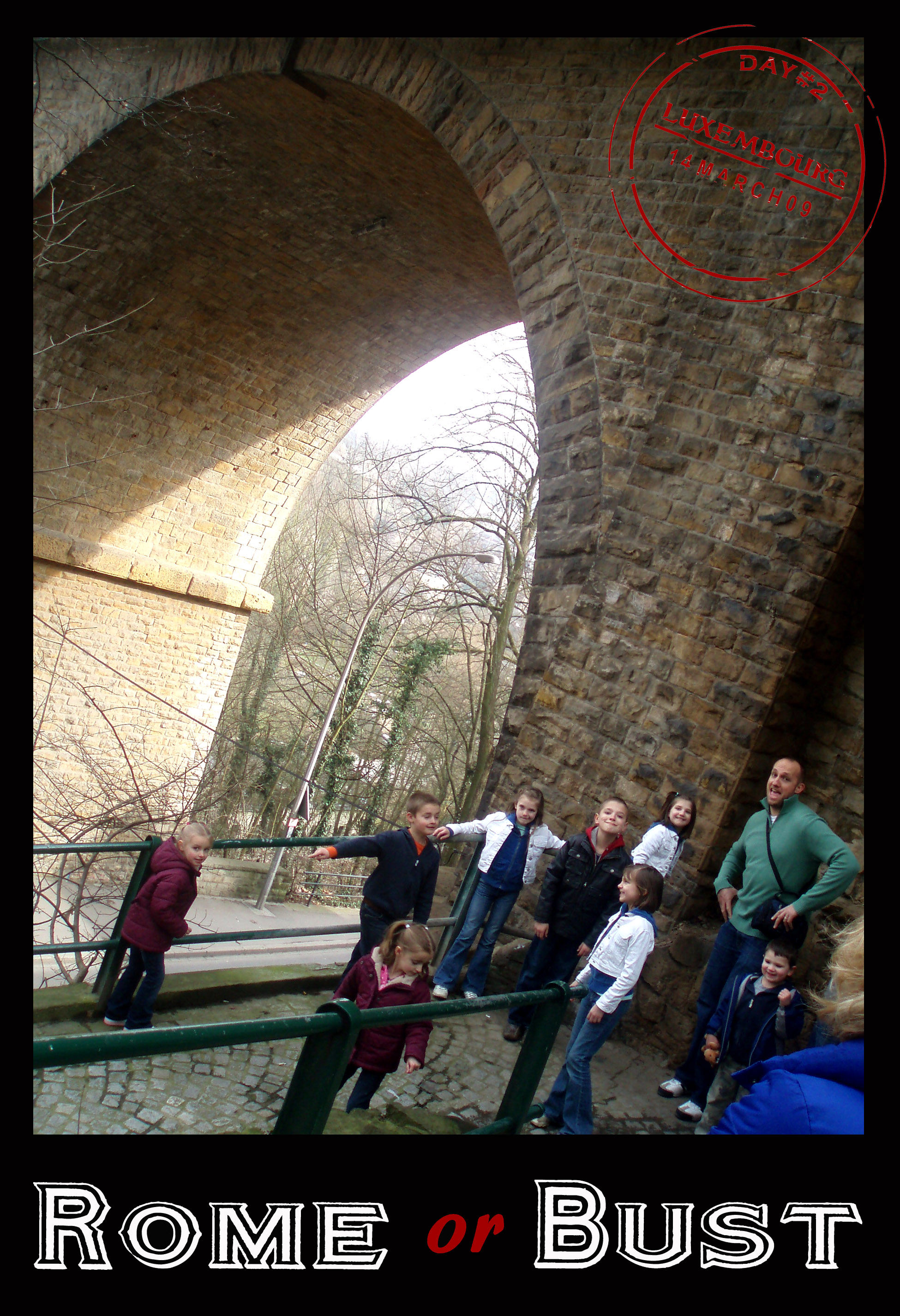 (Under the bridge across the ravine.)

Then, shortly before lunch, we were off to Heidelberg where we fetched up yesterday afternoon. The reason we stopped at Heidelberg was because Ben’s dissertation is on anti-trinitarian controversies in Heidelberg in the 16th century . . . so of course we had to stop in and see all the anti-trinitarian sites.

We have an unbelievable hotel – right in the center of the old city and just a hundred yards or so away from the church. The river is right out front – and we can see the old city gate over the bridge out one window, and the castle perched halfway up the mountain out of the other window. It’s truly an amazing place . . . and we had a terrific time wandering around the old cobblestone streets. This morning we got up and went to worship in the old reformation church . . . and it was unspeakably awful. So awful in fact, that we left halfway through . . . and that’s pretty impressive considering that the entire service was in German so we couldn’t even understand what the 22 year old woman pastor was saying. If there had been subtitles we probably would have been out sooner. We wondered to ourselves . . . “Would it be cool to have communion in this church? Or would it be horrible?” We decided it would definitely be the latter and we walked out – all of us, including the children, shaking the dust off our feet as we left! Yes. It was that bad. An incredible and far fetched story could be written about how bad it was – but I don’t have time right now so we’ll save it for later.

After that little un-edifying morning, we went up to the castle. And THAT was utterly amazing. I had no idea. Ben did of course, but then again, he’s been researching in minute detail so he knew all about which Frederick it was who added which wing to the castle and what happened when the Catholics arrived and sacked the city . . . the rest of us just hit it completely fresh and were absolutely amazed. 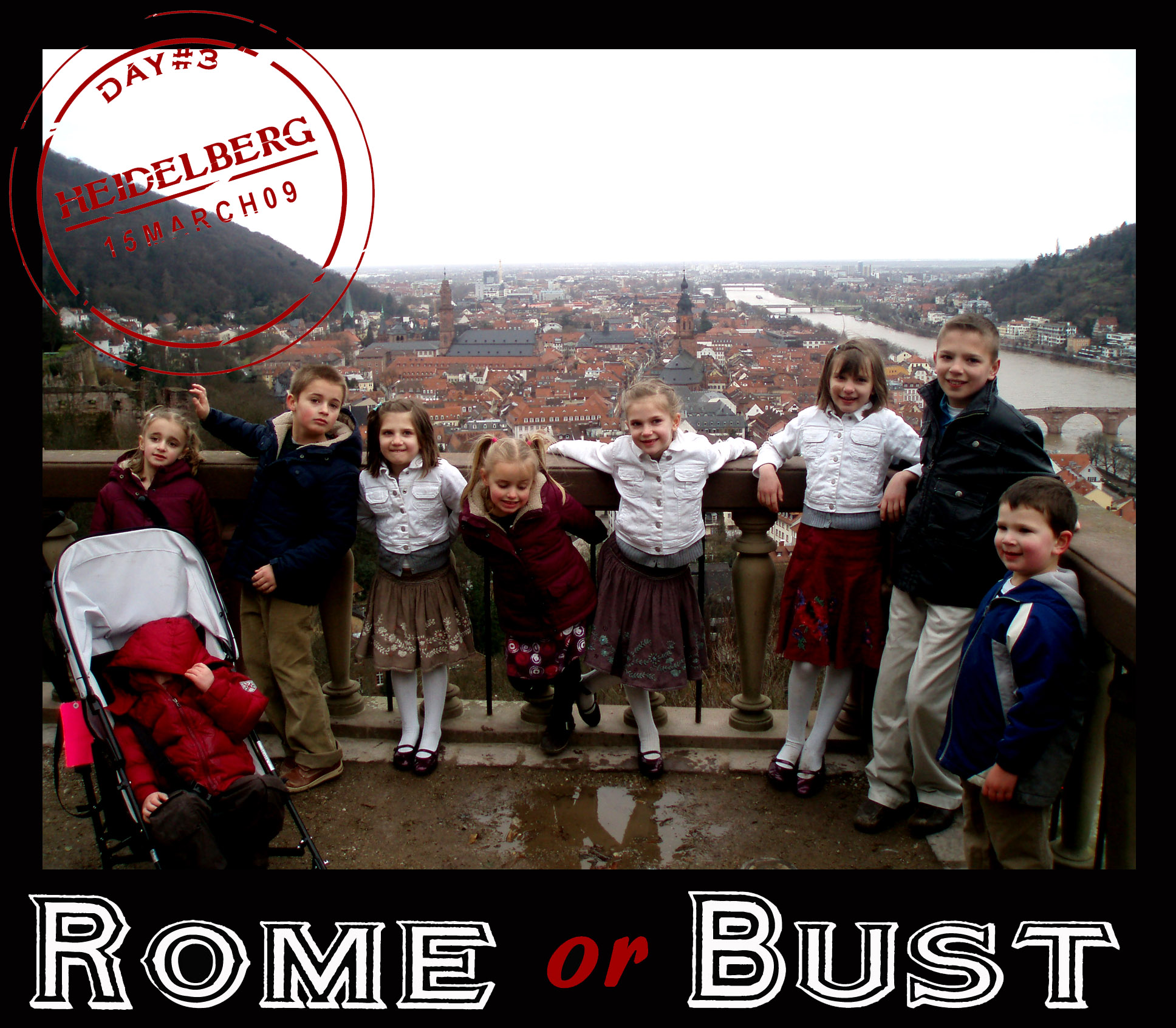 (The gang up along the wall at the castle – overlooking the city.) 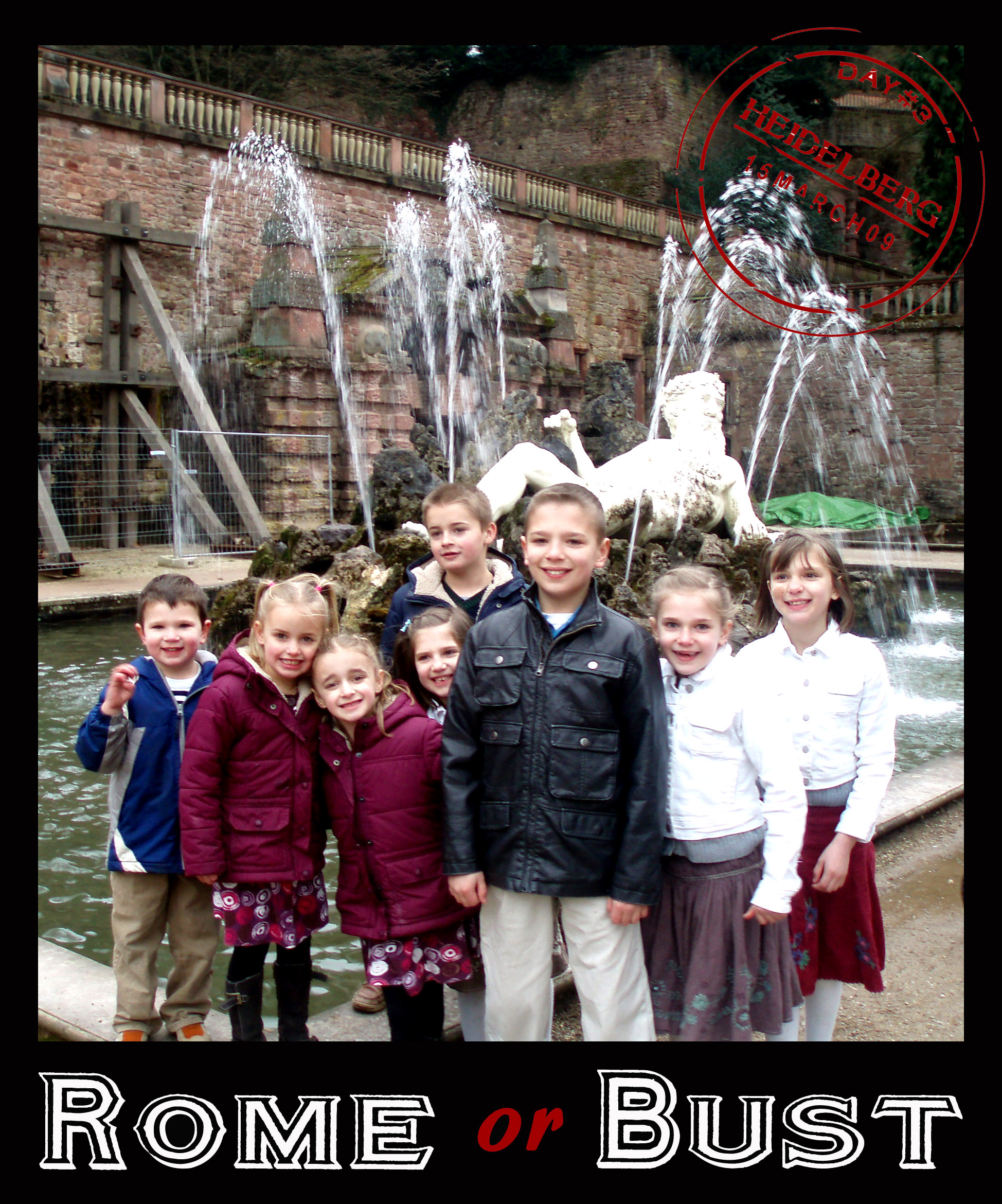 (In front of one of the fountains in the garden at the castle.)

We had dinner in the Heidelberg brewery – and the massive pan of fried potatoes and roast sausages they brought out for the kids was like nothing I’ve ever seen.

We are now officially at the end of Day 3 . . . and we’re preparing tomorrow to shoot the Alps. But Ben has to have a quick meeting in the University Library, and then we have to detour off the road in Bavaria so that we can see Neuschwanstein Castle . . . the kids found it in an Atlas about a month ago and have been begging to see it ever since. And seeing as we’re practically driving right past it, we could hardly say no! So we detour for that – and the goal is that we land in Pavia in northern Italy tomorrow night. Pavia was chosen because that’s where King Alfred stayed when he went on a pilgrimage to Rome as a boy. Apparently he stayed in a monastery there and signed his name in the book – which is still in existence! Our hotel tomorrow is right next to a very old monastery . . . but we’re not sure if it’s the same one. We’ll see. And either way, we can wave hello to the city where King Alfred spent the night. Of course, we didn’t have to go all the way to Italy to do that. We could have just driven an hour down to Winchester (his capital city) if we wanted to absorb the atmosphere of a city where King Alfred spent the night. But still. It’s nifty.

Right then. That’s our story. And if no one ever hears from us ever again, we’re likely lost somewhere between Heidelberg and Pavia. Either that or we’re back in the tunnels in Brussels trying to find our way out.