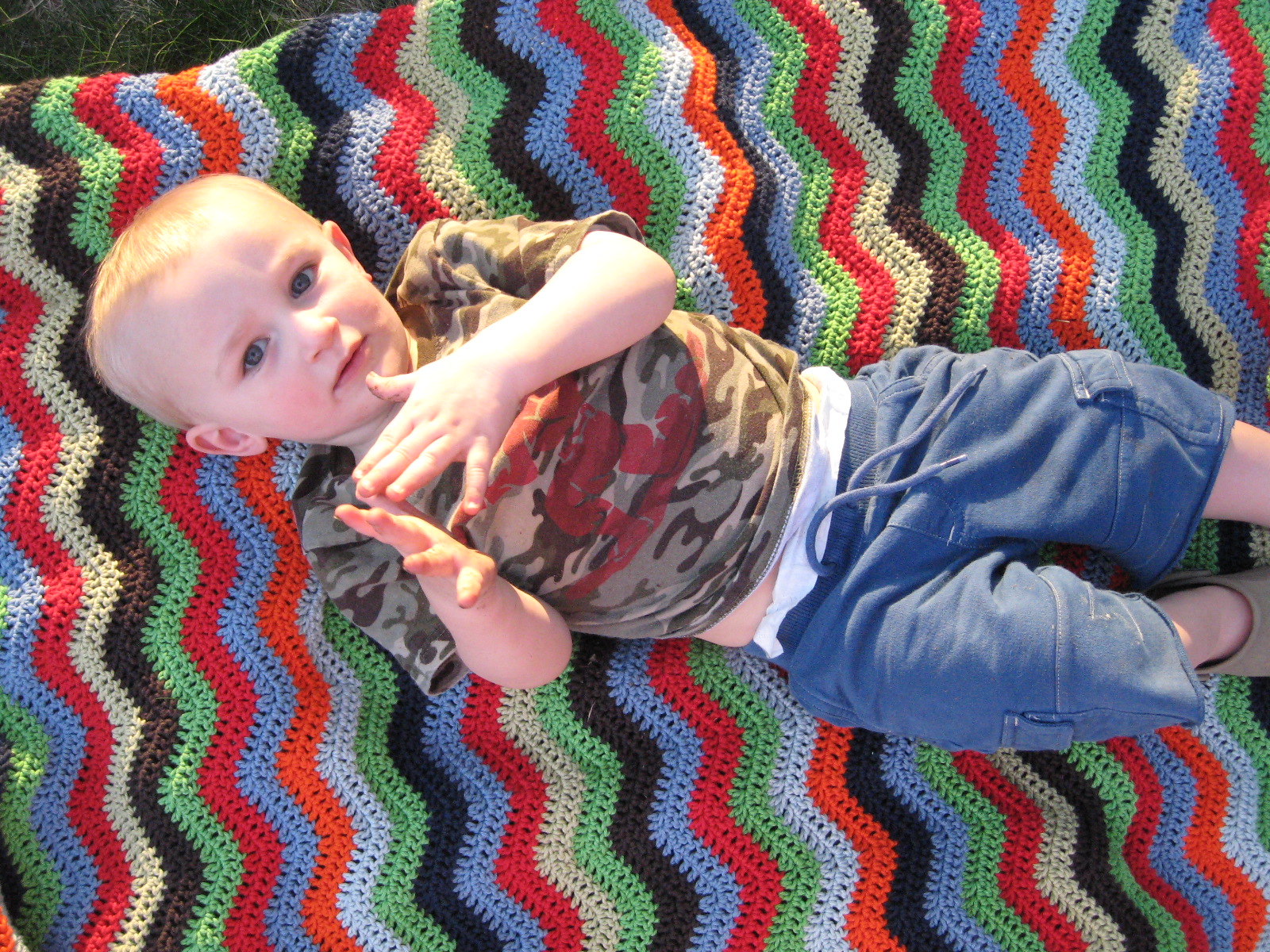 Poor guy – I really owed him this. When the twins were new and up in the night all the time (and that meant that we were also up in the night all the time), tricky things would happen. Sometimes (ok, almost all the time) Titus would wake up nicely swaddled in a pink blanket, and Chloe in the red one. To be fair to us, more often than not we would wake up to find that we had tucked some diapers into our bed, so it wasn’t just Titus who felt the brunt of our sleeplessness.

My tender domestic side suffered acutely. But now, what with diaper incidents and other mishaps, and even though we can tell the twins apart Â in the night, sometimes this little dude has to use a floral sheet or two. We do have white ones, but you know, things happen. So before he got old enough to notice, I made him this. Cute, huh?

But all this talk about the sleepless nights has made me remember the highest of high points for us as an up-too-much-in-the-night couple.When the babies would wake up to nurse, Luke would get them for me, and I would sit up in bed and nurse them. He would change the diapers and burp them at intervals. It is worth a detour to note that there were a lot of diapers. It seemed quite often that we would know that someone had done it, but it was not clear who, and Luke would be trying to ascertain that critical piece of information while I chipped in with clues. No sooner would he have cleared up the situation but one of them would fire off again, and we would be back to square one. Because if there is one thing we know about newborns, it is that there is no real method to the madness.

In this way we could cruise through between four and six diapers at a feeding, in the dead of the night. I would sleep with my head dangling off to the side, because no matter how you slice it, you can’t nurse two babies while sleeping in any natural position. So this is how it would go. Eventually I would wake back up with my arms asleep and neck hurting and two infants konked out on top of me.

So one night we had followed the routine up to this point when I woke with a start and the feeling of desperation. I needed to lie down; I needed to set these babies down. But, I also needed them to stay sleeping. So, I tried to wake Luke up. Nothing. Well, since leaping out of bed gracefully with two sleeping infants who were propped up on pillows, and then somehow gently getting them into the crib with one arm apiece was out of the question, I kept trying to wake him up.

I started kicking. Just a nice quick toe-punch to the shins. I wouldn’t say nothing happened, but it wasn’t much. After a lot of kicking and sort of sharp whispering, he sat up. I was relieved. But it was pre-mature. He didn’t do anything. Slowly, he got out of bed and turned to lean on it. Then, after a minute or two, he gathered himself up and headed out of the room. I don’t think I need to tell you that I was firing off lots of urgent questions at this sudden development, but he was on a mission and couldn’t stop to talk.

After a bit of frustration and an effort at moving the kiddos myself, I bit the bullet and waited. Presumably he had decided to use the facilities before helping his wife out. I was annoyed in that sort of middle-of-the-night kind of way. After a few minutes he reappeared in the door, but passed the room by.

At this point I was pretty much whisper-shouting, which is hard to do, but if you practice you can get it. He passed by the door again and I saw it – he was bouncing a baby. Patting it on its little air back, and soothing it back to sleep. He was being the most selfless and kind Daddy, walking the hall in the middle of the night with his dream baby. I hate to admit how totally unamused I was. I was frantically (whisper-shouting) “Stop it! Stop it! YOU do not have a baby, I have the babies! Wake up! Wake up! Get the babies! THAT IS NOT A BABY! WAKE UP! YOU ARE NOT HOLDING A BABY!! I HAVE THE BABIES, BOTH OF THEM AND YOU MUST WAKE UP AND TAKE THEM!!! WAKE UP! LUUUUUUUUUKE!”

Eventually he did wake up and just came and took them and sweetly tucked them in as though nothing had happened at all. And you know, I think I was asleep again before he had even finished laying them down. To all of our credit, we had a really good laugh about it in the morning (when I was not at all annoyed), and it is now one of our fondest memories of the early days with the twins.

24 thoughts on “Blanket for the man-child”