Well, I finished up the Easter dresses, but Easter morning was such frolic around here that I never took a picture of them. I thought about it later – while we were throwing flour all around our kitchen between church and lunch while frying flatbreads. The timing was not perfect, and I thought I’d grab a shot later. Later turned out to be after the Jello which had more of an impact on some of the dresses than others. Either way, they have all been effectively stain treated, and just need a little touch up with the iron before I am willing to share them.
Of the things that I finished and also took pictures of, first up has got to be the diaper bag. I am very painfully happy with this little project because I did it without a pattern and it is even lined, and the zipper works! What more could a person ask for in a diaper bag? I suppose it helps that my taste in diaper bags runs small and streamlined! 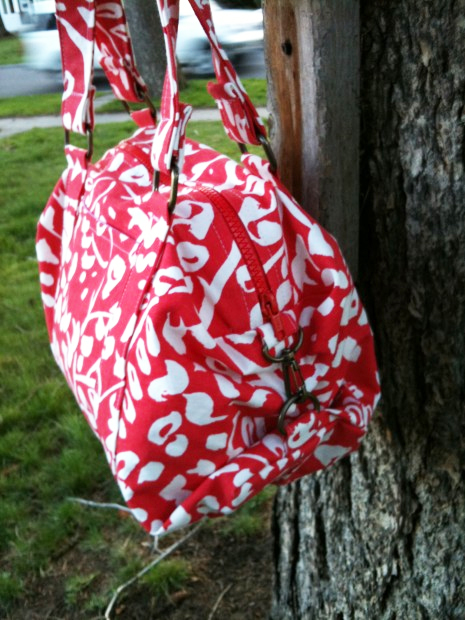 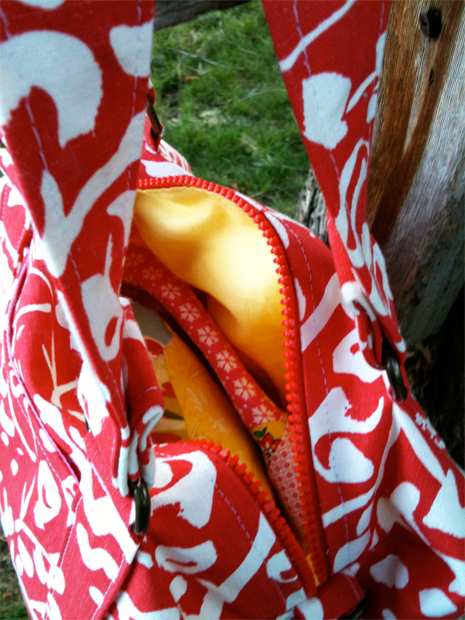 You can see that inside is something else fabricy – sort of wadded up in there. Well, let me tell you about that little journey. While in line at the local Joann’s a bit ago I saw some lemon yellow flannel in the remnants and snagged it. I planned to make a receiving blanket out of it, but didn’t get around to it for a while. Then, one night, seized with the reality that eventually this baby will come, I busted it out. Turns out that I didn’t really have any cotton fabric in that size that looked sparky with lemon yellow. Rather than delay making the blanket until the next day, I rummaged out a couple of quilt blocks that I made another time and figured I could make some more and just get the thing done. And that is what I did. And I stayed up later than I ought to, and it was all very jolly. I finally finished the top, and went to bed – leaving only the binding undone. In the morning TItus woke up first and tried out my sewing scissors all along the top-most edge (it was folded very nicely on the ironing board), using very precise snips straight into the body of the blanket. The damage was actually very minimal considering that he must have been at work for some time on it. And not even one cut on the folded edge right below. Now I call that thoughtful! If this was in the “Just So Stories”, this little section would have to conclude with “and that is how the blanket got it’s intrusive binding.” 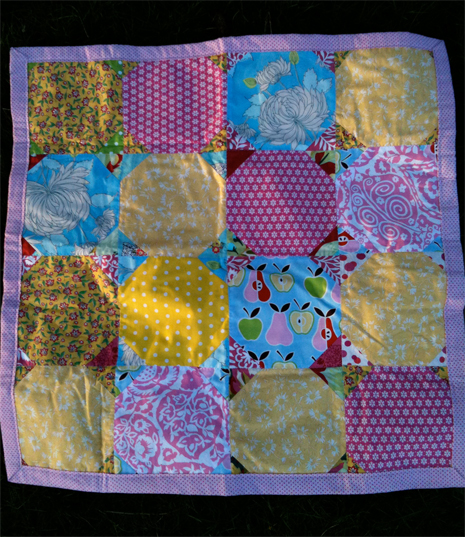 And finally, I finished off the crocheted blanket, hopefully just in time for You-Know-Who.

I know what project I’d like to show off next, but we’ll have to see if she co-operates!