Just thought I would be helpful and give you all a heads up that Advent will arrive in November this year. Otherwise, since Christmas is on a Saturday, we would only have three Sundays before Christmas, and as you know, the Advent wreath has four candles to be lit, one for each week of Advent, with the Christmas candle lit on Christmas Day.

And if you want to give out your Advent gifts to the kids, you’ll definitely need four weeks to do that! So my grandkids will be getting their Christmas jammies on Saturday, November 27….right after Thanksgiving! Believe it or not, I found fifteen pairs of cute Christmas jammers. (No, they don’t all match….too many variables!)

I was feeling a little smug about doing some Christmas shopping early this year, and I bought the three Femina girls some adorable snow boots, had them wrapped and stashed in the forbidden Christmas closet. But then, trouble struck. Actually, it turned out all for good. But Rachel was chatting with me in the kitchen and mentioned that she had just ordered herself the cutest pair of snow boots….so I sneered at her a little and asked what kind they were. Sorel. Oh great. What do they look like? Yep. She ordered herself the same pair (in a different color). What could I do but tell her the truth! Then Heather announced that she needed boots, so maybe she could buy the extra pair. Well, that’s all I needed. So I went downstairs and got the girls their Christmas gifts! Now they all have a new pair of snow boots in time for the first snow. Here’s a pic of them modeling those early Christmas boots! Pretty cute, huh? 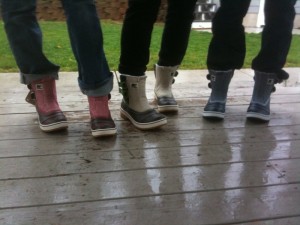