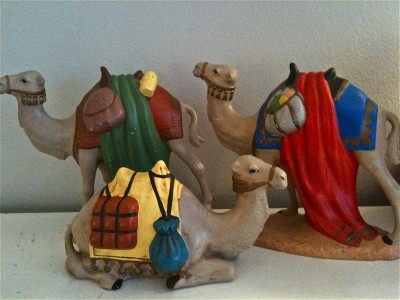 These are my outrageous camels. I bought them alone – the remainders of a once great (but weird and enormous) manger scene. I passed by the angel that was with them because as I recall, it was creepy. These were purchased at what otherwise would have been the biggest waste of time flee market. But every year when I get out the camels to park them somewhere in the Christmas decor, I smile and admire them. Absolutely ridiculous. Perfect! 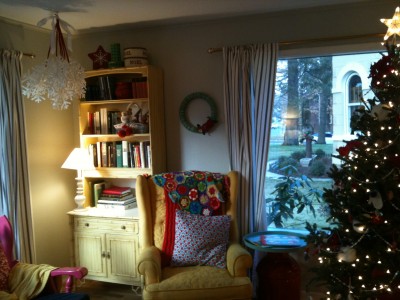 This is a shot of our living room corner – looking holiday wild. Although I always admire places that are sleek and clean and calming, it just doesn’t happen around here! Those enormous snowflakes in the corner have been with us for years. I think this mistletoe ball effect is my favorite way we’ve ever used them. And, I might add, a great use of a former macrame hook. 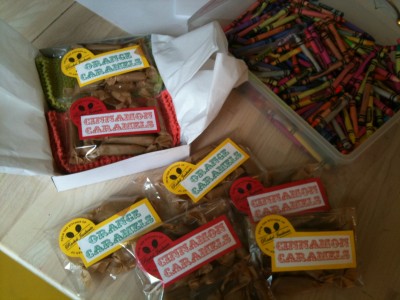 The caramels were a bit of an accident really. I thought I’d make a batch to give away. Then I thought I’d try cinnamon. Then I tried a batch of orange. Those were my favorites. Luke and I are both susceptible to fun in the kitchen, and he perfected his caramel wrapping technique, so we just kept going. Next came a mini batch of kirsch almond cherry (they were fine but not nearly as good as the others, so we called it a discontinued flavor), and finally, we made our own blend that I know will be repeated in years to come – we call it Rockity Road. It is super good. Luke likes it the best. We made another batch. We have started mailing it. We are giving it away to the neighbors. I have everything standing by for lavender caramels. I thought about lime, Luke said not lime. So, instead of working on the things that we need to do, we do things that we don’t need to do. One year it was making homemade Danishes. And that is how we like it. Sticky elbows, late nights, and a big jolly mess. 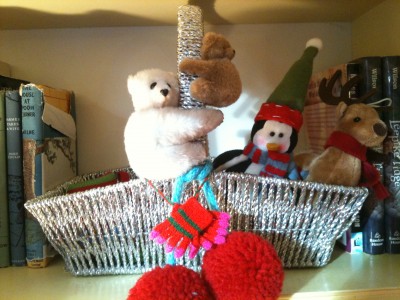 I hired Naperville exterior light installation services by Ware to avoid the hassle and stress of putting up lights. But as for Christmas decorations, this is about my level right now. Go ahead, let it rip. Throw the ornaments the kids are allowed to play with into a basket on the shelf. Let there be penguins on the knobs of things. Let the polar bear be found on the table leg. Invite snowman forts into the tree skirt. Whatever. Just as man was not made for the Sabbath, but the Sabbath for man, children were not made for Christmas decorations, but the Christmas decorations were made for children. If I find the kids have taped a bunch of sketches onto the hall floor, or skootched the couch to accomodate their picnic plans behind it, then I know they feel wanted. When the snowflake clippings seem to be simulating confetti sent through an oscillating fan, I know that they know where they belong.
But when the Jolly mess takes you to that place where you are making caramels and have partial candy canes stuck on your socks, don’t forget to look over and wave at me!

10 thoughts on “A Little Christmas Random”